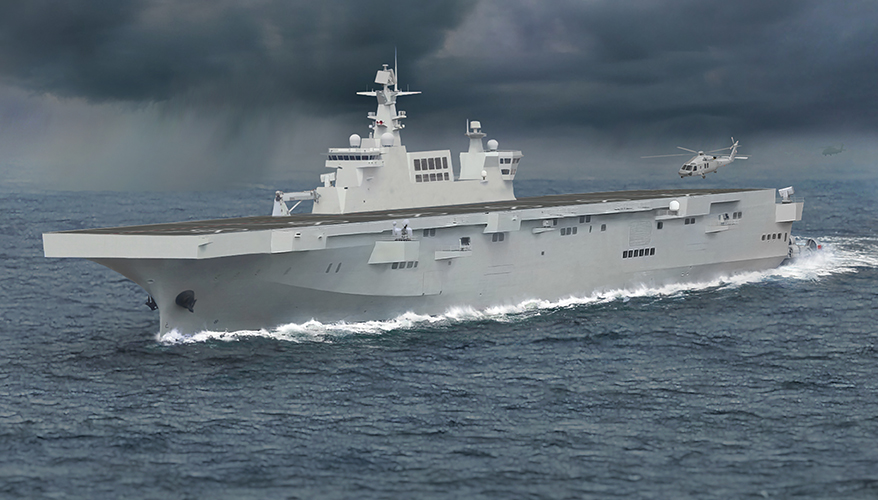 China is bulking up its fleet of amphibious vessels as it embarks on a major naval modernization program to enhance its ability to conduct operations globally. The nation’s new platforms include its Yuzhao Type 071 amphibious ship and the Yushen-class Type 075 amphibious assault ship.

The Type 071 and Type 075 will be “the backbone of the future amphibious fleet,” said Bryan Clark, director of the Hudson Institute’s Center for Defense Concepts and Technology. Beijing’s plan “in the near- to mid-term is to continue to build out the fleet with these newer, larger ships.”

The Type 071 has an estimated displacement of more than 19,855 tons compared to about 25,900 for the U.S. Navy’s San Antonio LPD-17 class amphibious ships, according to a 2021 Congressional Research Service report, “China Naval Modernization: Implications for U.S. Navy Capabilities - Background and Issues for Congress.”

China commissioned the lead ship of the Type 075 vessels, the Hainan, in April.

“The Yushen-class are highly capable large-deck amphibious ships that will provide the PLAN with an all-aspect expeditionary capability,” the Pentagon’s China report said. “The Yushen-class can carry a large number of landing craft, troops, armored vehicles and helicopters.”

The Type 075 measures an estimated 237 meters in length, according to a paper by the Center for Strategic and International Studies, “China’s New Amphibious Assault Ship Sails into the South China Sea.” It is smaller than the U.S. Navy’s Wasp- and America-class amphibs but is still one of the largest in the world.

“The Type 075 features a full-length flight deck for helicopter operations, which in time could also serve as a platform for short-takeoff and vertical-landing aircraft, should China develop a reliable airframe for that environment,” said the report, which was authored by analysts Matthew Funaiole and Joseph Bermudez.

Additionally, a floodable well deck situated in the stern of the vessel allows hovercraft and other vehicles to disembark, it noted.

The vessel will also reportedly be able to carry 900 troops, according to the study.

The nation has plans to build three of the Type 075 vessels. Sea trials are expected for the first ship this year. All three amphibs will likely be commissioned by 2025, according to CSIS.

There are even discussions of a potential follow-on Type 075A variant, or a Type 076 vessel, Funaiole said.

A future Type 076 vessel could be equipped with electromagnetic catapults, which would enhance its ability to support fixed-wing aircraft, making it more like an aircraft carrier, according to CRS.

Both the Type 071 and Type 075 will offer the PLAN greater capacity, endurance and flexibility for long-range operations relative to legacy landing ships, which China has reduced in number over the last decade as it removed obsolete units from service, the Pentagon’s China report said. Additionally, both the Yushen and Yuzhao can carry several of Beijing’s new Yuyi class air-cushion medium landing craft and several types of helicopters, as well as tanks, armored vehicles and marines for long-distance deployments.

The People’s Republic of China’s “expanding fleet of large modern amphibious warships will enable it to conduct a wide range of expeditionary operations wherever PRC interests are threatened or in support of PRC participation in UN-sanctioned peacekeeping operations,” the report said. “The expansion of naval operations beyond China’s immediate region will also facilitate its non-war military activities and further legitimize the PRC’s growing global military posture, including its base in Djibouti.”

Amphibious vessels could enable operations for asserting and defending China’s claims in the South and East China Seas, humanitarian assistance and disaster relief, maritime security operations and noncombatant evacuation operations, according to the CRS report, which was authored by naval affairs specialist Ronald O’Rourke.

They could also be used for “naval diplomacy” such as port calls and engagement activities, the report said.

But more ominously, the vessels would also be of value for conducting amphibious landing operations in Taiwan, it said. Taiwan is a self-governing territory which Beijing considers part of China and desires to bring back under its control.

However, China’s significant investment in its amphibious fleet does not necessarily portend an invasion of Taiwan, the Pentagon report noted. Such maneuvers are notoriously difficult, and success depends upon air and maritime superiority, the rapid buildup and sustainment of supplies onshore, and uninterrupted support.

“An attempt to invade Taiwan would likely strain China’s armed forces and invite international intervention,” the report said. “These stresses, combined with China’s combat force attrition and the complexity of urban warfare and counterinsurgency, even assuming a successful landing and breakout, make an amphibious invasion of Taiwan a significant political and military risk.”

China observers should not conflate Beijing’s buildup of amphibious vessels with an impending invasion, Funaiole noted.

“I don’t think that’s the direction we’re going,” he said. “These are assets that could be leveraged in any number of ways.”

Meanwhile, despite making investments in new vessels, China still has a large inventory of aging, unsophisticated ships in its fleet, Clark noted.

“They are in the middle of transitioning from essentially a World War II-, early Cold War-era fleet,” he said. However, the fleet is very diverse and is similar to the amphibious fleet the United States had during the Cold War, Clark said. It is made up of tank landing ships that can drive up onto a beach and open up to allow troops to exit, as well as large cargo vessels.

Today, China’s amphib fleet would not look too dissimilar from Saving Private Ryan, he noted, referencing the American war film set during D-Day.

Beginning in the 2010s, China began to replace its legacy vessels with newer systems, he said. The Type 071 and Type 075 are more formidable with increased defensive systems and improved sensors and command-and-control capabilities.

“They’re definitely an improvement over what they had, but until they build out … an entire fleet of these newer versions of the ships, they’re still going to have a chunk that’s still this older level of technology,” Clark said.

“They have a lot of shipbuilding capacity,” he said. “They’re putting out lots of ships [and] they could put out a lot more if they wanted to shift their production from commercial shipping to military.”

It wouldn’t be difficult for China to pivot the welders and fitters who make up its commercial shipyard workforce to military vessels, he said.

“It’s not that much of a jump or much of a retraining to go from building a container ship to building ... one of these Type 075 landing and helicopter ships,” Sadler said.

In a potential future conflict with China, the United States would be going up against the nation’s massive shipbuilding apparatus, he said. “You have to take it very seriously.”

Additionally, in a protracted war, Beijing would be able to sustain, repair and reconstitute its fleet because of its robust shipbuilding industry, he said.

The Chinese “shipbuilding industry has the wherewithal to keep their ships in the fight,” he said. “They also have the ability to reconstitute their fleet fairly quickly, too. So, if ships get sunk, they can put new ones out in the water fairly quickly.”

China’s shipbuilding capacity is impressive, Funaiole said. Even the COVID-19 crisis, which caused disruptions throughout the U.S. defense industrial base, seems to have had little effect on Chinese shipyards, he noted.

However, one big question still is how China will afford to maintain its rapidly growing fleet of advanced vessels, Funaiole said.

“That tends to be where costs add up when you have a large navy, given that you have to continue to service those vessels, and that can be very costly and time intensive,” he said. “That’s an area where the U.S. definitely has a considerable amount of experience and capability because we’ve been fielding a world-class Navy for a really long time.”

But operating an advanced navy is not just about having the latest vessels, it’s also about manpower. Whether or not China will have enough sailors and officers to operate its new fleet is still yet to be determined, Sadler said.

That’s the “question that gets kind of missed often in these discussions,” he said. “Can they man the ships at the speed at which they’re putting them into the water? I’m of a mixed opinion on that.”

Funaiole noted that while a country can accelerate its ability to produce naval vessels, it’s not as simple to create the workforce needed to operate them effectively.

A nation can build “a blue water navy and advanced technology … but it is really, really, really hard to accelerate the knowledge that could be passed down from generation of operator to generation of operator,” he said. “That’s the most significant advantage that the United States has compared to newer navies like China’s is that they’ve been doing these operations for a really long time ... in lots of different environments all across the globe. That kind of knowledge that could be imparted to the operators is huge and significant.”

Remember all the crap everyone expounded on so long and loudly about anybody anywhere could trounce a US amphibious attack, that area denial was so stout that a US fleet couldn't get within a thousand miles of "Bad Guy Land" without suffering unsustainable casualties...remember all that ? Well, guess what...that applies to the other guys as well. Imagine the Chinese trying to cross the Formosa Strait with an amphibious force and running into cruise missiles, aircraft launched weapons and heavy artillery from Taiwan's military...maybe even from the US forces (though I wouldn't count on that if I were Taiwan) ? Taiwan has fast attack missile boats...and submarines, sure the PLAN would do it's best to sweep the waters ahead of it's invasion fleet...but all the stealth attributes everyone whines about the PLAN diesel boats having....well the Taiwan boats are just as stealthy...so while it would be better if the Chinese never develop an true amphibious capability, it's not the end of the world if they do.

While one could suppose that the Chinese Communist Party is building up its Navy warships to protect existing Chinese interests and coastlines and to protect its commerce ships, one could also look back in history at the buildup of Imperial Japanese Naval assets prior to WW2. The Communist Party of China is interested in long-range, long-term power acquisition, and have clearly stated their desire to annex Taiwan. Amphibious platforms have only one purpose: to put troops and equipment onto hostile shores. Australia? Vietnam? Indonesia? California? are possible target shores, but Taiwan is specifically named for annexation. Meanwhile, the US Navy is being ordered to subtract shipbuilding options from its budget. We entered WW2 with troops training with wooden broomsticks because we did not have real guns or vehicles. Will we ever learn? Now is the time to rebuild and reconstitute our shipyards, train workers, and encourage novel engineering and tactical concepts in weapons and ship design--before it is too late.

I believe history will show that the US Marine Corps has been reduced as an effective fighting force. The Marine Corps has already got rid of all its tanks. It is reducing cannon artillery from twenty-one to five active batteries, eliminating three infantry battalions, and reducing those remaining by a third in manpower, and reducing air power and other combat support. The present-day Marine Corps is just a shadow of them self when I served in 1969.

These will be used to invade and secure Taiwan.

Now that the USMC has divested in M1A1 tanks and M777 artillery, China's Marines seem to have a wider range of Expeditionary armor and IFVs to make a formidable Marine landing force. But the analysts is correct that it takes experience on land and sea to master amphibious operations and all ships are vulnerable to sea mines, subs, and Anti-ship missiles.