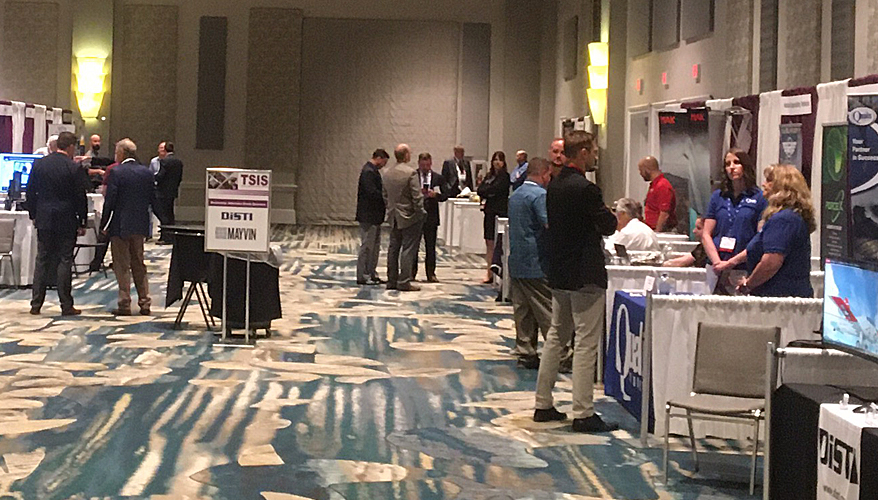 ORLANDO — One of the first domestic in-person defense industry conferences since the COVID-19 pandemic began last year has attracted more than 800 attendees this week.

The conference brought in approximately 800 participants who attended in-person, and 250 who attended online, according to Robb.

“So far, we are almost at 1,000 [participants], Robb said during a keynote speech at the conference. “That will be the largest number ever for TSIS, both for online and in-person.”

The conference provides industry an opportunity to display new training and simulation products and network with procurement officials from the Army, Marine Corps, Navy, and Air Force, according to NTSA.

NTSA is using the hybrid online and in-person blend of TSIS as an experiment to see if the offering is viable to be included during its annual Interservice/Industry Training, Simulation and Education Conference, which will be in late November this year.

“The in-person turnout at TSIS has been very impressive which indicates that attendees welcome the networking and social aspects of the event,” Robb said.

Attendees were excited to return to the conference circuit in person.

Mark Steele, the vice president of sales and marketing at Creating Technology Solutions, said in normal times he attends conferences a few times a year. Virtual conferences were just not cutting it for building relationships with customers, he said.

“To me, [attending virtual conferences] is no different than texting somebody, sending you an email,” he said. “You can ignore that, but you can’t ignore a one-on-one personal conversation with people.”

This is the first conference he has been to for more than a year, he said. Attendees seemed energetic and upbeat at the prospect of seeing each other’s faces for the first time in a while.

Being in person helped on the consumer-side as well. Shannon Craig, a senior software engineer manning a booth for MAK Technologies, said while vendors could talk about their products at the virtual shows hosted over the past year, it was harder to demonstrate the tech.

“We see a lot of people around here are actually letting people use headsets and touch equipment so that's a big plus,” he said.

Samuel Halverson, a principal systems modeling simulation engineer at Northrop Grumman, said it was worth traveling from Minnesota to attend the conference in person because he missed the networking possibilities at an in person conference.

Starting a random conversation is easier to do when looking at the same exhibit or standing nearby, he said.

“It's easy for people to get comfortable on Zoom and not really reach out as much,” he said. “You don't have the same opportunities to bump into people.”

Halverson added that he felt wearing a mask put more people at ease, expanding opportunities for networking. The conference also offered ribbons for attendees to wear to either display their vaccination status or to let others know if they preferred others keep their distance.