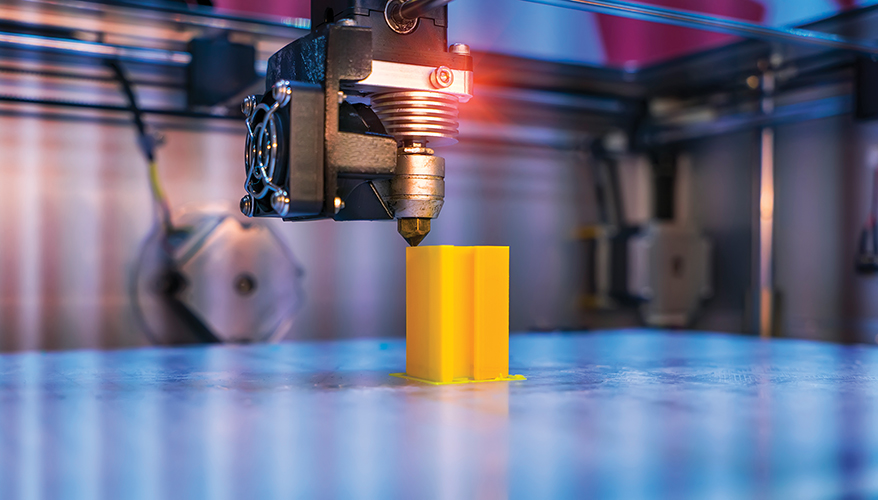 On Aug. 16, 2012, some 150 leaders of industry, academia and government gathered in Youngstown, Ohio, to mark an historic occasion — the launch of the national additive manufacturing innovation institute, now called “America Makes,” focused on accelerating innovations in 3D printing.

Then-President Barack Obama heralded the new institute, saying it would “help make sure that the manufacturing jobs of tomorrow take root not in places like China or India, but right here in the United States of America. That’s how we’ll put more people back to work and build an economy that lasts.”

While critical to America’s future competitiveness, innovation remains only part of the benefit this manufacturing process has demonstrated over the last decade.

We believe it serves as a major economic force as well, aligned with Obama’s assertion of contributing to a lasting economy as well as President Joe Biden’s commitment for America to “Build Back Better.” In particular, metal additive manufacturing — often referred to as 3D printing — is now poised to bring back tens of thousands of American manufacturing jobs and drive wholesale change to U.S. supply chains in just a few years if new financial, educational and defense measures can be comprehensively pursued.

To discern necessary policy changes, it’s important to review the technology’s impact and evolution. Since the late 1980s, metal additive manufacturing has been mostly used for tooling and concept modeling in automotive, medical and aerospace industries. But in the 2010s, work in corporate research-and-development labs and federal agencies drove breakthrough applications of the technologies, and by 2015 GE Aviation had gained Federal Aviation Administration certification for the first additively manufactured production part.

Employing new manufacturing technology, engineers dreamt up part-geometries with complexity only buildable by additive manufacturing. These designs were then transmitted to 3D printers full of metal powder. The printers’ lasers heated and melted particles together in thin layers, gradually forming structures never before built. 3D printing is now used in lieu of wasteful “subtractive” machining that chips away at blocks to produce shapes, or “formative” manufacturing — time- and cost-consuming processes that stress parts into particular forms to service a national industrial base. That had been viewed as only a goal, but is now a reality.

The Fraunhofer Institute in Germany further reports in a recent study that metal fabrication of titanium parts using laser powder-bed additive emits approximately 70 percent less carbon dioxide than equivalent production by traditional milling processes. This finding is further reinforced by the Additive Manufacturer Green Trade Association that highlighted additive-enabled design saved “so much fuel during flight lifetimes that they were a net environmental benefit” over conventional counterparts.

Today, manufacturers in a variety of industries have moved the technology from its prior limited role in producing prototyping and tooling, to the central role in manufacturing products at an industrial scale. Medical device companies 3D print porous titanium orthopedic implants capable of stimulating bone growth. The Air Force is 3D printing metal replacement parts on-demand — instead of relying on costly warehouses or 18-month requisitions of hard-to-source and/or obsolete parts — and is projecting to save billions of taxpayer dollars.

Aircraft producers use additive technology to enhance jet engine performance. For example, GE 3D prints highly efficient fuel nozzles for commercial engines — a part that is 25 percent lighter, and five times more durable. But it is the nozzles’ design that is particularly illustrative of 3D printing’s economic impact. Because of its 3D printed shape, it eliminated the need to assemble 20 individual components — many produced by outside and overseas vendors. Since the nozzle was to be built in a single print, the 30 percent in cost savings was passed on to re-invest in other innovations; furthering the effect, GE re-designed helicopter engine parts usually built from 300 parts to 3D print just seven assemblies.

As the Economist Intelligence Unit stated, non-additive “tooling and retooling can swallow up to 93.5 percent of traditional manufacturing costs,” but 3D printing often removes much of their use.

Replacing this critical production process value with additive not only yields substantial operational cost-savings, but also reduces speed of bringing products to market. Skipping 18 months of tooling allows companies to accelerate transition of novel designs, reducing risks of innovation and invention, as well and focus on the workforce training skills needed for the next generation of U.S. manufacturing. A recent project on an Air Force F110 additive manufactured sump cover spare part recently demonstrated the path to production without casting and machining tooling.

The nature of additive technology allows for ready and inexpensive innovation in the entire ecosystem, which feeds a continuous, virtual circle of technology development and productivity.

Newer machine modalities like binder jet hold the potential for radical improvements in cost and speed to high-production industries.

Continual improvements in software will cut down the time to qualify parts. Advances in powder handling will make the metal printing safer for workers. In short, low barriers to entry will allow for the rapid and decentralized development of new technologies and capabilities.

Through robust and visionary public-private partnerships between companies and government agencies such as the Defense Department, the base technology has demonstrated the advantages of additive manufacturing.

A majority of U.S. manufacturing occurs among suppliers to the large final assembly companies. These suppliers are typically small suppliers, unable to afford capital equipment ranging from $700,000 to $1 million each. Aside from the challenges associated with additive manufacturing skills shortages, the domestic manufacturing economy is limited in its ability to recapitalize new technology and leverage this proven technology to improve the workforce and overall supply chains.

These challenges are only compounded by decreasing margins afforded to part suppliers and ever-limited credit markets available to make loans to small- and medium-sized manufacturers for machine acquisition.

According to the Harvard Business Review, even before COVID-19, small businesses were continually facing dual challenges of banks’ reluctance to offer credit and prime contractors delaying payment. These challenges are resulting in cash shortages for upfront purchases manufacturers require to transition to acquire additive systems.

To overcome these challenges, the government should consider new fiscal policies such as targeted tax credits for advanced manufacturing technology, subsidized manufacturing equipment bank loans, and government enabled capital expenditures to make advances in critical national security-related manufacturing, including hypersonics and space launch vehicles, through such authorities as the Defense Production Act.

The government should present potential remedies to leverage the historic investments across the U.S. industrial base. The Chinese and Europeans both envision additive manufacturing as a key component of their industrial policies. The United States cannot afford to fall behind.

This is an area ripe for continued public-private partnership — with companies offering expanded apprenticeships, and robust investments made in key federal programs, ranging from the Department of Commerce’s Manufacturing Extension Partnership to the National Science Foundation’s Advanced Technological Education program, which helps community and technical colleges upgrade and modernize equipment and curricula for specific production sectors.

Challenges associated with access to credit and “skills gaps” were not caused by COVID-19. But the resulting economic crisis exacerbated these shortfalls. Now, policymakers need to explore every tool in the economic toolkit to revitalize manufacturing. This most certainly includes 3D printers and the training of the labor force to take full advantage of this incredible national capability.

David Handler is general counsel at GE Additive and Brett B. Lambert is managing director of the Densmore Group LLC and former deputy assistant secretary of defense for manufacturing and industrial base policy.