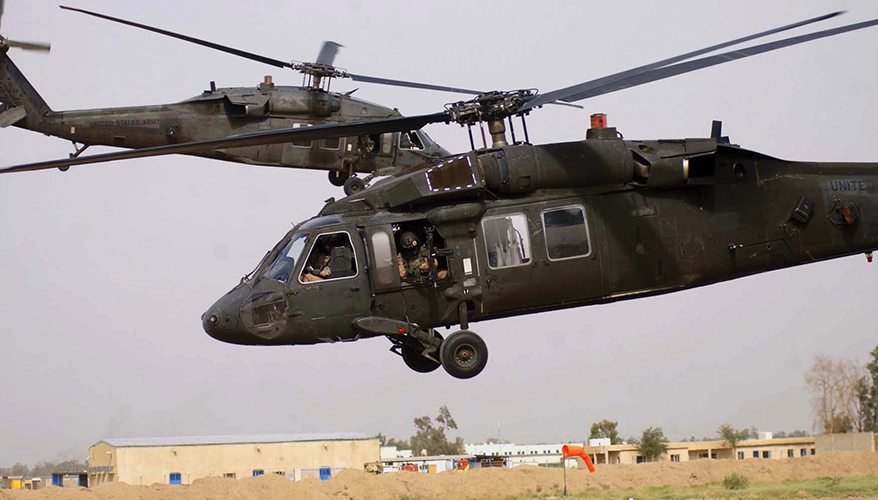 The military rotorcraft industry is rebounding after being clobbered by the COVID-19 pandemic, but more hurdles could be on the horizon, experts say.

Many helicopter makers — which often have both military and commercial contracts — were buoyed during the early days of the pandemic as work continued to flow from the Pentagon. While many have weathered the storm, analysts are cautioning that delays to major rotorcraft programs such as future vertical lift could have disastrous effects on the industry.

Even before the pandemic hit last year, the industry was already reeling from the effects of the 2011 Budget Control Act, which resulted in approximately 185,000 jobs being lost between 2010 and 2016 in the defense aerospace sector, according to a 2020 Center for Strategic and International Studies report, “Assessing the Industrial Base Implications of the Army’s Future Vertical Lift Plans.”

Ray Jaworowski, an analyst at Forecast International, a Newtown, Connecticut-based market consulting firm, said 2020 was a difficult year for the rotorcraft market. On the civil side, production was down about 19 percent compared to 2019. For the military side, the decline was about 16 percent.

Many of the issues were caused by supply problems resulting in companies being unable to acquire long-lead materials, he said.

But the Army’s ambitious plans for a new family of rotorcraft systems — known as future vertical lift — have been a shot in the arm for the industry. It is currently pursuing two major efforts: the Future Attack Reconnaissance Aircraft, or FARA, and the Future Long-Range Assault Aircraft, or FLRAA. Last year, the service awarded other transaction authority agreements to a Sikorsky-Boeing team and Bell for the FLRAA effort, and Bell and Sikorsky for FARA.

Head of program executive office for Army aviation, Brig. Gen. Robert Barrie, Jr., said the health of both the rotorcraft industry and defense industrial base writ large is still being assessed.

“We will acknowledge that we are not firing on all cylinders right now,” he told National Defense in an exclusive interview. “There are lagging indicators that [show] we have challenges and it’s primarily inefficiency.”

At the top tier of the rotorcraft industry, prime contractors that focus on defense are maintaining a fair amount of health, Barrie said. However, companies with dual military and commercial revenue streams have been hit harder.

“Commercial industry has been challenged because of COVID where companies had relied on that for a portion of their revenue stream,” he said. “They are more challenged than, say, an industry partner who has been primarily defense oriented.”

As has been seen across the defense industrial base, second- and third-tier suppliers who had a part of their business focus on commercial contracts are being disrupted, he said. Some of these companies did not have enough cash on hand at the start of the pandemic.

“COVID has certainly been a litmus test for the health of that supply base,” he said. “If someone had challenges with their cash, that very rapidly came to light. … They’re the ones that we were primarily concerned about and will continue to be concerned about as we go forward.”

The Army is continuing to work to understand the challenges faced by industry by speaking directly with companies and working with prime contractors that are engaging the lower tiers of the industrial base they work with, he said. However, “we don’t fully yet have our arms around what those impacts are going to be,” he said.

The program office is tracking potential delays to its aviation programs, but Barrie noted that those may not manifest until a later time.

“It’s still coming to roost,” he said. “What you’ve seen is in a lot of cases, the supply that’s on hand, ... [the] things on the shelves in our production lines has a certain amount of stock, and so I think what we’ll see in the continuing lagging fashion is that that will begin to catch up with the product where there are issues and where we’re not able to find alternatives.”

Instead of seeing direct delays, the challenge the office is seeing so far is general inefficiency, Barrie noted. However, that’s a difficult thing to quantify, he added.

“We would all acknowledge that things aren’t as efficient as they perhaps were before COVID,” he said. “Yet if I asked you to quantify it for me and tell me exactly how efficient we’re being, that’s a very challenging thing to do. …We don’t have a direct correlation. There’s not a, ‘Hey, we are X percent less efficient.’”

The Army has been working to support industry by opening communication lines with companies to ensure acquisition strategies and procurement plans are clearly understood to help with resourcing, Barrie said.

The service is also working to obligate funds quickly to companies for ongoing work, he said. “We’ve [been] working with our contracting partners, making sure that when a contractor bills us for work that they’ve done, that we are rapidly dispersing those dollars out to our contractors to make sure that if they do have ... an invoice into the government for a revenue that we’re able to pay that in a timely fashion,” he said.

That’s a practice the program office has always endeavored to do, but with companies juggling debt from COVID-related expenses it is doubling down, Barrie added.

Jaworowski in the short term said he expected production in the military rotorcraft market to gain ground “fairly strongly” in 2021 and 2022 as supply issues are resolved.

By 2022, he expects the number of platforms built to be on par with what was produced in 2019.

However, there are longer-term issues that may stifle growth as the decade continues, he noted.

That includes declining or flat military budgets, which will be a top concern for industry.

“In real terms, fiscal ’21 was down a little bit and we don’t know what the next budget request is going to look like,” he said. “It does seem that some cuts may yet be coming, so it looks like the peak was probably fiscal ’20.”

Meanwhile, as the 2020s continue, the military rotorcraft market will see legacy programs — such as the UH-60 Black Hawk, AH-64 Apache and the V-22 Osprey — start to wind down, he said.

“The services are well on their way to completing those programs and by 2030, many of those will have ended or be very close to being ended,” he said. “Now that’s not to say production of those models will cease at that point — you will have production for export, of course — but because U.S. procurement will be at, or near the end, the annual build rates will be lower than when the U.S. programs of record were really in full swing.”

Jaworowski noted that the CH-47F Block II Chinook program may be an outlier.

“There seems to be considerable support in Congress to reviving that program. … We do expect it to be revived at some point,” he said. The fiscal year 2022 presidential budget request will likely provide more clarity, he added.

After 2022, production in the military rotorcraft market will gradually decline for a time, Jaworowski predicted. Like the United States, many countries’ replacement cycles for their helicopter fleets are coming to an end, although there will still be some export opportunities in regions such as the Asia-Pacific and the Middle East, he added.

However, efforts such as future vertical lift in the late 2020s and early 2030s will be a big boost to the market, he noted.

The V-22 Osprey tiltrotor aircraft is the only all-new rotorcraft that the United States has procured in decades, he noted. The service tried to build an armed reconnaissance aircraft known as the RAH-66 Comanche but that project was canceled before it went into production.

“There was a concern for a while there of a lack of innovation in the U.S. industrial base,” he said.

The Army National Guard’s UH-72A Lakota was based on the Eurocopter EC145, which is now part of the Airbus Group Inc. The service has procured 400 of the European-designed aircraft over the past decade.

“European manufacturers kind of stole the march a little bit back then in terms of product innovation, because they put out new models whereas the U.S. manufacturers were quite understandably simply responding to what the Pentagon was asking for, which was simply a newer version of what was already in their fleet,” Jaworowski said.

Future vertical lift has injected much needed product innovation into the industry, he said.

While the pandemic has caused a few months delay to the initiative, it is unlikely to cause any serious issues, said Rhys McCormick, a fellow at the Center for Strategic and International Studies’ Defense-Industrial Initiatives Group and co-author of the center’s report on the helicopter industry.

However, a longer delay could spell trouble.

“A few months delay will not end the industrial base, but if they’re starting to talk about pushing programs back a year or two years, that’s when you start running into some of the more serious issues about how the transition is going to happen between the legacy programs and the next-gen programs,” he said.

Right now, the Army is in a pre-decisional stage when it comes to future vertical lift, he said. But as it grows closer to reaching a decision, that’s when delays become more significant.

We've seen this movie before. The Biden 2021 Budget will ultimately cut Defense by 10% or roughly 80B. If true, there is no way the Army will want or be able to afford advancing two parallel aviation programs into advanced development, testing and production simultaneously. LHX (Comanche) and JVX (Osprey), two programs whose early development was paid for by the Army in the 70s, are prime examples. JVX, now Osprey, had to be transferred to the Navy/USMC, while the Army retained LHX. The Army better make a quick choice of which it wants, and push. and push, and push for it.