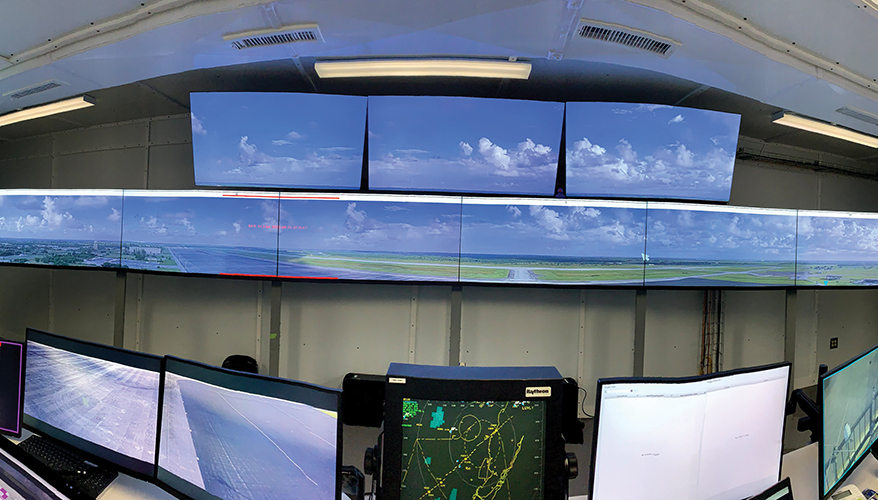 A military airbase in Florida is testing a remote digital tower that allows air traffic control to take place hundreds, or even thousands of miles, away from runways.

A systems operational verification test took place at Homestead Air Reserve Base over the course of one week in late 2020. Testing was done using real-world scenarios and the airbase’s daily operations. An early operational assessment began in late 2020 and will be completed mid-2021, said Jay Balakirsky, Frequentis USA vice president of business development and sales.

In this phase, operators will actively control aircraft using the system. The airfield’s tower will serve as a backup, he explained.

“Remote Digital Tower has the ability to support contingency operations, improve the situational awareness of air traffic controllers, and facilitate the control of several airfields from a central location,” he said in an email.

Vienna, Austria-based Frequentis AG has been selling the technology to public sector aviation agencies in regions such as Scandinavia, where some airfields are infrequently used, and operating them remotely makes economic sense. For militaries, the system can be set up rapidly and can keep air traffic controllers out of harm’s way, Balakirsky said.

“This brings great benefit to the warfighter in today’s complex environments,” he added.

The system includes augmentation features such as data tags, bounding boxes and visual overlays. It is also the first time that a remote digital tower has been integrated with the Standard Terminal Automation Replacement System allowing controllers to see pertinent radar display data overlaid on the panoramic out-the-window view, the company said in a statement.

Naval Information Warfare Center Atlantic — with the support of the Air Force, Navy and Marine Corps — is sponsoring the test under an other transaction authority agreement. The company has a history with the Navy as it has supported air traffic control for aircraft carriers and landing helicopter dock ships over the last seven years.

Once the latest assessment is complete, the agreement calls for Frequentis to move to another Air Force base where a mobile solution will be demonstrated and tested, Balakirsky said.