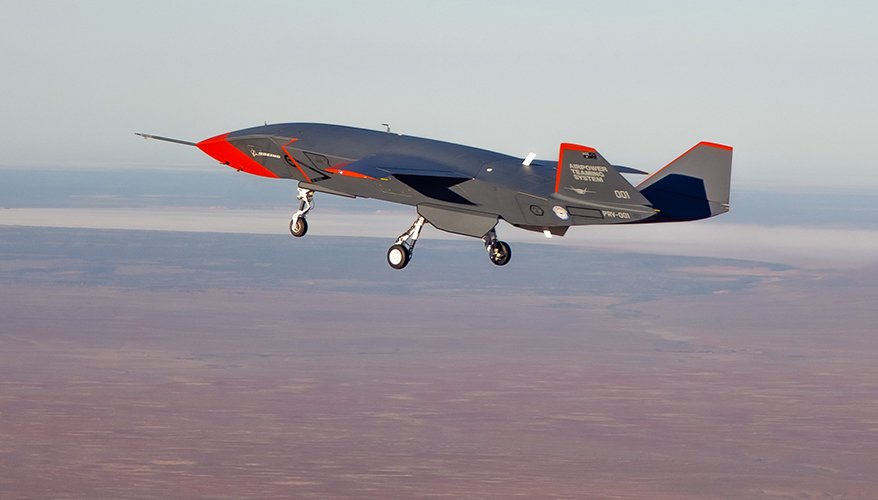 Boeing Australia and the Royal Australian Air Force on Feb. 27 successfully completed the first test flight of the Loyal Wingman unmanned aircraft exactly two years after revealing the program to the public.

The Loyal Wingman platform flew under the supervision of a Boeing test pilot monitoring the aircraft from a ground control station at the Woomera Range Complex.

Boeing Australia unveiled a mockup of the robotic jet exactly two years ago at Avalon – The Australian Airshow outside of Melbourne. The company had been working on the program in secret for about a year. It is the first military aircraft to be designed and manufactured in Australia in more than 50 years.

“The Loyal Wingman’s first flight is a major step in this long-term, significant project for the Air Force and Boeing Australia, and we’re thrilled to be a part of the successful test,” Air Vice-Marshal Cath Roberts, RAAF head of Air Force capability, said in a statement.

The loyal wingman concept calls for low-cost, expendable robotic jets to fly along with piloted aircraft and serve various functions such as sensor platforms, weapons carriers or decoys. Multiplying the number of aircraft in a formation gives opponents multiple “dilemmas,” the concept’s proponents say.

“As we look across our global customers, they're all listening and they're all extremely interested in and benefiting from the advancements that … the team are bringing to bear in Australia,” Boeing’s Senior Director of Autonomous Aviation and Technology Jerad Hayes, told reporters in a briefing March 2.

Following a series of taxi tests validating ground handling, navigation and control, and pilot interface, the aircraft completed a successful takeoff under its own power before flying a pre-determined route at different speeds and altitudes to verify flight functionality and demonstrate the performance of the airpower teaming system design, according to a press release.

After the test, the RAAF announced that it would invest a further 115 million Australian dollars over the course of three years in the program, which would go toward three more test vehicles making a total of six aircraft. The second aircraft recently came off the manufacturing line and the others are in various stages of development, said Airpower Teaming program director Shane Arnott.

The program is supported by 35 Australian industry teams and is using new engineering processes such as digital twins to digitally flight-test missions, the statement said.

This first Loyal Wingman aircraft is serving as the foundation for the Boeing Airpower Teaming System being developed for various global defense customers.

That includes the U.S. Air Force’s Skyborg robotic wingman program, in which Boeing is participating. Technologies being developed in Australia are being transferred to the aircraft being developed in the United States for that program, the executives said.

The aircraft will fly alongside other platforms using artificial intelligence to team with existing crewed and unmanned assets to complement mission capabilities. Teaming flights are scheduled for later this year, the statement said.

“While I'm not going to quote specific numbers for the business case, it is a very significant outlook,” he said.

”Our adversaries are not resting on their laurels. They are moving technology forward at an ever increasing pace. … How do we not just match that pace, but leapfrog that pace of technology development and integration to provide that operational capability?” he asked.

Noting that loyal wingman concepts call for low-cost aircraft that are attritable, Arnott said engineering in affordability is one of the major challenges of the program. It is approaching the problem by using digital engineering, advanced manufacturing technique — including robotics to reduce labor costs — and by using a commercially available off-the-shelf engine.

“For this particular concept to work, it needs to be at a cost point that the customer is willing to lose the aircraft because there's no scenario in the future fight where there isn't attrition in the airspace,” Arnott said.

JUST IN: Militaries Behind in Applying AI to Training, Simulations