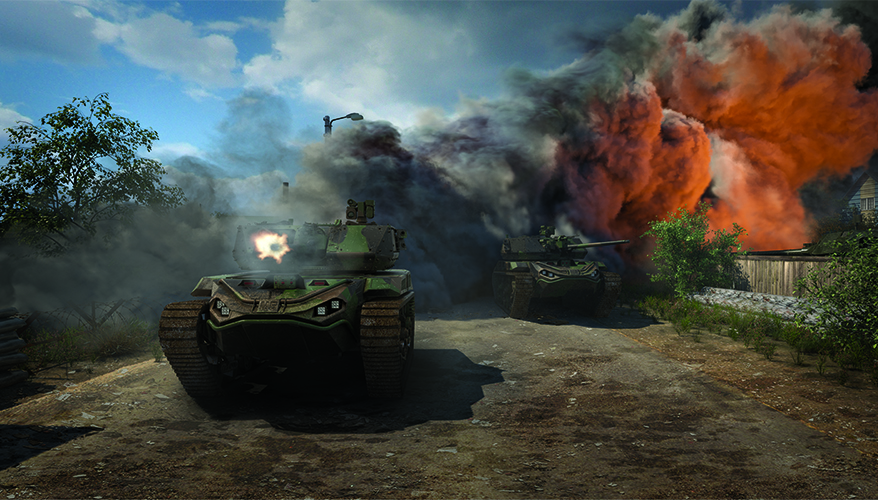 A future military conflict between the United States and China has traditionally been viewed as primarily an air and naval fight that would most likely occur in the Asia-Pacific. But the Army leader in charge of modernization said his service needs next-generation combat vehicles and other technologies to deter and, if necessary, win a potential ground war with Chinese forces.

“They're aggressively expanding their influence,” he said. “They have publicly been very clear about not only their modernization objectives, but also their regional and technological dominance objectives.”

Years ago during the Obama administration — which tried to “pivot” the U.S. national security community’s focus to the Asia-Pacific — the Air Force and Navy came up with an Air-Sea Battle concept to overcome enemy anti-access/area denial capabilities such as the arsenal of advanced air defenses and anti-ship missiles possessed by Beijing. Since then, a major role has been envisioned for the Army in a potential U.S.-China war in the region.

The service’s Multi-Domain Operations concept includes using new long-range capabilities such as land-based hypersonic missiles and anti-ship weapons to destroy enemy air defenses and other anti-access systems to enable air and maritime maneuver for U.S. naval and air forces. Although the Multi-Domain Operations concept could be applied to other regions, it is often discussed in the context of a potential shootout in the Asia-Pacific.

However, the No. 2 priority is next-generation combat vehicles. The service is pursuing a new Optionally Manned Fighting Vehicle, a family of robotic combat vehicles, and a new light tank known as Mobile Protected Firepower.

During the Global Force Next conference, Murray was asked what role such systems could play in a potential conflict with China in the Indo-Pacific region, where a land war between great power competitors is not viewed by most Pentagon planners as one of the more likely scenarios.

“If competition, which we're in today, ever went to conflict … I think we look at that fight very, very narrowly,” he said. “We always talk about Taiwan and we always talk about the South China Sea” as geopolitical hotspots where events could lead to a U.S.-China clash.

However, Beijing has a large army, he noted.

“I look at the ability for that conflict, if it ever happened, to become more global and less regional,” he said. “I also believe that the Chinese would use every asset they have in their arsenal, which includes a very large mechanized force. And so I look at, you know, the [U.S. military’s] ability to deter. I look at the assets that China has in place currently [and] their modernization path. I look at ... less of a regional fight and more of a global fight if it came to that. And I just think that we fool ourselves if we look at this too narrowly.”

Murray did not identify the other regions of the world where he could envision a land war breaking out between U.S. and Chinese ground forces.

Re: Army Leader Warns About Potential Land War with China

Greg Kosmala is dead right. Strangle the funds. The financial cost of an immediate worldwide withdrawal from cheap labour and goods is but a drop in the ocean when compared to that of a cyber or hot war, or both. Let it all be done with, never again will we fund such ideals.

Aussie at 4:47 PM
Re: Army Leader Warns About Potential Land War with China

Exactly where does General Murray believe such a land war will first take place? That matters greatly! When you said that the, "Chinese would use every asset they have in their arsenal..." you failed to address the nuclear option. I don't see the Chinese giving up or surrendering, they have waited too long to take our place on the global stage. Politically the world needs to start withdrawing ourselves from the addiction to cheap labor. Globally we need to stop supporting companies like Apple, Walmart, Nike and Tesla that continue use cheap labor to pad their profits. It is not worth it, and all that these companies are doing is digging the future graves of brave men and women that will be fighting this war on our behalf. China needs a robust economy in order to control their people and the world should stop supporting them. If we do that, then the revolution and change that we need will begin from within.

greg kosmala at 9:05 AM
Re: Army Leader Warns About Potential Land War with China

Hi tech weaponry would be useless after an EMP.

Jim at 11:16 AM
Re: Army Leader Warns About Potential Land War with China

I found the General's remarks (unfortunately) vague and not given enough time. He should have had an hour. In a land war with China, the PLA will "layer" their battle with ranged weapons from close-in to LRPFs. What happens if the PLA unleashes volleys of ATGMs, UAVs, artillery, and LRPFs that craters the landscape like the Moon---"BIG BAD BOOMS?" Then, the US Army's approach of using tracked vehicles will be moot if there are massive craters everywhere. And the US Army didn't seem to support the US Marines, and just brushed them aside. The USA may have precision weapons, but the PLA has lots of precision AND inaccurate weapons with massive explosive yields. That is how they fight. PLA can bombard and change the landscape and not even bother to hit anything. That is one weakness of the DoD in that DoD HAS TO HIT something. Afghanistan proved this with massive volleys of fire into the FOBs. The soldiers lacked the firepower and range to often hit back---many FOBs were a mess like Camp Outpost Keating. Would new Army FVL ATGM helicopters be better? Would new drone swarms be better? Would blimps overhead for AMD and BMD be better? Would gliders be better? Would LAPES tanks be better? The concepts of innovation seem that the US Army wants to replace their Legacy AFVs, something that they have been trying to do for decades. The M5 RIPSAW concept (graphic here) is novel, but recall, M5 RIPSAW was NOT a RFP! It was an innovative design from Howe Tech Brothers who PITCHED the M5 RIPSAW to the Army and the Army wasn't really interested until the RCV Program. The US Army didn't ASK for RIPSAW to be made! Perhaps that is the way that the US Army should tackle A2/AD---ask Industry for countering A2/AD ideas. Again, General Murray should have been given a hour and not half-an-hour to speak.

Krashnovians at 10:12 AM
Re: Army Leader Warns About Potential Land War with China

The U.S. must not wait to confront China in the South China Sea or elsewhere. We must prepare our military to win. Hardware no matter how advanced, is not enough. We must have the will to prevail. China has a blue water Navy, it also has and continue to modernize its military while we continue to be divided and distracted at home. While China continue to build militarized reefs in the South China Sea, we must start building up our military capabilities in the South China Sea. We must let the Chinese know that there is no possibility of them winning any confrontation against the U.S. Today they believe they can prevail given our distraction here at home. A robust U.S. military includes expanding our technological military know how. We must offer incentives for the best and the brightest to enlist in our military. We have war fighting experience. We have very capable military leaders and personnel to fight and win if necessary. We must make it clear to the Chinese, any move to take Taiwan by force, would be a serious mistake in judgement and that we would use all the tools available to us to insure they wouldn't succeed.