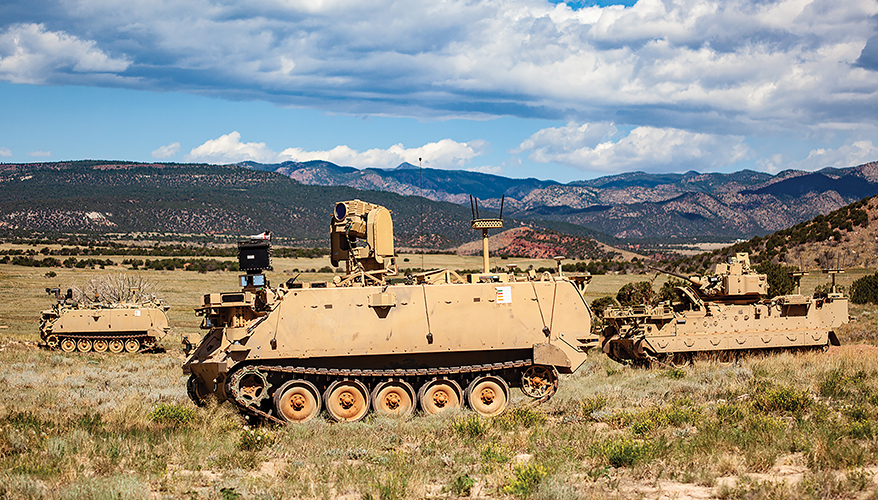 The Army is bolstering the lethality of its fleet of robots through the integration of new weapon systems and payloads that will allow the platforms to destroy targets, take down rogue drones and jam enemy communications.

The service is currently pursuing a new family of platforms known as the robotic combat vehicle which feature three variants including light, medium and heavy. It is working to equip them with special payloads to give them enhanced capabilities and offer commanders more options on the battlefield.

Last year the Army announced its intention to award other transaction authority agreements to QinetiQ North America and Textron Systems to build four light and four medium prototype RCVs, respectively. Meanwhile, the service has embarked on what it calls a “campaign of learning” as it works to develop the systems with the input of soldiers.

“Gaining their input early in the process informs our entire decision-making process,” Brig. Gen. Ross Coffman, director of Army Futures Command’s next-generation combat vehicle cross-functional team, said in a statement. “The more we can learn now, well in advance of any future building project, will ensure we have the right design, with the right technology that our soldiers and Marines need as a tool to win our nation’s future wars.”

The term “decisive lethality” refers to a spectrum of capabilities, Wallace said during the National Defense Industrial Association’s Joint Armaments, Robotics and Munitions Digital Experience conference in November. On one end of the spectrum, lethality is delivered by off-board systems.

“What that means is the RCV rapidly develops a common operating picture and then the commander delivers the effects through joint strikes, combined arms fire, a litany of different ways, but in plain speak that decisive lethality is being provided by something other than the robot,” he explained.

The light variant’s fundamental purpose is reconnaissance, so it will primarily lean on its robust sensor package, Wallace said. “The commander identifies the best weapon system to deliver the effects, and then that weapons system — not the robot — delivers decisive lethality,” he said.

On the other side of the spectrum is the RCV heavy.

“That vehicle brings everything it needs to the party,” he said. “The RCV heavy is a robotic tank. So just as an M1A1 — or M1A2 — can deliver decisive lethality via onboard means, so too can the RCV heavy.”

The medium variant which is considered a “bridging solution” between the light and the heavy, is meant to rapidly develop a common operating picture but will have a more robust capability onboard to employ firepower with its organic weapon systems, Wallace said.

For the light variant, its lethality package will have the capability to defeat troops and trucks with one anti-tank guided missile, Wallace said.

However, the service is being open-minded in how it defines the required weaponry.

The Army needs to “do some soul searching” and determine what that anti-tank guided missile, or ATGM, will look like because it must have commonality with the service’s existing supply chain, Wallace said.

“It’s going to be very, very difficult if the RCV uses one ATGM and the [optionally manned fighting vehicle] and everything else uses another,” he said. “We need to look at how do we define commonality across that spectrum. So really that’s an Army problem, and we’re going to wait for the senior leaders to solve it, to let us know what direction we need to go.”

For the medium variant, that platform will need to defeat systems such as amphibious tracked infantry fighting vehicles, armored reconnaissance vehicles and armored personnel carriers, Wallace said. The variant will have a requirement of two ATGMs, he added.

The heavy will be required to have the same lethality as a tank with the addition of two anti-tank guided missiles as well, he said.

The service is interested in equipping the systems with a commander’s independent weapon station, but the feasibility of doing so will depend on the size, weight and power requirements of each system, Wallace said.

The light variant does not have the SWaP necessary for the capability, so the Army is looking to the medium and heavy platforms, though even that may be a stretch for the medium, he said.

“One thing we’ve learned through our virtual experiments is that commander’s independent weapon station allows for a rapid servicing of targets in an urban environment,” he said. “It’s very difficult to slew a turret and react to a threat in a very congested area, but commander’s independent weapon station allows you to do so.”

However, it’s unclear if the RCV medium will be able to be equipped with the capability because of SWaP constraints, he noted. “It’s going to be very difficult to do.”

The Army also considered equipping the medium variant with a 50 mm weapon but that now seems infeasible given size constraints, Wallace said.

“After our engineers did some homework and we listened to industry — a lot of feedback from industry — the space requirements to accommodate a 50 mm basically turns an RCV medium into an RCV heavy,” he said.

The service now believes 30x173 mm ammunition is the best solution, he said.

“The ammo needs to be in the Army’s inventory because … we’re trying to look at second- and third-order effects of what is the logistics impact if we bring in some exquisite solution, like a 39 mm cannon that is only for the RCV,” he said. “That’s going to have some significant disruption to log channels and the more friction you have in log channels creates vulnerabilities.”

As the service looks to the future, both ballistic and non-kinetic solutions will be part of the equation, Wallace said.

“There is the ability to achieve a ballistic end state by affecting a threat with a direct fire weapon system, but I would submit given the hyperactive nature of the battlefield, that when we see effects, there’s also a portion that we’re not talking about that comes out of the end of a gun,” he said. “There’s cyber, there’s [electronic warfare] — not only being able to degrade a threat via a mechanical and chemical means, but being able to degrade a threat with respect to cyber and on the EW spectrum as well.”

Wallace noted that non-kinetic options may sometimes be more advantageous.

“One could argue, yes, you are very lethal if you make a turret off a tank explode and fly off, but you’re even more lethal if you paralyze that formation’s ability to communicate,” he said. “That’s what success looks like, being able to augment the ballistic capabilities with the cyber and the EW spectrum as well.”

Modularity will be a key component for the robotic systems, Wallace noted.

“That is absolutely paramount,” he said. The Army and industry need to look at how to provide enough size, weight and power to enable rapid “plug-and-play” capabilities, he noted.

The Army plans to be flexible with industry. “We’re going to throw addendums into the requirements where we don’t want to just say, ‘Everything is modular. Be able to change every payload in 30 minutes or less,’” Wallace said. For some payloads, the service knows that process could take hours.

“We [will] provide that time and space because we understand four soldiers working with a … flashlight in the middle of the night are not going to be able to pull off a 30 mm turret,” he said. That’s a job that needs to be done at a specialized facility.

The Army is looking for new payloads that can provide a wide range of effects including countering unmanned aerial vehicles or deploying smoke for obscuration, Wallace said.

“There’s a whole bunch of other payloads that we have not even thought about yet,” he said. “We’re definitely open to new approaches.”

However, Wallace noted that integrating new payloads into the robotic systems does pose challenges.

For example, with counter-UAS payloads, the Army knows that new threat data will constantly have to be uploaded into the software that runs the system, he said.

Therefore, “how are we facilitating a rapid reception of new software, new updates coming to these payloads and integrating it into the systems?” he said.

The only payload that will not be modular and will be featured on the base models of the robotic combat vehicles will be a chemical, biological, radiological and nuclear detection system, Wallace said.

“CBRN detection is a valid use case in every single thing the RCV is going to do,” he said.

Wallace noted that legacy systems such as the joint chemical agent detector are being phased out and replaced with some “really cool, gee whiz stuff.”

Robert Kania, division chief for combat robotics and teaming at the Ground Vehicle Systems Center, said his organization is working closely on the robotic combat vehicle effort. The Army has already held a number of soldier operational experiments where users tested the systems.

During the second event, which was held over the summer, soldiers worked to directly tele-operate the vehicles.

“We did very little in the realm of what I would call the more traditional autonomy with routes and sending the robot off on its own. It was almost always controlled through ... cameras and through direct control,” he said. “This was the first time we really did a lot of joint maneuvering with multiple assets and weapons.”

Managing the demands of increased bandwidth on Army networks and communication systems has proved challenging, he noted.

The event reinforced the Army’s idea that RCVs will not operate as a standalone system but will provide new capabilities to an integrated fighting force, Wallace said in a statement.

During the event, soldiers employed a tethered drone, a counter-UAS jammer, a modular smoke obscuration model, a common remotely operated weapon system — which was equipped with an M240 machine gun and a Javelin anti-tank missile — as well as an autonomous drive function.

The service will use feedback gleaned from the event “to shape and inform potential force structures within the Infantry Brigade Combat Team during the ongoing RCV campaign of learning,” Coffman said. “Our knowledge of how we can utilize RCVs and what technologies and capabilities they need to possess continues to expand exponentially based on the inputs from our soldiers.”

Logically, this absolutely makes sense, up-arming the RCV Family. But is armament so "fixed" as to be predetermined already? Surely the RCV-Light will get CROWS-J or some RWS with COAX and .50cal and 40mm AGS being the main armament along with Javelin or SPIKE as COAX. The RCV-Medium will be 30mm cannon. And the RCV-Heavy will be 105mm or 120mm. The ATGM, technically, should be SPIKE since SPIKE flies farther and is lighter than Javelin and doesn't require thermal Command Unit cooling like Javelin. But that's all "Fixed" and predetermined armament and that lacks innovation for the problems of the future battlefield.

There should be more, though. RCV Family should field turrets and fittings such as APKWS rocket pods, distance flamethrowers (especially flame because China and Russia have flamethrowers), thermobarics, engineering, MICLICs, JQL/JAGM, SHORADS, twin or quad .50cals (like WW2), or a 7.62 to 25mm gatling gun with a huge ammo hopper. The US Army and USMC are not being innovative enough shoehorning themselves with these "fixed" turrets and armament options.

CITV and chassis cameras are a "given"---that shouldn't be a problem if implemented properly. The RCV Family can finally give the ground forces relatively light, mobile, compact, and good firepower that Light Infantry, Marines, and Airborne never enjoyed. The US Army needs to get this correct for the soldiers and Marines. Look at the armament options in this article---those are all LRPF guns from .50cal to 30mm to 105-120mm cannon---and no "area saturation," "area destruction," and "mass fire" that China and Russia have. RCVs can point-and-shoot and destroy pinpoint targets. But against waves of enemies, a gatling gun or a flamethrower might be better to deny ground and present a "wall of fire" compared to finding, fixing, and plinking targets (before getting hit and destroyed itself eventually).