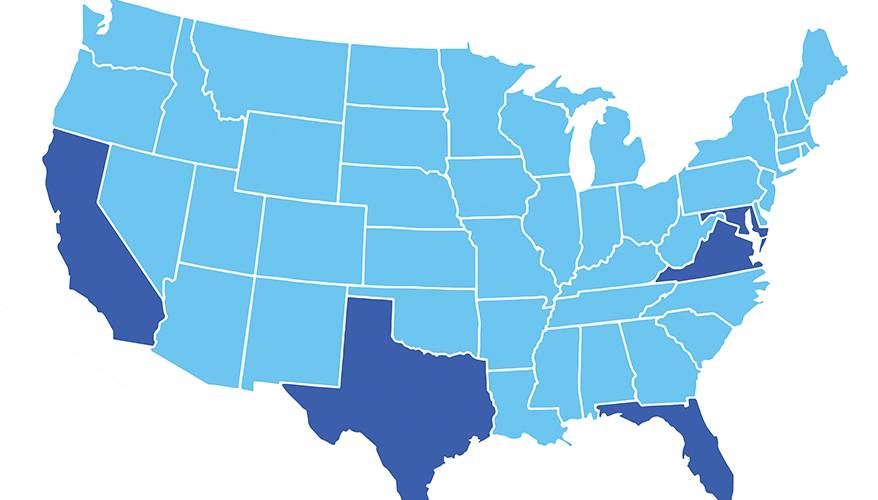 A huge portion of U.S. defense spending is going to contractors and military personnel based in just a handful of states, according to data recently released by the Pentagon.

Defense Department contract obligations and payroll spending in the 50 states and the District of Columbia totaled $550.9 billion in fiscal year 2019. Of those outlays, 73 percent was spent on contracts for products and services, while the remaining 27 percent paid the salaries of department personnel, according to the Office of Local Defense Community Cooperation’s latest report on defense spending by state.

“California, Virginia and Texas topped the list of recipients for overall defense spending,” said a press release accompanying the study. They received $181.3 billion, about one-third of the total allotted to all 50 states plus D.C.

The top five, which also included Florida and Maryland, received about 43 percent of the total, while the top 10 received approximately 59 percent, according to the data.

Patrick O’Brien, director of the Office of Local Defense Community Cooperation, said: “State and local officials need to use this information to better understand the essential continuum of investments across people, equipment, weapons systems, real estate and services required to maintain our national defense. Across these areas, they should determine if there are opportunities to further develop workforce skills, enhance and improve innovativeness and buying power, and partner to strengthen the resilience of our installations and industrial base.”

California has the most people and the biggest economy. Then Texas and Florida are close by. Virginia is smaller but closer to the Capital. Is it all supposed to be spread out equally among 50 states or on a per-capita basis?