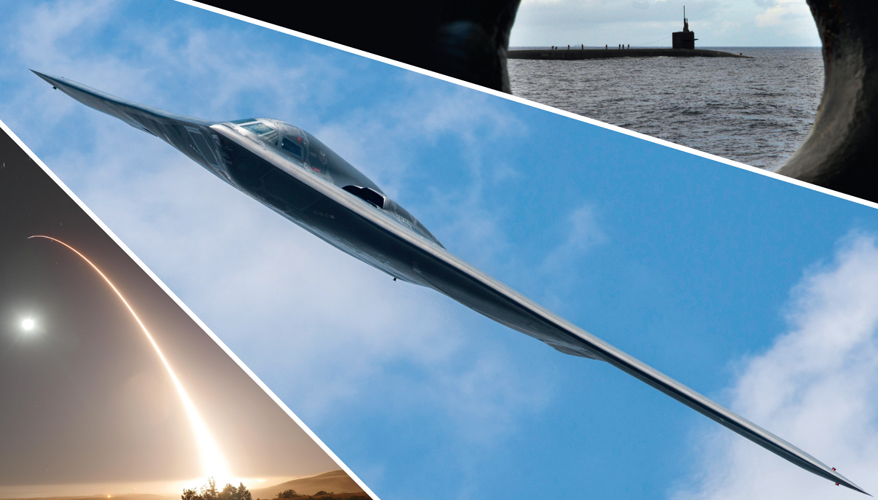 An unarmed Minuteman III intercontinental ballistic missile, a B-2 bomber and the Ohio-class submarine USS Tennessee

The Chairman of the Senate Armed Services Committee Sen. Jack Reed, D-R.I., said he supports maintaining current budget levels for the nuclear triad, but he expects the overall defense budget to flatten.

“We have to modernize the triad and maintain in my view the triad for strategic reasons that have been successful for about 70 years,” he said.

He noted the B-21 aircraft for the Air Force and Columbia-class boomers for the Navy specifically need to be monitored to stay within cost parameters. Both systems would replace aging weapon systems that are rapidly approaching their retirement dates, some time over the next decade or so.

The senator did not address calls from some members of his party to reduce or delay the ground-based strategic deterrent that will replace the Air Force's Minuteman III.

“But in every one of these areas, we can't avoid looking at cost and trying to minimize those costs,” Reed said.

Reed added that the defense budget will likely increase at a slower rate from the Trump administration years.

He would not prioritize considering cuts to the Air Force's F-35A joint strike fighter jet program, but that he would look at analyzing the high costs and reliability issues that have been a target of critics. The service plans on buying 1,763 aircraft.

“I think we have to make sure that we send the right signal, but also don't compromise the operations of the Air Force,” he said.

Congress also has to be wary of how cutting equipment would impact the defense industrial base, Reed noted. Final decisions will be made once the committee is able to weigh all these factors, he said.

Though Reed supports the push for modernization, he said there may be cuts to legacy weapons systems. Senators such as Bernie Sanders, I-Vt., have pushed for dramatic budget cuts, but the slim Democratic majority in the Senate means dramatic changes in either direction are likely off the table, Reed said.

Congress passed a more than $700 billion budget for defense for the 2021 fiscal year.  “We're going to deal with, I think, a much tighter budget going forward, more flat, then rising,” he said. “But within that, I think we have to make judicious calls about what is worthwhile.”

He acknowledged that individual senators often have vested interests in legacy systems, which make cuts challenging.

Functional cost savings could help the defense work within a tighter budget, he said, while mentioning privatizing military commissaries as one example of a way to save on expenses without touching investment for weapons. A majority Republican Senate defeated a proposal to pilot private commissaries in 2016 after a study was commissioned to assess the costs and benefits of the program in 2015.

Meanwhile, Reed addressed opposition from Sen. Jim Inhofe, R-Okla., to the nomination of Colin Kahl, Biden’s pick for the undersecretary of defense for policy.

A spokesperson for Inhofe told POLITICO that the senator has issues with some of Kahl’s policy positions. The news outlet reported Republican criticism of Kahl’s support of the deal with Iran, or the Joint Comprehensive Plan of Action.

Reed said he trusted the hearing process and hoped Kahl would have a chance to defend his positions and his experience during questioning next week, March 4. Kahl’s long-standing relationship with President Joe Biden would help the Defense Department build a strong relationship with the White House, Reed added.

“I think he'll get a fair shot at the hearing,” he said.

The senator added that the committee will “aggressively” pursue the 59 nominations slated for the Defense Department. The lack of a “real transition” to the Biden administration put the department at a disadvantage that needs to be corrected, Reed said.

“We've made the point that we need the nominees as quickly as possible ... particularly after the last several years of the Trump administration, with the department really in disarray, acting secretaries and people acting for acting secretary,” he said. “So we've got to get back to stability.”

Analysis: Only Massive Troop Cuts Can Save the Army From Budget Train Wreck