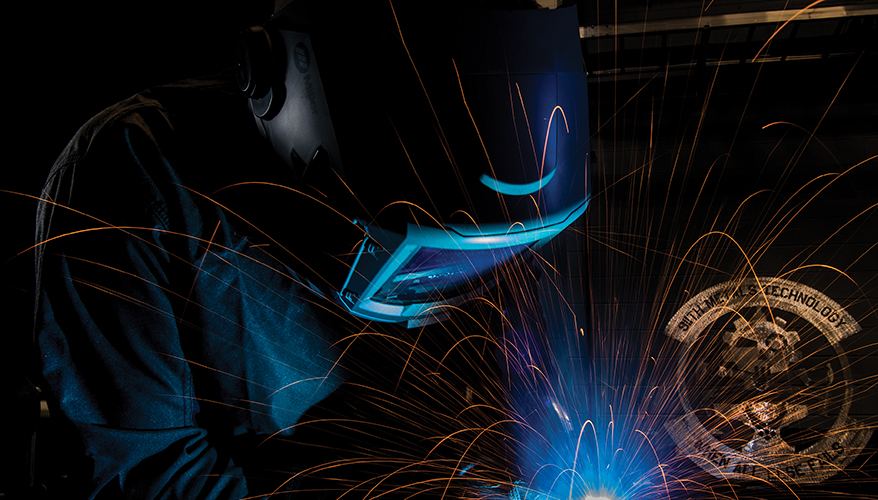 For the second year in a row, the defense industrial base is a on a negative trajectory and faces significant challenges including industrial security and supply chain problems, according to a new report released Feb. 2.

In the study “Vital Signs 2021: The Health and Readiness of the Defense Industrial Base,” researchers gave the industrial base a “C” grade. The overall score was 74, slightly lower than last year’s 75.

“While passing, the ‘C’ grade reflects a business environment that is characterized by contrasting areas of concern and confidence,” said the annual report, which was created by the National Defense Industrial Association and big data analytics firm Govini. “It also reflects the state in which the defense industrial base entered the novel coronavirus (COVID-19) pandemic, which dramatically disrupted the daily lives of every American as well as the flow of American and global commerce.”

The United States relies on a productive and vibrant industrial base, but it is currently facing a number of headwinds, said Hawk Carlisle, CEO of NDIA.

These include ongoing industrial security threats, highlighted by the recent SolarWinds attack which has been attributed to Russia and intellectual property theft from China and others, he noted during an online discussion unveiling the annual report.

Researchers analyzed more than 40 publicly available longitudinal statistical indicators, converted each of them into an index score on a scale of 0 to 100, and evaluated three years of scores for each.

With the exception of data from an August survey of NDIA members, the Vital Signs study's data sets are “lagging indicators” that were fielded before COVID-19 struck the United States in March 2020, the report noted.

Wes Hallman, NDIA’s senior vice president of strategy and policy, said next year’s report will capture how the environment has changed due to the challenges surrounding the pandemic.

He noted that he expected to some significant changes and didn’t expect them to be positive. “But we’ll see what the data bears out,” he said.

The DIB entered the COVID-19 crisis in a weakened state, according to the analysis.

“This year six of the eight conditions earned composite scores lower than 80, three of which earned scores lower than 70, which we consider failing grades,” said Nick Jones, NDIA’s director of regulatory policy.

The scores suggest that the DIB is increasingly struggling to meet the challenges it faces, the report noted.

Industrial security earned the lowest score, 56. It has become an increasingly important area as contractors face data breaches and espionage attacks from state and non-state actors, the report noted.

“Industrial security conditions continue to decline, losing ground on what was an already poor score,” the report said. “This decline reflects larger trends in the erosion of industrial cybersecurity despite increasing attention and resources being dedicated to combating the threat.”

This decrease is due to the worsening of information security conditions, including a number of newly report IT cyber vulnerabilities, it noted. However, on a positive note, the report said the threat to intellectual property rights is declining.

Defense industry production inputs also scored poorly with a 68, which has held steady since 2018, the study noted.

“Major production inputs include the skilled labor, intermediate goods and services, and raw materials used to manufacture or develop end-products and services for DoD consumption,” the document said. “Our estimate of the size of the defense industry workforce, currently about 1.1 million people, falls substantially below its mid-1980s peak size of 3.2 million.”

Innovation conditions within the DIB dropped two points from its 2018 evaluation and received a score of 71, researchers found.

“Industrial innovation conditions remained poor and continued a downward trend,” the report said. “The decrease in innovation investments stems from cuts made within the scientific R&D services industries — typically those focused on basic research.”

Hallman noted that this is particularly concerning because innovation “is the American way of war.” Instead of the government driving spending on basic science, innovation is largely coming from the commercial sector.

That puts the United States in a precarious position, he noted.

“Our competitors globally have closed the gap, and that gap closing over time is truly what concerns me,” he said. “If we want to maintain our superiority, .... that piece on innovation has to ramp back up because that’s where our strategic advantage over time, I believe, lies.”

Scores for political and regulatory conditions also dropped by 10 points since 2018 for a total score of 72. Researchers analyzed public opinion, congressional actions and regulatory actions to assess this area.

“All three indicators saw a score decrease from 2018 to 2020, with public opinion and regulatory conditions scoring particularly poorly,” the report said. “Two examples from the current environment are the implementation of Section 889 of the fiscal year 2019 [National Defense Authorization Act] and the Cybersecurity Maturity Model Certification framework, which have created additional regulatory burdens for all defense contractors.”

Additionally, there was a large decrease in public opinion related to the DIB, “possibly due to rising defense budgets,” it said.

Supply chain conditions decreased by six points since 2018 and received a score of 77 for 2020. While supply chain issues have been brought to the forefront due to the ongoing COVID-19 crisis, the report assessed them before the pandemic began.

The document noted that while financial performance and average turnover ratio scored a passing grade, the overall trends are of great concern.

“Moreover, the score for contract failure increased, possibly due to an uptick in the management and oversight of contract awards,” the report said. “Whereas this outcome constitutes the only positive change in the section, it represents the worst preforming indicator by far.”

While the productive capacity and surge readiness condition has seen a 12-point increase since 2018, it only received a score of 66, which is a large drop from 2019, the report noted.

“Capacity utilization remains high but is trending in the wrong direction," the document said. "This trend has been slowly unfolding for a few years, finally appearing in scores through the trailing averages.”

Researchers noted that industry must be ready to respond to a surge in demand for its products. “The sudden arrival of the COVID-19 pandemic showed just how quickly surge capacity can be needed,” the study said.

Areas of confidence include the competitive environment and state of demand for defense goods and services, according to the report.

The Defense Department has recently averaged about 701,000 prime contracts each year and had over $394 billion in prime contract obligations in 2019, the document said. The study gave the competition condition a score of 91 — an uptick of two points since 2018.

“Several high-scoring indicators drove the strength of market competition conditions, including the low level of market concentration of total contract award dollars, the relatively low share of total contract award dollars received by foreign contractors, and the high level of capital expenditures in the defense industrial base,” the report said.

Additionally, demand for defense goods and services received a score of 93 for 2020, which was a 16-point increase over the 2018 score, the document said.

“This high score for demand is a result of the recent increase in contract obligations issued by DoD,” the report said. Total contract obligations issued by the Pentagon grew from $329 billion in fiscal year 2017 to $394 billion in fiscal year 2019 — a 20 percent increase, the document noted. Additionally, foreign military sales increased by nearly 20 percent over the same time period.

Update: This story has been updated to include additional comments from NDIA executives.

Innovation conditions within the DIB dropped two points from its 2018 evaluation and received a score of 71, researchers found. “Industrial innovation conditions remained poor and continued a downward trend,” the report said. “The decrease in innovation investments stems from cuts made within the scientific R&D services industries — typically those focused on basic research.” Hallman noted that this is particularly concerning because innovation “is the American way of war.” Instead of the government driving spending on basic science, innovation is largely coming from the commercial sector. That puts the United States in a precarious position, he noted. “Our competitors globally have closed the gap, and that gap closing over time is truly what concerns me,” he said. “If we want to maintain our superiority, .... that piece on innovation has to ramp back up because that’s where our strategic advantage over time, I believe, lies.” Paraphrasing Olympia Dukakis in "Moon Struck" response to the answer as to why men fool around : "That's it. That's it. China is cleaning our clocks in materials R&D". I have ACS CAS Abstract studies that show it clearly. 80% of materials development in nano-technology with my invention organometallics is coming out of China - just as it did in the '70's and '80's in microelectronics from Japan. When I mixed LOVA tank gun propellant (RDX/CAB) in a bunker at Indian Head in the mid-80's - all of the instrumentation was SONY from Japan. Biography: Salvatore J. Monte, President of Kenrich Petrochemicals, Inc.; B.C.E. Manhattan College; M.S.-Polymeric Materials, NYU Tandon School of Engineering; Member Plastics Hall of Fame 2021-the Plastics Academy; Society Plastics Engineers Fellow & Honored Service Member; Licensed P.E.; Plastics Industry Association Recycle Subcommittee-Compatibilizers; Board of Governors, Plastics Pioneers Association-MTS Newsletter Chair; 32-U.S. Patents – most recent US Patent 2020/0071230 A1 dated Mar. 5, 2020; Lectured Worldwide on Titanate & Zirconate Coupling agents; 450-American Chemical Society CAS Abstracts of published “Works by S.J. Monte”; Classified Top Secret for Solid Rocket Fuel and Energetic Composites Patents for the Insensitive Munitions Program; Lifetime member of the National Defense Industrial Association; Lifetime Member of the BOD-SPE ThermoPlastics Materials & Foams Division – Annual Scholarship named: Salvatore J. Monte Thermoplastic Materials & Foams Division Scholarship; External Advisory Committee-UCF NanoScience Technology Center; former Chairman of the NYRG-ACS Rubber Division; former President of the SPE P-NJ Section; Testified several times before Congress on Trade and IP Protection; Business Man of the Year 2015-Bayonne Chamber of Commerce; Federated Society Coatings Technology C. Homer Flynn Award for Technical Excellence; Recipient of the Albert Nelson Marquis Lifetime Achievement Award; Rotary Paul Harris Fellow; UA Million Miler; Member PIA, SPE, ACS, ASCE, AIChE, SAMPE, the GRAPHENE COUNCIL, the Vinyl Sustainability Council. Contact Information: Salvatore J. Monte P.E., B.C.E., M.S.-Polymeric Materials, Fellow (SPE) President Kenrich Petrochemicals, Inc. PO Box 32 Bayonne, NJ 07002 USA Tel No. 201-823-9000 Fax