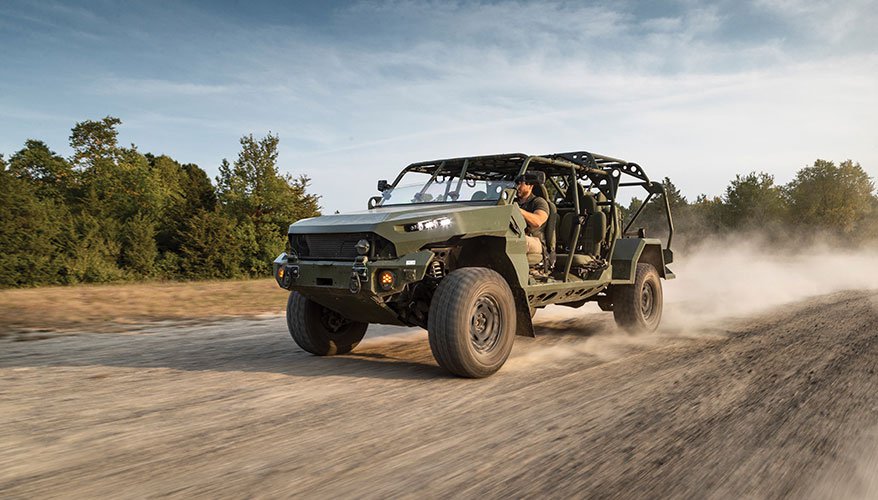 The Army is testing its new transport vehicle less than a year after it awarded a contract to GM Defense for the program.

Developmental testing of the Infantry Squad Vehicle, or ISV, began in November and will culminate in an initial operational test in August, said Steve Herrick, product lead for ground mobility vehicles at the program executive office for combat support and combat service support.

The Army received the first batch of its new ISVs in October from GM Defense 120 days after awarding the company a contract. The initial delivery of the vehicles is part of the Army’s effort to fast-track the acquisition of an all-terrain, highly transportable platform intended to provide ground mobility capabilities for infantry brigade combat teams.

The ISV is an all-terrain troop carrier for nine infantry squad soldiers and their associated equipment. The vehicle has a payload requirement of 3,200 pounds and a maximum weight of 5,000 pounds. It is also required to be transportable on a CH-47 Chinook helicopter and airdropped by C-17 and C-130 aircraft, according to the Army.

GM Defense was awarded a $214 million contract for the program in June to manufacture 649 ISVs. The company will support the production of up to 2,065 vehicles with additional authorization over eight years.

Following the award, the company has since delivered all nine test assets to proving grounds and continues to produce vehicles per the contract requirements, the company’s Chief Engineer Mark Dickens said in an interview.

The Army’s product lead for ground mobility vehicles office, in coordination with Army Test and Evaluation Command, has already executed key safety and performance tests, Herrick said in an email.

Testing for reliability, availability and maintainability was slated to take place at Yuma Proving Ground, Arizona, and Aberdeen Proving Ground, Maryland, in February, he said.

The vehicle has already completed successful tests in the static drops category for low velocity airdrop. Low velocity airdrop is the delivery of a platform or other asset out of an aircraft involving parachutes that are designed to slow the speed of descent as much as possible so it impacts the ground with minimal force.

“The program management team is executing an aggressive acquisition strategy to field the first unit equipped,” which is slated to be the 1st Brigade Combat Team, 82nd Airborne Division, at Fort Bragg within the third quarter of this fiscal year, he said.

The ISV is based off General Motors’ Chevrolet Colorado ZR2 mid-size truck. The majority of the offering is crafted from commercial-off-the-shelf parts.

Some 90 percent of the vehicle is made from COTS components, which has enabled fast-paced deliveries, lowered costs and simplified parts sustainment, Dickens said.

The ISV program is the first major award for GM Defense since the subsidiary was re-established by its parent company in 2017. The company returned to the defense market in 2017 after a long hiatus that began when a previous iteration of GM Defense was sold to General Dynamics in 2003.

Tom Spoehr, director of the Heritage Foundation’s Center for National Defense, commended the Army for the speed of the program, noting that the service has refrained from burdening the effort by adding unnecessary requirements.

“The program is moving at a decent rate of pace. It has not been slowed down. It hasn’t had any delays, protests, setbacks,” he said. “They’ve taken a very hard line in terms of just keeping this program very simple.”

The high percentage of commercial equipment in the program makes it well suited for a more rapid acquisition strategy, Spoehr said.

The Army “probably looked to what [the] defense industry had out there, and maybe even tailored their requirements in that direction,” he said.

The Pentagon’s effort to embrace commercial capabilities that meet its requirements is a step in the right direction, Spoehr said.

“You don’t want the military to be completely oblivious to what industry has to offer, so I think this is a good marriage of both,” he added.

During the ISV competition, the Army selected GM Defense, an Oshkosh Defense-Flyer Defense team and an SAIC-Polaris partnership to build two prototypes each. The teams were awarded a $1 million other transaction authority agreement to build the vehicles. OTAs are a contracting mechanism that allow for more rapid prototyping efforts than traditional contracting methods.

According to the report from the Pentagon’s former Director of Operational Test and Evaluation Robert Behler — which was released this January — the vehicles were constricting for soldiers.

“All vendors’ ISVs are cramped and soldiers cannot reach, stow and secure equipment as needed, degrading and slowing mission operations,” the report said. During the tests, “soldiers on all ISVs could not readily access items in their rucksacks without stopping the movement, dismounting and removing their rucksacks from the vehicle.”

Despite these findings, Herrick said the ISV still meets all of the requirements created for the program.

“The Army’s assessment is that the ISV requirement and solution set are in alignment,” he said.

“Soldiers who evaluated the ISV prototypes in both soldier touchpoints were able to carry their rucksacks, helmets, vests, individual weapons and night-vision goggles for missions,” he said. “There are no recommendations for change at this time that have not already been implemented.”

When asked about the report, Dickens said the soldier feedback GM Defense received from the touchpoints was favorable, noting the company found a unique seating configuration for its offering given the small footprint laid out in the Army’s requirements.

Spoehr also noted that although the DOT&E finding was valid, a vehicle with strict requirements such as carrying nine soldiers and having the ability to fit inside a CH-47 Chinook aircraft is going to be a cramped ride.

“The parameters that the Army specified — the weight, the height, all those kinds of things — it was going to be cramped no matter what,” he said. “The laws of physics makes this a cramped vehicle, period. To get nine soldiers on it and it has to be this [specific] weight and size — there’s no way it is not going to be cramped.”

Meanwhile, GM Defense has started renovations to a North Carolina facility where it intends to manufacture the ISVs, Dickens said.
The first group of trucks will be built at General Motors’ Milford Proving Ground in Michigan. Later this year, production of the vehicles will move to a Concord, North Carolina, facility, a plan that has long been in place, he noted.

Construction at the 75,000-square-foot facility is expected to continue through early spring 2021, and the production line there will begin delivering vehicles in April 2021, according to the company.

The facility can support the production of up to 2,065 vehicles with additional authorization over eight years.

The company is duplicating its production processes from Milford Proving Ground at the North Carolina plant, Dickens said. Many individuals currently working out of Milford were hired from the North Carolina area and brought to the proving ground to be trained prior to working at the new facility.

I think that some of the ISV's storage issues can be resolved with tough plastic storage bins bolted over the rear fender for easier access to critical items than stopping and unzipping a rucksack.

Sure, the ISV will be cramped...comfort isn't normally the forte of the U.S. Army although I do wonder why the U.S. Army couldn't have adopted the MANTIS 6X6 APC that seats three crew and 10 soldiers in MRAP armored style and be sling-loaded under a CH-47 and carried by C-130 of C-17.

Surely the ISV should have some swing-arm passenger machine guns even though it's not a FAV. Not having some form of weaponry is just a bit silly because the ISV can be used as a QRF vehicle. Low side storage bins for ammo cans similar to the SOCOM GMV HMMWV should be built between the wheels. If possible, a ballistic windshield kit should be developed with anti-fog and anti-dust coating properties.

I am very surprised that the ISV doesn't have super-tough rear mudflaps or run-flat tires...it should...and a ballistic self-sealing fuel tank even though it is diesel. These will definitely add to the weight of the ISV, but no one said that ALL ISVs HAVE TO ACCOMMODATE nine soldiers. If carrying four to six soldiers as QRF, then the ISV should have kits to increase its survivability, lethality, comfort, range, and endurance.