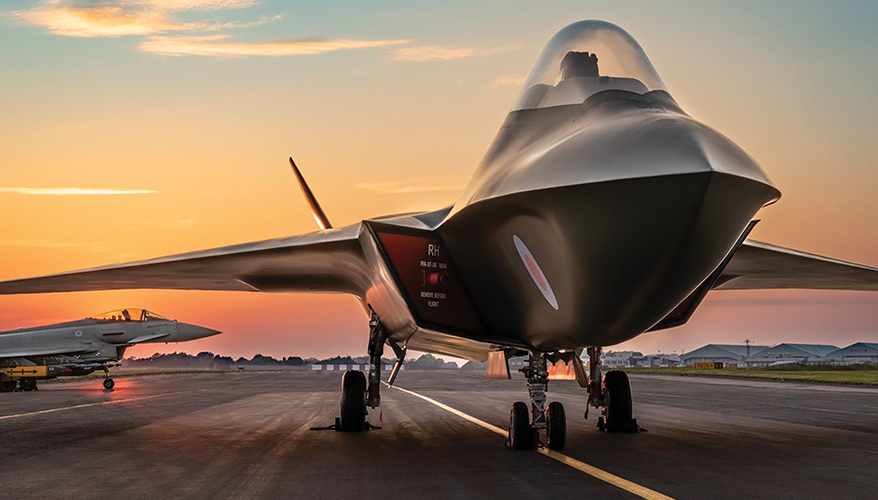 LONDON — Three years after the United Kingdom and its partners announced the development of a sixth-generation jet fighter known as the Tempest, technology maturation continues with the program embracing digital engineering concepts to shorten its development timeline.

Tempest, also called the future combat air system, or FCAS, in the United Kingdom, is being developed by the U.K., Swedish and Italian air forces and their respective prime contractors, BAE Systems, SAAB and Leonardo.

Recently, Japan has joined the program in a limited capacity.

While the initiative started in 2015, it wasn’t until three years later when the Tempest program came to light at the Farnborough International Airshow. Its concept calls for the platform to be either manned or unmanned and capable of controlling “swarms” of smaller drones.

Air Commodore Jonny Moreton, director of the future combat air program at the Royal Air Force, said the project is still in the concept and development phase.

“The purpose of this phase is to look at the progress, make an assessment. And then in late 2025, go to our governments, U.K., Italy, Sweden — and potentially Japan — and say, ‘This is the program. This is what we can deliver. This is the timeline,’” he said at the Defense and Security Equipment International conference in London in September.

The respective governments will then make a decision on how to proceed, he added.

Collins Aerospace, Rolls-Royce and MBDA are among the other major contractors involved in the project.

“We’ve made huge progress. It was really important from a U.K. perspective to ensure that we built up again those design skills that are so important to being at the heart of generating capability,” Holmes said.

The program is embracing digital engineering, including concepts such as digital twins, along with additive manufacturing in order to sharply reduce the amount of time it takes to conceive, develop and produce a new generation of jet fighters.

This accelerated timeline is one of the program’s primary focuses, said Moreton. “One of the goals is to break the 40-year cycle where something is conceived, developed and built and after it’s in the air 20 years, start thinking about what comes next, and then wonder, ‘Where did my industrial expertise go?’”

Tempest is aiming for a 10-to-15 year development cycle and flying its first aircraft by 2035, he added.

The program is embracing digital engineering concepts that former U.S. Air Force acquisition chief Will Roper espoused prior to his departure from government service. Roper’s name and concepts were mentioned several times during panel discussions at the conference.

Roper, who has now gone on to become a senior counselor at Pallas Advisors, a consultancy, is an advisor on the program, Moreton acknowledged.

“Will Roper is engaged at a very low level as an advisor to the program … to challenge us and to ask challenging questions of us and for us to ask him of his experiences,” Moreton said.

The “digital engineering revolution” will not only help drastically cut the Tempest’s development timeline but will also help solve the requirements conundrum that plagued past programs, the company officials on the panel said.

Moreton spoke of the need to “future proof” the Tempest. The problem with past jet fighter programs was their decades-long development timelines. Setting requirements too early and engraving them in stone resulted in aircraft being outdated by the time they were finally fielded.

Unlike the F-35 joint strike fighter program, which also began development as an international program, but under U.S. leadership, partner nations will be free to modify and upgrade the aircraft however they wish.

One such new potential partner is Japan. While the nation is not yet formally a partner, a Japanese flag flew over the Royal Air Force’s Tempest display along with Sweden, Italy and the United Kingdom’s, at the DSEI exhibit.

Moreton said Japan is currently doing an energy study for the program. It would be a good partner as it is developing its own sixth-gen jet fighter, the F-X, with an identical 2035 timeline, and is operating under a similar threat environment, he added.

Michael Christie, director of the FCAS program for BAE Systems, welcomed Japan as a partner as it has deep industrial capabilities.

The United Kingdom was one of the tier 1 international partners on the F-35 program and contributed 10 percent of its development costs, although none of the speakers mentioned it by name.

Christie said: “Our goal was to create something where everybody benefited from it, and I believe this is a very different collaboration objective [compared to] some of the other collaborative programs over the last few decades.

“We’re not going to achieve this if we all behave like three organizations looking after our own values and our own agendas. We have to create a single agenda,” he said.

Holmes said: “As we bring in partners from Italy, Sweden and Japan, we can only grow stronger.”

Conrad Banks, chief engineer for future programs at Rolls-Royce, said the current concept is for Tempest to have a hybrid engine.

There are now 500 engineers working at the company on the program, he said.

”We are embracing gas turbines and electrical systems as an integrated power system,” he said, describing the concept as a “flying power station.”

It could generate 10 times the electrical power as the Eurofighter Typhoon, another aircraft developed by an international consortium.

That power could be used for sensors, avionics and directed energy weapons, he said.

An integrated power system will control the complex interchange between jet fuel and electric systems. It won’t be unlike hybrid cars where drivers input their travel plans ahead of time so the computer can calculate when they will need an extra boost in places such as highways.

“We have an intelligent power manager — being developed through the Tempest program — that decides whether electrical energy is going to go from the gas turbine to charging the batteries, or vice versa,” Banks said.

An intelligent agent in the computer algorithms will learn the best way to use energy.

It “learns the most effective way of moving power from one spool to the other, from the engine spools to the battery from the battery to the engine,” he said.

Meanwhile, Leonardo contracted with U.K.-based vendor 2Excel Aviation to outfit a Boeing 757-200 airliner to serve as a testbed for the Tempest program.

The flight test aircraft, dubbed “Excalibur,” will be used to carry out sensor fusion, autonomous operations, communications and provide a “real-world” platform for an aircraft that is largely being developed through digital engineering, according to a press release.

The “flying laboratory” is envisioned for the later stages of the program, it said.

Holmes said real-world tests on the aircraft will be vital.

“When we look at sensors, it’s important that we test them in a representative environment. They often will work perfectly on the test bench and in the labs, but when you get them up into the real environment — that cluttered real [electronic warfare] environment — it is much more challenging.”

An audience member asked Holmes about possible sacrifices the Tempest might make to achieve stealth. Was there a drive for higher aircraft performance than the Typhoon or would some performance be sacrificed for stealth, which was the case for the F-35?

Information will be the crux of winning and losing in future warfare, he said.

“And so our focus is absolutely on ensuring that we get the sensor and information architecture correct. And we, if necessary, might change other capabilities out for that,” he said, adding that he didn’t want to go into detail in public.

“But we do understand what’s important to us,” he said.

Richard Berthon, director of future air combat at the U.K. Ministry of Defence, said, “The U.K. and our international partners are accelerating towards a very dynamic program.”

A “digital revolution” may elicit skepticism, he said.

“Anything with the word ‘revolution’ and you should probably be suspicious and skeptical about — whether they mean something new rather than just business as usual. But I genuinely believe that we all have something revolutionary, on many different levels,” he said.