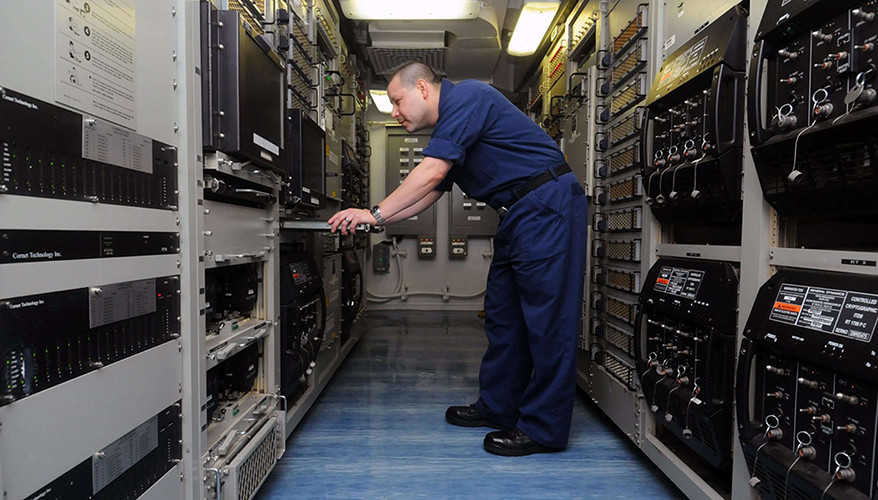 DMR radios aboard a Navy ship

Ships rely on communications, and communications rely on radios. But while the demand and complexity for shipboard tactical comms is growing, the radios are shrinking.

The Navy uses the AN/USC-61 (C) Digital Modular Radio (DMR), which is well established in the U.S. fleet, as well as the newer, more compact Badger software-defined radio to save space, weight and power aboard ships.

General Dynamics Mission Systems’ Digital Modular Radio and Badger both have eight circuits per channel, with DMR having four channels for a total of 32 circuits and Badger being a smaller unit and having two channels for a total of 16 circuits, said Bill Rau, vice president for surface ship warfare systems at General Dynamics. The Digital Modular Radio can handle 18 different waveforms, from ultra-high frequency tactical voice circuits to satellite communications.

With the Digital Modular Radio, the software defines how and what the frequency is, what the power will be, the modulation, the crypto, and then selects the appropriate antenna. It can do this for each of those different circuits across all the 18 different waveforms.

The result is the traditional radio room with racks of transmitters, receivers, power amplifiers, crypto gear and antenna couplers can be pared down dramatically, saving space, weight and power, as well as reducing the amount of heat generated, Rau said.

It’s the software that defines the path for each waveform being used. The Digital Modular Radio is built around a semiconductor integrated circuit chip called a field programmable gate array, or FPGA, according to Michael Anderson, head of the joint technical communications and the software defined radio group Naval Information Warfare Center-Pacific in San Diego.

“The world of electronics has really changed significantly from the days of needing massive circuit boards with hundreds of integrated circuits and complex connections to today when it all fits on one chip,” he said.

Different waveforms can use very different antennas, said Cesar Garcia, head of the SATCOM control systems branch and lead for the DMR engineering and test integrated product team at the warfare center. “We can’t communicate with a satellite 23,000 miles out in space with an antenna that’s a half a centimeter long.”

Anderson said the “next-generation radios, such as the DMR, can manage all those different devices with one FPGA-based system-on-chip.”

In the software-defined radio, a waveform is a software application that can modify the behavior of mixers, filters, preamplifiers, modulators and modulators signal detectors. The operator can control all the circuits for multiple DMRs from a single human-machine interface.

According to Garcia, fielding one type of radio versus 18 simplifies training and reduces the logistics footprint. The programmable logic within the radio allows additional waveforms to be added without adding new radios. “You have the radio hardware and the ancillary parts.

And the training is already in place, so you can train how to use the radio with variations of the waveforms using the same control user interface,” he said. New or upgraded waveforms can be included without adding more radios, Anderson said. “The only limitation is that those waveforms would have to be within the frequency range of the existing hardware,” he added.

General Dynamics Mission Systems has delivered nearly 1,000 Digital Modular Radios to the Navy, and the service continues to supply them to the fleet. A more compact Badger has been developed. It provides half of the capability of the DMR — two channels instead of four — but in just one quarter of the space, Rau said.

The Badger reuses DMR circuitry, but General Dynamics was able to reduce the size by removing some of the interfaces. Badger has basically the same FPGAs as DMR, and the same modem and internal crypto hardware, he added.

Badger has shown how the DMR capability can fit in a smaller package. A subsequent iteration might be a unit that’s the same size as the current system but with twice the capacity — eight channels instead of four.

Software-defined radios are a way to put a lot of capability in a box, he said. “It’s powerful hardware that gets its personality from the software that’s running on it,” he said.

This SDR involves digital signal processing and has a configurable radio frequency section that can emulate 20 or 30 existing legacy military tactical radios based on the different waveforms. It’s a transceiver with four independent channels — four antennas hooked up to it — and each one can be tuned to any frequency between 2 megahertz and 2 gigahertz, which encompasses all the frequencies that Navy ships use for communications, Rau said.