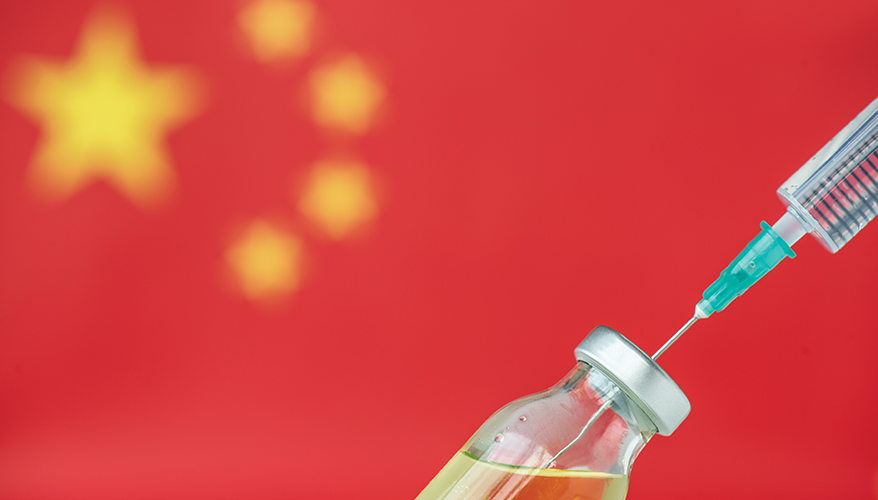 Biotechnology is one of the Defense Department’s top modernization priorities, and it is often considered to be the industry of the future.

Likewise, China is aggressively competing for primacy in this sector by pouring more than $100 billion into its domestic enterprises and foreign investments. In Beijing’s “Military-Civil Fusion Strategy,” the People’s Liberation Army has the lead role in exploiting and weaponizing biotechnology for its offensive capabilities, including “specific ethnic genetic attacks.”

How can the U.S. government maintain biotechnological preeminence and leverage the world’s most innovative private sector? Operation Warp Speed may provide a clue. It mobilized national biotech resources to rapidly acquire and deploy COVID-19 vaccines. Its success can be attributed to many factors.

One that needs special attention is the expanded use of other transaction authority acquisition agreements. About 80 percent of Operation Warp Speed’s funding was obligated through OTAs, with the rest using more traditional Federal Acquisition Regulations-based contracts.

Are OTAs the best way for the department to acquire biotech capabilities compared to traditional acquisition pathways? The short answer is, “yes — for now.” However, there are more strategic policy tools that need to be implemented for full benefit.

What exactly is the other transaction authority? OTA is an authority given to the government in 10 USC 2371b to carry out certain research, prototype and production projects. They are neither contracts, grants, nor cooperative agreements, and they are not subject to many rules prescribed under FAR. OTAs allow the government to incorporate more flexible and business-oriented terms that can reflect the commercial world’s best practices, which theoretically should make these programs more agile and efficient compared to traditional acquisitions.

Though originated in the 1950s, the use of OTA has only started to increase since the passage of the 2015 National Defense Authorization Act, which permanentized the Defense Department’s other transaction authority, and modified the definition of nontraditional defense contractor.

A major advantage of OTA is that it encourages the department to work with nontraditional defense contractors. That includes most of the companies in emerging technology sectors, such as biotech. OTAs also allow for non-competitive, follow-on production contracts with the department.

One major challenge the commercial industry has with the government during the acquisition process is the ownership of intellectual property and various rights for the government to march in and intervene, as granted in the Bayh-Dole Act. OTAs often address it by eliminating or reducing provisions of Bayh-Dole, thus incentivizing companies to make high-risk ventures with the Defense Department.

In fiscal year 2019, OTAs accounted for 18 percent of the department’s total research-and-development portfolio, a stark increase from 3 percent in 2015. In dollar amount, OTA obligations increased from $0.7 billion to $7.4 billion, a 712 percent increase. According to a Center for Strategic and International Studies analysis, 63 percent of defense OTA obligations went toward “advanced component development and prototypes” — a phase to evaluate integrated technologies, representative models, or prototype systems in high fidelity and realistic operating environments — akin to Phase 1 and 2 clinical trials in the biotech realm.

In the first half of fiscal year 2020 when Operation Warp Speed had taken full effect, the dollar amount of OTAs was roughly 1.6 times the combined amount of OTAs from 2015-2019.

The pandemic helped bring the U.S. government’s attention to biotech. A notable example of OTA in biotech is Gilead Science’s remdesivir — now branded Veklury — an antiviral medication for COVID-19 treatment. The drug development program had started out in the early 2000s with the intention to treat Hepatitis C. In 2016, the Army and Gilead signed a prototyping OTA to evaluate remdesivir’s efficacy against Ebola, and the Army would contribute up to $50 million to support animal testing.

The clinical trials in Congo later indicated that the drug was less efficacious compared to other treatments, but instead of ending the acquisition, this OTA allowed Gilead to pivot to other viral families, such as coronaviruses. This flexibility in decision, combined with decades of dedication from the industry, led to a lifesaving, first-in-class drug to combat COVID-19.

The OTA set clear limits to the government’s claim in general intellectual property rights, subject invention rights, license rights and data rights. The department expanded Gilead’s background IP on the drug compound and applications, recognized that there was no new discovery from federal funding, and stipulated that the collaboration was not subject to Bayh-Dole.

Another example is the accelerated development of COVID-19 vaccines under Operation Warp Speed. The effort was faced with two daunting challenges: a short timeline and limited large-scale manufacturing capacity and distribution.

In the pharmaceutical industry, after preclinical animal studies an investigational drug needs to go through Phase 1-3 clinical trials before obtaining Food and Drug Administration approval and market authorization, with each subsequent phase requiring an increased demand for manufacturing capacity. These constitute costs and risks inherent to investment decisions that biotech companies need to deliberate, and the data to support decision-making normally take years to generate.

The operation accelerated this process by allowing certain adaptations to clinical development whenever legally and scientifically permissible.

In FDA’s 2020 guidance, companies may use evidence collected from similar products with the same platform technology in lieu of certain clinical data perimeters. In addition, FDA also allows companies to conduct concurrent trials or combine clinical trials. The scientific rigidity and data integrity were all carefully monitored and reviewed by FDA, and the companies were in constant communication with the authority.

Operation Warp Speed OTAs also supported companies to scale-up manufacturing while the assets were still risky. In other words, some companies were to start building manufacturing facilities while the drugs were still in Phase 1 trials. Normally this business decision would be deemed unfeasible, but federal funding would help mitigate those risks and incentivize industry to continue this pursuit. For example, the Biomedical Advanced Research and Development Agency (BARDA) expanded a preexisting OTA with Janssen Pharmaceutical — part of Johnson & Johnson. The original purpose of the OTA signed in 2017 was to promote development of treatment or preventative tools for influenza viruses, and its award ceiling was $237 million. The agreement was amended 13 times and as of March 2021, the government had obligated over $1 billion in support of R&D, manufacturing and purchase.

Operation Warp Speed is the type of pandemic-time industrial mobilization that we hope to not see again. The amount of resources and tradeoffs that were involved cannot be sustained in the long run. How do we create a mode of collaboration between the U.S. government’s biodefense community and the biotech industry in peacetime?

The flexibility of OTA is a double-edge sword. While they are welcomed in the commercial sector, the business-oriented practices present a learning curve for the federal acquisition workforce, who now need to understand commercial R&D lifecycles, competitive intelligence, intellectual property and business strategy. Federal program managers are often rotated in and out of jobs and their career incentives are not aligned with the success of these programs. In the case of remdesivir, the program manager changed four times, creating complication in preserving best practices and communication.

In addition, OTAs require the signing parties to negotiate clauses in IP, dispute, price reasonableness, payable milestones, termination, etc., which would have been pre-agreed-to, standardized terms in the traditional FAR-based acquisition. These negotiations are often difficult and time-consuming.

It is unrealistic for the Defense Department to create an industry-specific acquisition pathway that falls under FAR. Instead, it can start standardizing an industry-specific OTA template across biodefense-related agencies as an interim solution. The standardized OTA would not be legally binding, but serve as a foundation. The sheer numbers signed during the COVID pandemic present a good starting point to review best practices.

Most biotech OTAs have been exempted from Bayh-Dole, and have addressed similar concerns with respect to IP, such as patents, subject inventions, license, and technical data by reducing the government’s potential claim. Similarly, Cost Accounting Standards and Truth in Negotiations acts — government contracting practices that tend to thwart the private sector — are not applied to OTAs.

What needs improvement is provisions of export control. Most traditional defense systems are subject to International Traffic in Arms Regulations. U.S. biotechnologies are not weapons, but they would still be designated “TID Businesses” for their use of critical infrastructure and sensitive personal data. Should foreign entities such as China attempt to obtain these technologies or data through mergers or other non-passive investments, then the U.S. government has the right to intervene under the Foreign Investment Risk Review Modernization Act (FIRRMA).

This is the tricky part. If the said U.S. company only generates 3 percent of its revenue from a product that is partially funded by a defense OTA, then is it fair put the entire company’s business activities on a FIRRMA watchlist? But what if China gains partial control of the U.S. company and starts reviewing data and records of the defense-funded project?

In addition to industrial espionage, which costs the United States $300 billion to $600 billion a year, China is exploiting the free trade environment to acquire emerging technology and sensitive information on U.S. citizens in the biotech sector.

These business exploitations do not stop at mergers and acquisitions. They also include early stage investments through venture capital or private equity that are partnered with U.S. entities.

Equally important as the incoming investments, are the outgoing investments from U.S. biotech firms to China. China’s health care market ranks No. 2 in the world and is too big to ignore.

The Chinese government aims to achieve its ambitious “Made in China 2025” goal by employing a familiar Chinese strategy. It begins with posturing to decouple from the world economy and boost domestic industry by tightening trade laws, followed by the act of leaving a lifeline — a gray area where conditional market access is a possibility. Once baited, the conditions are usually in terms of gaining intellectual property.

China’s protectionism has manifested through the recent passing of the Biosecurity Law, Human Genetic Resources Regulations, and Personal Data Protection Law, all aimed to create trade barriers for foreign biotech companies, who are now stipulated to “ensure that Chinese-side units participate substantively … and lawfully share in the relevant interests.” Yet, many Western firms are still rushing into China. In 2020, 271 cross-border partnerships involving clinical trials, data sharing, and commercialization were signed. That number is 50 percent more than the previous year. Many of these firms also have at some point received federal funding, including OTAs.

These U.S. firms are not at fault, however. Most biotech companies are driven by their passion in helping patients, and there are hundreds of millions of them with unmet needs in China. Their right to better treatment should not be limited by arbitrary trade barriers, or be used as grounds by China to violate intellectual property and weaponize medical science.

The U.S. government has supported American firms through OTAs, now the next step is to think strategically about keeping adversaries’ money out, and securing a trade and business environment where U.S. firms could freely operate and access international markets without political pressure to concede intellectual property.

Eric Du was a member of Auriga Advisors LLC, a U.S.-based consultancy that specializes in connecting U.S. and Taiwanese defense businesses/entities. He has worked in R&D strategy and operations in the U.S. biotechnology industry and provided business thought leadership in various industry groups.