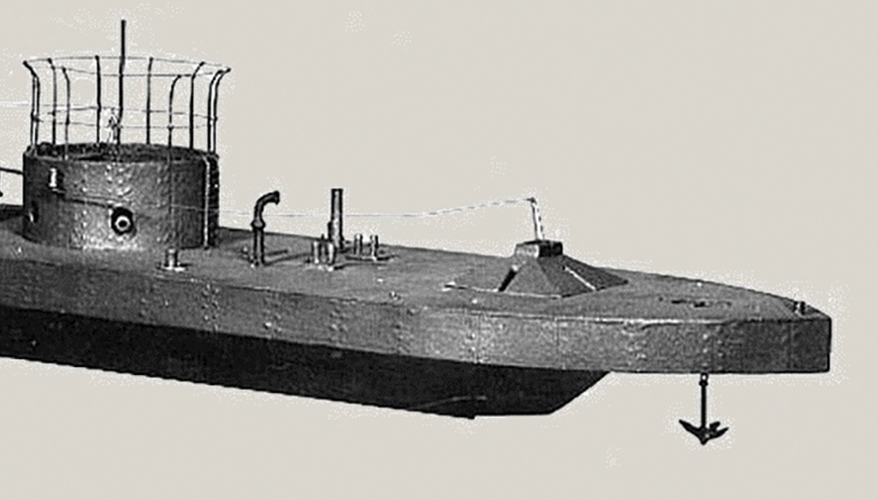 In August, I wrote about the development of the Confederate navy ironclad CSS Virginia, and the lessons it holds for the modern age. As I recounted, the Virginia represented a leap in technology that forever changed naval warfare.

But as I also noted, the Virginia met her match, the USS Monitor, after only a single day of fighting. Like the Virginia, the story of the Monitor’s development also holds many lessons for our modern era.

Word that the former USS Merrimack was being rebuilt as an iron-covered warship had made its way back to the Union almost as soon as work began in June 1861. Intelligence gathering was widespread on both sides during the Civil War, and the Confederates clearly failed when it came to operations security for their most advanced naval project.

By Aug. 3, the U.S. Congress had already appropriated $1.5 million to build a countermeasure, about twice the cost of a contemporary ship-of-the-line, equivalent to about $50 million in current year dollars. Ironically, there is evidence that the Confederates pursued an armored warship because they erroneously believed the Union was building its own, inadvertently igniting an arms race.

Six days after monies had been appropriated, the Union Navy issued a request for proposals, due a month later. The winning design that became the USS Monitor wasn’t even one of the early submissions, but instead was an addendum to a proposal for a more conventional armored sailing ship.

The Navy’s review board chose the Monitor as one of three finalists from an original list of 17 proposals, but they remained skeptical of the wildly unconventional design. It took the intervention of President Lincoln himself, overruling the Navy Board, for the Monitor design to be selected, with a contract dated Sept. 21. Lincoln is the only president ever awarded a U.S. patent, for a device to float river boats over sand bars, so he was himself an inventor with a keen interest in naval engineering.

The Monitor’s designer, John Ericsson, was one of the 19th century’s most remarkable engineers. Born in Sweden in 1803, his skills as an inventor were recognized at a very early age. Though lacking in much formal education, Ericsson contributed novel ideas on everything from steam locomotives to heat engines and naval propellers. He immigrated to America in 1839, encouraged by Robert Stockton who had recruited Ericsson to work on the propeller-driven USS Princeton, the most advanced warship of its time.

Unfortunately, Stockton eventually squeezed Ericsson out of the project, then made changes to his designs with disastrous results. During a cruise down the Potomac River with President John Tyler and members of the cabinet onboard, one of the Princeton’s guns exploded, killing the secretary of state and the secretary of the Navy. Though Ericsson was not responsible, Stockton managed to shift the blame to him anyway.

Think then how remarkable it was that two decades later the fate of the Union Navy was placed in the hands of a foreign-born inventor who was widely held responsible for inadvertently killing two cabinet members!

The Monitor had a long list of advances, including more than 40 patentable inventions, most notably a revolving turret that ultimately revolutionized naval warfare. Though she wasn’t delivered by the promised 100-day deadline, the Monitor came close. Launched on Jan. 30, 1862, she proceeded under tow for Hampton Roads after a month of sea trials, ready to meet the Virginia.

The match between the CSS Virginia and the USS Monitor on March 9, 1862, is often described as a draw, but to my way of thinking, it wasn’t even close. With its superior maneuverability and rotating turret, the Monitor clearly outclassed the Virginia. Neither ship could penetrate the other’s armor plating, but the Monitor could have prevailed if she had had the 16-inch guns that Ericsson had specified, instead of the 11-inch guns that were actually mounted in the turret. Remembering the explosion of the gun on the Princeton, it has been suggested that the Navy didn’t fully trust Ericsson and downrated the Monitor’s guns, so the ship was pulling her punches.

The story of the USS Monitor teaches us several lessons, including the value of intelligence gathering and the importance of rapid acquisition.

The Monitor also reminds us of the importance of accepting technological risk, as well as the role that well-informed, visionary leaders can play in championing emerging technologies, especially in countering a cautious consensus.

Ericsson’s personal story is also a reminder that we need to welcome innovators and be open to fresh ideas from nontraditional sources; and that second chances are sometimes well deserved.

The Confederates destroyed the Virginia just two months after her historic battle when they were forced to abandon Norfolk. The Monitor went on to serve until she was lost in rough seas off Cape Hatteras in December 1862, but her influence endures in the design of nearly every modern naval vessel.

Today her recovered remains are on display at the Mariners’ Museum in Newport News, Virginia, and well worth a visit to see an amazing example of a 160-year-old defense acquisition success story.