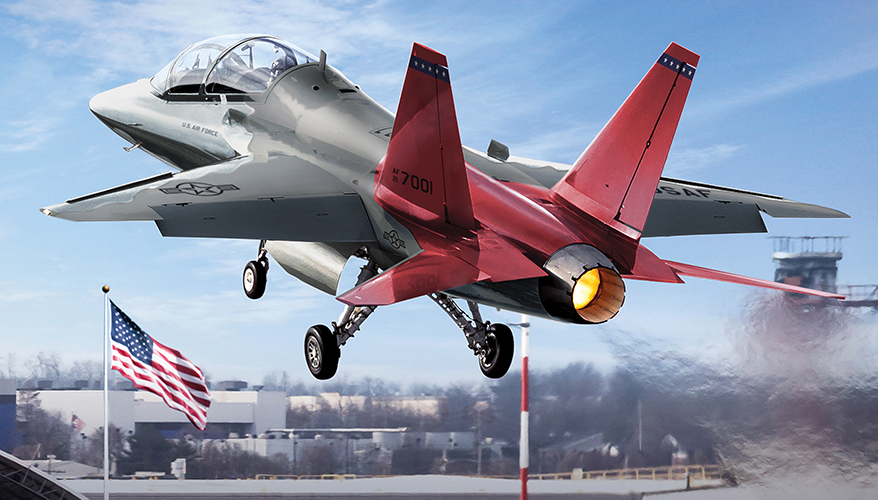 The pressure is on for Boeing and the Air Force to deliver on their T-7A Red Hawk trainer as the aircraft has hit developmental snags and COVID-related production delays that have pushed its schedule to the right.

The program — which encompasses aircraft, simulators and other advanced training capabilities — is meant to teach pilots to fly fourth- and fifth-generation fighter jets and bombers. The effort also includes maintenance simulators with physical devices and instructional techniques, including classroom, online and virtual training.

The Red Hawk is intended to replace the Air Force’s aging T-38C systems.

The service awarded Boeing — along with partner Saab — a $9.2 billion contract in 2018 to procure 351 advanced pilot training aircraft and 46 ground-based training systems.

The T-7A completed its critical design review in August 2020, which marked the end of the design phase and the beginning of the build and test segment of the program, according to the Department of the Air Force’s Acquisition biennial report for 2019 and 2020.

However, the effort faced a series of setbacks earlier this year following the discovery of a developmental issue as well as COVID-19 related supply chain problems, according to officials and company executives.

These issues have caused the program’s schedule to slip, pushing back a Milestone C decision from 2022 to 2023. It has also required modifications to the Air Force’s projected budget for the program.

In President Joe Biden’s fiscal year 2022 budget request, the Air Force asked for $188.9 million in research, development, test and evaluation funding and $10.4 million in procurement funding for the T-7A. However, that is $17.5 million less in RDT&E funding than the service had projected for fiscal 2022 in the most recent future years defense program.

“The decrease in funding, particularly on the T-7A, was based on Milestone C and some technical issues … [that] had to slide a bit to the right,” said Air Force Chief of Staff Gen. Charles “CQ” Brown Jr.

“Our focus and commitment to the T-7 has not waned,” he said during a June hearing before the House Armed Services Committee. “We’re just making sure that the money aligns with where the program is.”

Speaking in September during the Defense News Conference, Brown characterized the delay as a “slight slip” and said it was nothing he would consider dramatic.

“There are some areas as we were going through some of the testing that we found a couple things,” he said. “That’s somewhat typical as you work new airplanes and bring them into the system, and what we did was delay a little bit of money just based on some of the testing results that we have to continue to work through.”

“We saw an anomaly in the data,” he said during a briefing with reporters in September at the Air Force Association’s annual conference. “We had this wing rock at 25/26 degrees angle of attack — so the left and right wing gently rock back and forth.”

Brown, speaking during a media roundtable at the confab, said the service and Boeing were addressing the issue.

“We’re working … with them to solve this together and do it at an affordable price,” he said. “I haven’t seen anything to give me the indication it’s going to go beyond the slight delay.”

Niewald told reporters later that the issue has now been resolved and the fix required no hardware changes. He touted the benefits of digital engineering in helping to solve the issue.

“We went and fixed it before the first [engineering and manufacturing development] aircraft ever flies,” he said. “That shows how we’ve been able to use digital engineering to know where those uncertainties lie.”

Meanwhile, another issue that has also dogged many Defense Department programs has been the impact of COVID-19 on supply chains, he said. That has included shutdowns, quarantines, travel restrictions and delays to shipments of resources.

“For a brand-new supply chain, [that caused] a lot of disruptions,” Niewald said. However, Boeing engineers are working to mitigate the delays.

“[Our team is] fighting through that,” he said. “We’ve had some parts delayed five to seven months, but this team is prying back that time.”

However, the problem has not been solved, Niewald said. “The pandemic is not over, so we continue to see disruption.”

Speaking to National Defense, Niewald said the wing-rock issue was not the primary driver for pushing back the Milestone C decision.

“What’s driving the program schedule is the build and the COVID impacts that we’ve had on our supply chain,” he said. “We’re not using that as an excuse, but that is the reason that things have moved and shifted.”

Speaking to reporters in front of a television screen with a live look at Boeing’s T-7A factory floor, Niewald noted that the aircraft features a simple design that was crafted with maintainers in mind.

“You can see how many people we have working on the jet itself — we just have a couple people,” he told reporters. Journalists observed what appeared to be a socially distanced factory line with only a few employees visible.

Mechanics utilize tablets with model-based instructions, he said. The tablets have all the information they need so they don’t have to go back and forth to look up information.

“If they need torque values for fasteners, it’s all contained within the instructions,” he said. “It saves a lot of time.”

The company has also conducted flutter, noise and vibration measurements on the T-7A. The aircraft has conducted inverted flight testing as well as engine air-start testing.

“We’ve turned off the engine and restarted it in the air, all to show and prove out … rapid learning as we go,” Niewald said.

The company has also conducted structural, static and escape system testing, he added.

Moving forward, the Air Force plans to accept delivery of five engineering and manufacturing development test aircraft and ground training devices, according to budget documents. Development, test and evaluation efforts for the program will continue throughout fiscal year 2022.

Boeing plans to fly the first EMD jet by the end of the year, Niewald said.

“According to program officials, the emergency escape system’s risk is driven by the canopy fracturing system and ejection seat qualification, including the certification of the seat’s ability to safely accommodate the pilots’ various physical attributes upon ejection, along with increased safety requirements,” the report said. “The program is executing a qualification test plan to confirm the seat design satisfies requirements.”

As for the visual display projector, the system the Air Force planned to use did not successfully meet visual acuity requirements during developmental testing, the report said.

Meanwhile, in a report last year, the Teal Group, a Fairfax, Virginia-based defense and aerospace market analysis firm, said the T-7A is arguably the safest new-start airplane program on record for two reasons.

“One, with half-century-old T-38s falling out of the sky, a replacement is clearly late and needed,” said the report, which was written by Richard Aboulafia, the organization’s vice president of analysis. “Two, Boeing has agreed to absorb all risk, and even some of the baseline cost. They will likely lose money on most, if not all, of the 351 baseline program aircraft, and possibly even on the additional 124 option planes covered in the contract. … This raises the question of how Boeing might profit from other requirements.”

One way may be through the Navy’s planned program to replace its T-45 trainer, the report said. However, it is unclear if the sea service would need a supersonic aircraft or would even be able to adapt an Air Force trainer for carrier use.

“On the positive side, the T-7 has a General Electric F404 engine, and the U.S. Navy has a substantial F404/F414 engine depot and support capability in the service due to its F/A-18 fleet,” the document said.

Additionally, there is likely a small export market available for the T-7A, it noted.

“Most export countries do not use supersonic trainer designs, largely for cost reasons,” the report said. “It’s difficult to imagine a market for more than 100, and probably fewer, export T-7 trainer models.”

However, it is likely that Sweden will purchase 15 to 20 of the Red Hawks, the report added.

“All told, between service and upgrade contracts, exports of all kinds, and the prospect of a naval T-7, this program might eventually allow Boeing to turn a profit,” the report said. “There are no guarantees of this, but on the positive side, the program helps keep St. Louis [where Boeing has production facilities] alive as a fast jet production center, which matters, as there will be a new generation of fighters to bid for by the 2030s.”

Niewald said the T-7A is built for growth and the company has received interest from domestic and international customers.

“Make no mistake, we’re focused on the Air Force EMD program right now. But that said, we do have studies going on as to what … this can be,” he said. Niewald noted that the company has responded to a request for information from the Navy for its trainer.

Aboulafia, speaking to National Defense, noted that while the T-7A is widely looked at as a solid aircraft, he believes Boeing’s contract and bid were not realistic. The program is structured as a firm-fixed price contract, which means Boeing will have to absorb cost overruns much like its tanker counterpart — the KC-46A — which this year reached $5 billion in excess costs that Boeing has had to eat.

“$9.7 billion was just not realistic, but it’s fixed price,” he said. “That’s a recipe for under-resourcing and trouble ahead.”

According to the Congressional Research Service, the Air Force had originally valued the contract at roughly $19.7 billion.

While Aboulafia doubts the program will end up being a “tanker story” — a reference to the problems the KC-46 project has faced — there likely will be some issues moving forward. “The big issue is just going to be the expense associated with the flight test program,” he said.

Additionally, Aboulafia flagged growing inflation as a potential pitfall for the program.

“You’re seeing inflation, particularly for technical personnel” increasing, he said. “There’s a whole bunch of factors at play with inflation. But obviously inflation makes that under-resourcing question that much more difficult and interesting.”