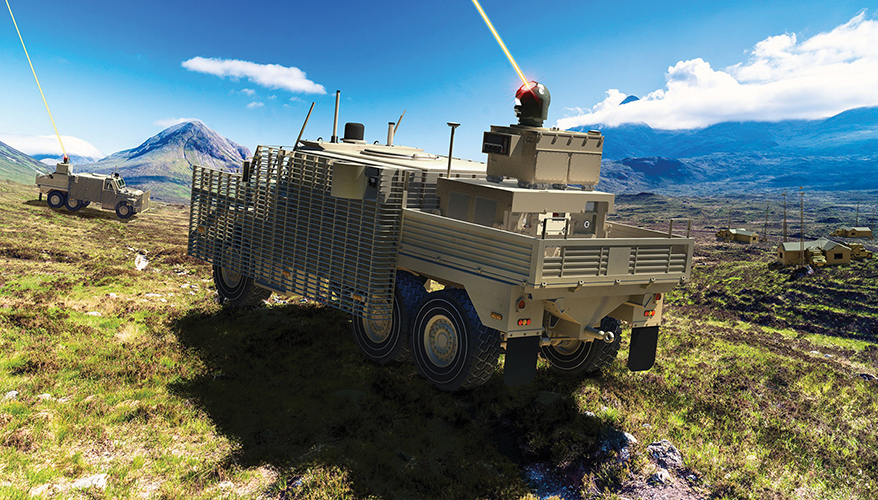 Illustration of HELWS attached to a Wolfhound

LONDON – The United Kingdom is the latest military to test a new directed energy weapon developed by Raytheon Technologies to destroy rogue drones.

Raytheon will attach its high-energy laser weapon system, or HELWS, to one of the British army’s tactical support vehicles – the Wolfhound – for a six-month experimentation period to demonstrate its ability to take out unmanned systems. The armed forces need greater strength and accuracy to face the growing threat of cheap, highly customized unmanned aerial systems, said Jason Nelsen, senior regional director of Europe and the Americas at Raytheon Intelligence and Space.

Nelsen compared the situation to the scourge of improvised explosive devices that the U.S. Army and coalition forces had to reckon with during the wars in Afghanistan and Iraq.

It’s “an analogous problem,” he said on the sidelines of the Defence and Security Equipment International conference in London in September. Both IEDs and drones are inexpensive to procure, but costly to defeat.

The laser uses a multi-spectral targeting system, which is the same capability employed for millions of hours on platforms such as the C-130 Hercules aircraft and MH-60 helicopter, Nelsen said. The weapon’s “secret sauce” for enabling accuracy is embedding a laser in an electro-optical and infrared sensor, or EO-IR.

“When you’re trying to take out a UAS, you need to be very precise,” he said. “It would be like a laser pointer — if you’re trying to focus on a presentation, and it’s all over the place, all that power is moving around … [and] it’s not effective.”

The operator can rely on the laser’s radar to lock onto a target and then confirm it is accurate using visuals provided by the EO-IR sensor. A human will make the final decision before striking the target, he added.

The operator can also create a “no-fly zone” for the laser to prevent any accidental weapons discharge in predetermined directions, he noted.

The high-energy laser system has been attached to other platforms for testing in the United States. For example, the Air Force Research Laboratory spent more than $13 million on Raytheon’s demonstrators in 2019.

Over the next four years, the United Kingdom plans to invest nearly $9 million in research and development for these types of capabilities across its armed forces.

“Directed energy weapons are a key element of our future equipment programs and we intend to become a world-leader in the research, manufacture and implementation of this next-generation technology,” Jeremy Quin, minister for defence procurement, said in a statement.

Energy Efficiency Is a Warfighting Imperative