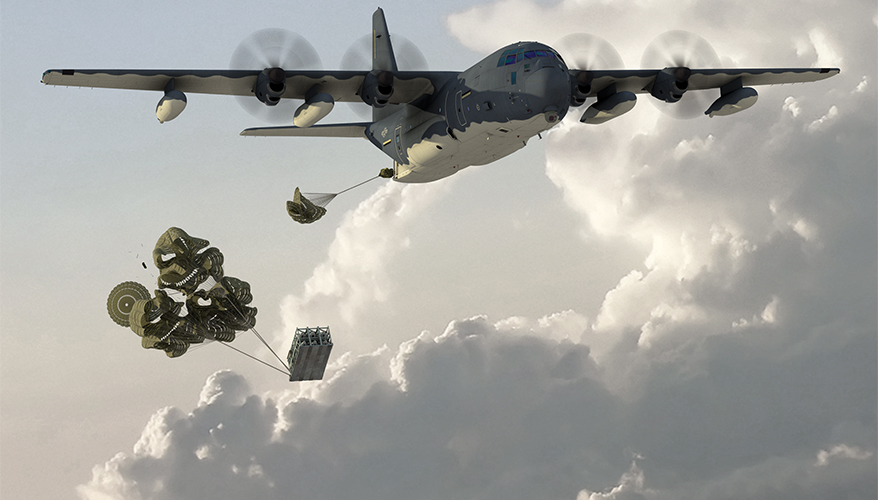 The Air Force is planning a live-fire demonstration before the end of the year that could transform C-17 and C-130 airlifters into strike aircraft.

During the experiment, called the Rapid Dragon campaign, the rear cargo door of a C-17 will open for a high-altitude air drop of a large roll-on/roll-off pallet loaded with munitions, according to the service’s strategic development planning and experimentation office.

Dean Evans, Rapid Dragon program director at the office, described the platform as a standalone palletized weapons system and a smart, reconfigurable modular box able to launch varying numbers and types of munitions.

The office went from a conceptual design to test in just 10 months, he said. The testing is part of a fast-paced, 24-month experimentation budgeted at $23.7 million.

Munitions could include the extended range version of Lockheed Martin’s 2,000-pound Joint Air-to-Surface Standoff Missile Extended Range (JASSM-ER), which would receive targeting data from a beyond-line-of-sight command-and-control node via an aircraft-agnostic battle management system incorporated into the pallet.

The data is uploaded to the missiles, then cleared for release. The pallet rolls out the back, dropping by parachute at a safe distance from the C-17, stabilizes and then automatically fires up to 32 JASSM-ERs or other munitions at a target hundreds of miles away.

In July, the Air Force successfully simulated the scenario during test flights at White Sands Missile Range, New Mexico, with a Special Operations Command EC-130SJ and a C-17A from the 418th Flight Test Squadron. Later this year, they will do a live-fire test using JASSM-ERs from an EC-130SJ.

The box can be enlarged or diminished in size, “like stacking Lego blocks,” depending on how many weapons are desired and what type of airlift aircraft will drop it, Evans said.

The office and the test community are currently working on a six-JASSM-ER configuration for the C-130 and a nine-JASSM-ER arrangement for the C-17 with the goal of expanding the number of munitions that can be employed from the modular box.

The campaign chose to test with the JASSM-ER first because of its large size and complexity. “If we can make JASSM work, making anything else work in the future should be easier,” Evans said.

The weapons will be fired in a nose-down direction from the box, Evans noted. Getting the missiles to “pull up,” or correct their trajectory once fired, is the most daunting technical challenge, he said. The campaign is “right on track to demonstrate unconventional release” in a flight test preceding the live-fire test, he added.

Testing with other munitions will be carried out in the next phase of Rapid Dragon in 2022 and 2023 with similar simulations leading to live-fire testing, demonstrating that the box is weapons agnostic and capable of firing kinetic and non-kinetic weapons, he said.

So far, the project hasn’t defined how the palletized weapons system will be commanded and controlled. But in a podcast with the Mitchell Institute for Aerospace Studies last March, Air Mobility Command Commander Gen. Jacqueline Van Ovost indicated that Air Force Global Strike Command might be responsible.

Van Ovost asked, “How do you inform and have Global Strike [Command] manage that? We’re just a platform. Instead of dropping [munitions] on a ramp somewhere at some island, we’re just dropping them in the sky. And after they drop out of the sky, someone else lights them off and takes them to the target.”

When and if the Air Force decides to proceed with the capability isn’t known, but Evans emphasized that the campaign was breaking new ground in how the service arrives at a new capability — by engaging major commands and the testing community from inception.

“That’s why we’ve been able to move so fast and increased the probability that this won’t be lost in the Valley of Death,” he said, referring to the inability of some projects to transition into acquisition programs of record.

Re: Air Force to Launch Munitions from C-17s

Some of the old concepts should have been built, such as the 747-800 "Cruise Missile Aircraft Carrier" that can do this on a much larger scale.

The idea of using Cruise Missile pallets inside cargo planes is a good idea, but what the USAF is really saying is that it needs more bombers to drop cruise missiles. Distributed Lethality and spreading out the force with cargo planes will work, but I can't envision these C-130s and C-17s flying on such a mission solo without fighter escorts with a cargo of precious and expensive cruise missiles inside.

Another point is that if this concept becomes a reality, then it's vitally important that the DoD maintains functional fighters, be they stealth or conventional, to escort all these cargo planes with cruise missiles inside.

That is why DoD programs such as the F-18 Block III, F-35, USAF NGAD fighter, and USAF F-15EX are vital to National Security. Even new 4+ Generation fighters are required to escort these cruise missile laden cargo planes. The F-16 Replacement is also vital too because if peer nation war breaks out and cargo planes get stuffed with cruise missiles inside, the DoD better make sure that they fly into battle escorted by fighters that work and can protect these huge lumbering planes. That is why "Don't put all your eggs in one fighter basket" makes sense because if engine malfunction problems grounds the entire F-35 fleet, then at least the F-18s and F-15EXs and F-16 Replacements can get into the air to perform escort duty.

What's old is new again... Dropping palletized weapons from transport planes is nothing new... BLU-82 Daisy Cutters or FAEs dropped from C-130s back in Viet Nam, and I'm sure they predate that...

Former Weekend Warrior at 1:45 PM
Re: Air Force to Launch Munitions from C-17s

Harold Scheffler at 12:50 PM
Re: Air Force to Launch Munitions from C-17s

No doubt this abortion of weapons delivery came from the architects of our outstanding Afghanistan withdrawal.
BTW, I flew C-130s…..

Cart before the horse. So the USAF has enough SURPLUS/LOW-TIME airlifters to just loan them out?.... Right!!

So, in terms of advanced weaponry, China is testing hypersonic missiles while the US is dropping pallets from trash haulers. Wow!

Steve Kratochvil at 12:37 PM
Re: Air Force to Launch Munitions from C-17s

Could be worse, they might be launched from a $4 billion submarine.