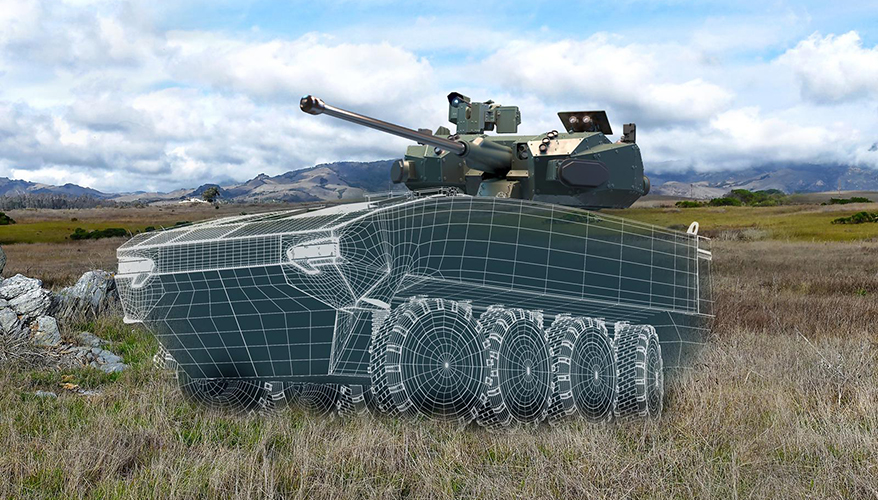 The turret was designed using an open architecture platform that allows for various integrations and upgrades to be made depending on customer requirements.

“When you take a simple vehicle and you put a weapon station on it, it becomes a combat machine. Once it’s a combat machine, you want to add other things — better protection, more firepower, communications, information,” Lurie said. “Once you start adding things on, it gets complicated.”

Rafael made its own modifications with its own technologies, he said. He explained that the Samson RWS is fully collaborative with the company’s Trophy Active Protection System, which deploys projectiles to neutralize incoming threats before they hit a vehicle. Samson can also be integrated with Spike-LR 1 and Spike-LR 2 multi-purpose guided missiles and the Spike Firefly, a miniature loitering munition drone.

The Samson 30mm is related to Rafael’s medium caliber weapon system that was a key component of Oshkosh Defense’s $942.9M contract to bolster the artillery of the Stryker infantry carrier vehicle, according to a Rafael press release.

"We’re looking at ... at something that will evolve,” he said.

In addition, the system is equipped with a unified user interface for all subsystems, an inherent hatch for close-proximity situational awareness, and under-armor ammunition that boosts a vehicle’s lethality. All of this combined enables the turret to transform a light vehicle into a mobile weapon comparable to a battle tank, according to the company.

Update: This story has been updated to include information regarding Oshkosh Defense's contract.

It is interesting how weapon systems improve and evolve, but there is also some consternation about who makes these systems. Foreign systems seem to be eclipsing the US ones in terms of capabilities and innovation, and that could be a problem because the weapon capabilities are rapidly advancing. US turrets often do not introduce ATGMs and Active-Defense as some of those are add-ons and the US doesn't believe that LAVs should be tank killers.

So if the US is dependent on foreign designs, manufacturer, and sales, how would that affect our Defense industrial and engineering base? If foreign countries make better systems and designs than the US and UK, would that mean that the same designs and systems can be exported to non-allied nations also?

Also of consternation is the fear that these foreign nations might "breakaway" and start their own pursuit of national interests and corporate pursuits. That is how WW1 and WW2 started with those nations using their own military designs to conquer the world. That is how the Marvel's IRON MAN movies started with Stark Industries selling advanced weapons to the world, or BATMAN where Wayne Enterprises designs its own weapons and vehicles for the rogue vigilante superhero to use. As long as that nation is allied to the West, then that is fine, but the compromise in security cannot be ignored if this nation starts selling its better weapons to the highest bidder or other nations and government militaries do not have the best weapon systems anymore.

Processes of Acquisition, quality, and requirements have got to change. If a nation is known of design lemon dud weapons systems, then by all means DoD will buy weapons systems from overseas for less that actually do work right out of the box.