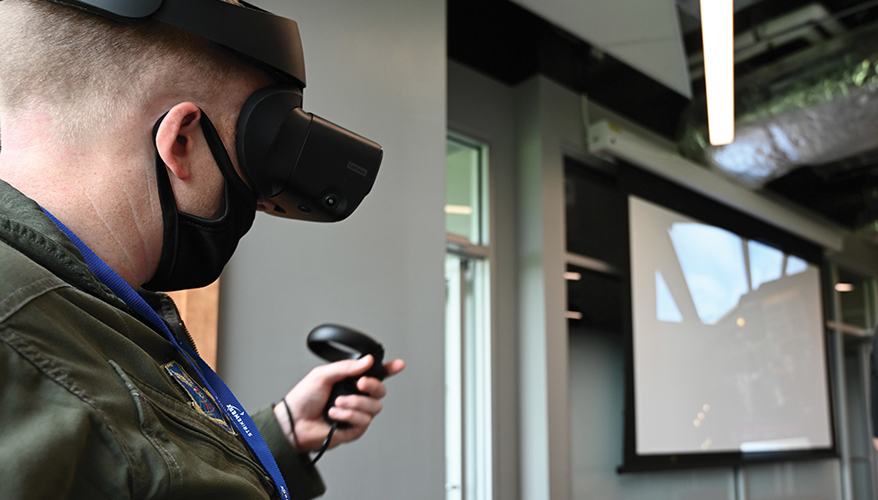 An airman practices with the Virtual Reality Program Trainer at StrikeWerx.

Following in the footsteps of other military agencies and offices, Air Force Global Strike Command is reaching out to nontraditional industry partners with the launch of a new innovation hub.

The command — which is tasked with operating the Air Force’s bomber fleet, intercontinental ballistic missiles and nuclear command, control and communications systems — set up a new facility called STRIKEWERX in May to connect with academia, small businesses and even “garage inventors,” said Donna Senft, the command’s chief scientist.

“We call it our storefront,” she said in an interview. “It is a facility that enables anyone to come in who wants to work with us and they can bring us their good ideas.”

While the focus of STRIKEWERX is on expanding the command’s innovation base, the door is also open to traditional defense contractors and large businesses, she noted.

“Sometimes within the large businesses we have people who are investing in new ideas through internal research and development and they’re eager to talk to us,” she said. “Any of those types of people, we’re happy to talk to them and connect and hear more.”

The STRIKEWERX facility is located outside of Barksdale Air Force Base, Louisiana, where Global Strike Command is headquartered. The hub was strategically placed off-base to avoid difficulties for those looking to meet with the command, Senft said.

“It can be a little bit hard sometimes for some of our partners to get through the gate,” she said. “Sometimes they don’t know anybody in particular within the command to work with, and so now we have a facility that’s located off-base where they can just walk in the door and talk to our people there and say, ‘I have a great idea. I think you would be interested in it.’”

The effort is modeled after AFWERX, an Air Force initiative that was set up in 2017 to boost the service’s engagement with industry, academia and nontraditional partners while developing much-needed capabilities more quickly and flexibly. AFWERX now has locations in Austin, Texas, Las Vegas and Washington, D.C.

Global Strike Command hopes its new hub will aid in facilitating a cooperative “ecosystem” where its particular needs can be addressed.

The command is looking to harvest the “great technologies out there and bring them inside Global Strike Command to solve our needs,” she said.

The STRIKEWERX facility was slated to open in April. However, the ongoing COVID-19 pandemic forced the command to push its grand opening to May. The organization has since hosted multiple “open houses” where small groups of interested parties registered ahead of time to attend both in person and virtually, Senft said.

“These days it can be a little bit more difficult to travel to the Shreveport–Bossier City, Louisiana, area and walk in the door. But we have a virtual presence online,” Senft said.

“We all along had the idea that … STRIKEWERX would have a virtual presence.”

Moving forward, the hub will be home to events, workshops, meetings and industry challenges to find technology to fill the command’s operational gaps. One area STRIKEWERX is already working to address is electromagnetic pulse hardening, Senft said. An electromagnetic pulse, or EMP, is an intense burst of energy that can be released by a nuclear weapon detonated high in the atmosphere, or by a geomagnetic disturbance caused by natural phenomena such as solar flares.

In 2019, President Donald Trump released the “Executive Order on Coordinating National Resilience to Electromagnetic Pulses,” which called for the nation to reduce its vulnerability to such attacks.

“The federal government must foster sustainable, efficient and cost-effective approaches to improving the nation’s resilience to the effects of EMPs,” the order said.

Global Strike Command is facing the same EMP issues and vulnerabilities as the rest of the nation, Senft said. “We’re interested in good ideas across the country that could help us more cheaply and more effectively harden some of our equipment.”

STRIKEWERX will soon open its doors to industry for a challenge to get after EMP hardening. Invited members of industry will be able to bring their designs, “so it’s more of a problem-solving interaction,” she said.

Innovators that don’t receive an invitation to participate in the challenge won’t be shut out of the facility.

“For companies that haven’t been invited and they have great ideas, they can go to our website and interact with us or walk in the front door,” Senft said.

Another topic of interest for STRIKEWERX is chemical, biological, radiological and nuclear defense, or CBRN.

The innovation center will host a CBRN virtual event in September in partnership with SOFWERX, an initiative founded in 2016 to facilitate cooperation with industry partners and Special Operations Command. The event will include a technology assessment to identify capabilities that could aid in the development of a next-generation CBRN mask.

Focus areas for the effort include reducing user burden, interoperability and an enhanced face seal.

During the event, individuals will be allotted one-on-one virtual sessions with SOCOM to pitch or demonstrate their solutions.

Meanwhile, the hub has helped Global Strike Command discover a number of local businesses in the surrounding area that may be able to address its problem sets.

“People don’t think of Shreveport, Louisiana, as a hotbed of technology activities normally,” Senft noted. “But we’re finding out there are some great companies that we want to work with that we didn’t know about before. So it has already paid off.”

In the future, the hub will have a topics list to compare proposals presented by companies and members of industry to the command’s needs for compatibility purposes. At this point, the command does not plan to release its future needs list to the public, Senft said.

The STRIKEWERK facility will also be a place for airmen’s “ideas to become reality,” according to the command. It will give servicemembers access to experts, acquisition coaching, and engineering and technical support.

Andrew Hunter, director of the Defense-Industrial Initiatives Group at the Center for Strategic and International Studies, a Washington, D.C.-based think tank, said smaller scale Pentagon efforts to reach out to industry, such as STRIKEWERX, have shown to be effective.

“What we’ve seen today have been pretty discreet efforts to tackle clear problems … that really lend themselves to being solved with innovative software,” he said. “These organizations have proven a lot of utility in doing that and in doing it with a mixture of military folks with real coding skills themselves working on the problem, but also getting innovative solutions from industry and being able to combine those two capabilities.”

There have been signs of success, said Hunter who previously led the Pentagon’s Joint Rapid Acquisition Cell.

“Initially what we heard is: ‘We just don’t know how to get access. We don’t know how to find out what the military needs. We can’t get through the contracting process,’” he said. That now seems to be changing in a positive way with the creation of organizations such as AFWERX, the Defense Innovation Unit and others.

The Defense Innovation Unit, also known as DIU, set up its headquarters in Silicon Valley in 2015 to try to help bridge the divide between the military and commercial tech hubs. It has since opened additional offices in Austin and Boston.

Through such initiatives, companies have been able to gain insights about the military’s requirements, how their products could be applicable, receive initial contracts and begin working with the Defense Department, Hunter said.

“There’s a lot of success in the fact that some of those problems that industry has long complained about — I wouldn’t say they’ve been totally solved forever — but a lot of progress has been made in solving them,” he said.

What many companies now struggle with is crossing over the Pentagon’s dreaded “Valley of Death” from the initial exploratory prototyping phase of a program to implementing their solutions and products on a larger scale across the military, he noted.

“It’s still proving challenging to get the follow-on contracts to those initial contracts,” he said.

One key piece of the equation for initiatives like STRIKEWERX to see positive results boils down to the hub’s business models for industry, Hunter said.

“One of my things that I’ve been focused on a lot lately is thinking about the business model for some of these innovative, especially software-oriented solutions, which is: How does the contractor profit in the near term and the long term?” he said. “Where does that profit incentive come to constantly innovate? Which is what we’re kind of asking industry to do.”