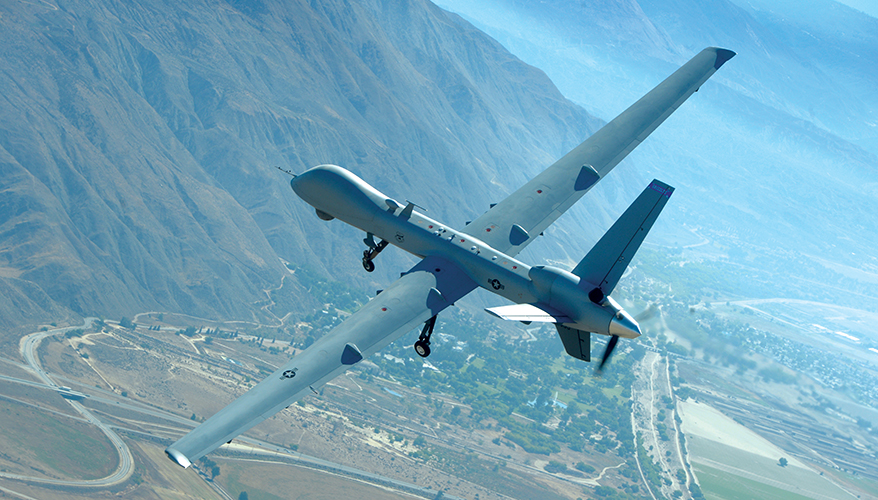 The General Atomics-built MQ-9 Reaper — a medium-altitude, long-endurance unmanned aerial vehicle with millions of hours of operation under its belt — has had a ubiquitous presence over battlefields in the Middle East. But with the Pentagon preparing for future fights in contested, non-permissive environments against peer adversaries, the service is beginning its search for the aircraft’s replacement.

The Reaper — which is larger and carries more payload than its predecessor the MQ-1 Predator — provides the military with a “hunter-killer” capability by executing both strike and intelligence, surveillance and reconnaissance collection functions. But officials say it is time for a new platform that can take on those same missions and more.

The service signaled its intent in President Donald Trump’s fiscal year 2021 budget request by zeroing out its proposed buys of MQ-9s as it pursues a follow-on aircraft, though legislators may push back on the move.

“We made the pivot to divest MQ-9s to pivot into high-end warfighting,” said Will Roper, assistant secretary of the Air Force for acquisition, technology and logistics, during a press briefing in July. The service is now pursuing a replacement system dubbed the MQ-Next.

The move to acquire a new platform — the second such effort for the Air Force following a canceled program known as MQ-X in 2012 — comes as the Pentagon shifts to great power competition with advanced adversaries Russia and China, as outlined in the 2018 National Defense Strategy.

In June, the Air Force released a request for information to industry seeking input about a new medium-altitude drone, with particular focus on innovative development and business practices, and digital engineering initiatives. Responses were due in late July and a number of major defense companies responded.

Affordability and versatility will be key as the Air Force looks for the Reaper’s replacement, Roper noted.

“We’re going to have to explore more than just the MQ-9 mission or else we’re not going to be able to create enough of an asset within the Air Force budget itself to afford to pursue the program,” he said. “If all we do is replace the MQ-9 mission, we really generated a bill for the Air Force.”

The Department of the Air Force has a number of expensive programs on its shopping list as it pursues an ambitious modernization strategy that includes fifth-generation fighters, a new nuclear-capable stealth bomber and ground-based strategic deterrent, space systems superiority and joint all-domain command and control.

If the new drone is “another mouth to feed and it’s not helping us with high-end warfighting, then it’s not likely to be first in the queue,” he said.

Using a baseball analogy, Roper said he wants to see the replacement platform be a true utility player. He envisions a future where the aircraft could go from collecting ISR data to being weaponized to conduct air-to-air operations.

“Can I have a drone that I can put forward in a high-end fight that can provide a picket line that makes it difficult for enemy fighters to push through?” he asked. “Can I pull that drone back to the rear and have it protect high-value assets, aircraft and even bases?”

Because the Air Force is looking for a UAS that can perform a variety of missions, it may need to pursue more than one aircraft, Roper said.

“I’m open to families of systems,” he said. The service wants industry to think outside-of-the box about how the Air Force can conduct high-end warfighting against a peer adversary.

Increased automation is one solution, which will also help with affordability, Roper noted.

“It takes a ton of people to operate even one MQ-9,” he said. “That’s not a knock against the platform — it was designed at a different point in technology. And now many of the things we have people do, we can automate.”

The service intends to have airmen in the loop for critical decisions — especially lethal ones — and will not delegate that to machines, he said. But it wants to simplify how users interact with the next-generation drone.

“We have to automate as much as possible if we’re going to keep the platform affordable,” he said.

Technology such as artificial intelligence can assist with automation and reduce operating costs, he added.

“We can really drop the cost per hour of ISR … if algorithms are doing most of the triaging of the raw video and only sending back to remote operators objects that are of interest,” Roper said during a Mitchell Institute for Aerospace Studies event.

Additionally, in regions such as Central Command and Africa Command there is a possibility that the service could reduce the number of airmen that have to operate the MQ-Next platform if AI and new commercial technology is adopted.

Meanwhile, survivability and expendability will be important considerations for the program.

“I imagine being in industry shoes. I would either try to have something that is so cheap that I can proliferate it broadly — and that comes with a logistics challenge for us — or something that is reasonably defendable enough so that if I’m an adversary, I have to truly commit capital assets to take it out,” he said.

Moving to an architecture that supports expendable aircraft will not be easy, he noted.

“We have been able amazingly to build airplanes that we expect to return every single time they take off,” he said. “You can imagine designing things that may not return is a complete culture shift for us and for industry.”

Based on informal engagements he has had with companies, Roper said he expected to see a great deal of creativity in industry responses to the RFI.

The service is aiming for initial delivery beginning in 2030, and initial operational capability by 2031, according to the RFI.

“In a digitally engineered future, 10 years is an eternity. I would hope we could spiral multiple times within that 10 years,” Roper said. If “we can’t get it done by 2030 then something is wrong with our system. Ten years should never be the time you take for development except for extremely exceptional things.”

General Atomics is responding to the RFI and plans to leverage its experience with the MQ-9 as it pursues the effort, according to a company spokesperson.

“The technology advancements we propose will leverage open architecture, artificial intelligence, autonomy, modularity and interoperability to maximize both system effectiveness and service investments,” the spokesperson said. “We believe our technology advancements offer lower lifecycle cost and provide warfighters with enhanced unmanned capabilities that enable commonality and joint interoperability on the battlefield.”

The company is embracing the possibility of a family of systems for the program, the spokesperson noted. It is planning to leverage more automation in future platforms and is already integrating such technology on the MQ-9.

“This includes automatic take-off, landing and remote taxi, and a portable aircraft control system for aircraft launch and recovery that eliminates the need for forward-deployed launch/recovery crews,” they said. “We also developed a single-seat ground control station and have a multi-mission control capability that lets a single pilot control up to six MQ-9s.”

If the Air Force were to use all of these automation tools on the Reaper, the spokesperson projected that it could reduce the service’s manpower bill by 50 percent and free up 1,500 aircrew billets “that could be applied towards expanded MQ-9 mission capability, reallocated to other priority personnel requirements, or eliminated to realize multi-billion dollar savings over the remainder of the MQ-9 service life.”

In a statement, a Lockheed Martin spokesperson said the company intended to respond to the RFI and would leverage work done by its advanced development program division, Skunk Works, which has expertise in developing unmanned platforms.

Boeing and Northrop Grumman said they plan to pursue the program but declined to provide specific details on their RFI submissions.

MQ-Next will be an important program for General Atomics because the MQ-9 is its bread and butter, said Phil Finnegan, director of corporate analysis at the Teal Group, a Fairfax, Virginia-based aerospace and defense market analysis firm.

“They’re going to fight hard to try to build a replacement,” he said. The company would be in a difficult position if it lost the competition because it brings in a lot of revenue from the Reaper.

However, Larry Dickerson, a senior defense analyst at Forecast International, a Newtown, Connecticut-based marketing consulting firm, noted that it wouldn’t be all doom and gloom for General Atomics if it loses the MQ-Next competition.

Meanwhile, while the Air Force is gung-ho about pursuing a replacement for the MQ-9, some in Congress appear to be less so. In the House fiscal year 2021 defense appropriations bill — which was passed by the chamber in late July — lawmakers included funding for 16 MQ-9s at a cost of $344 million that would keep its production line going, according to a summary of the legislation. As of press time, a final appropriations bill had yet to be passed.

“The Air Force’s fiscal year 2021 budget request proposes to terminate production of MQ-9 aircraft, citing an excess of aircraft compared to projected operational requirements,” said the House Appropriations defense subcommittee in its version of the spending bill. “The committee does not accept this proposal and recommends additional funding for 16 MQ-9 aircraft.”

Lawmakers said they were concerned that the Air Force reached its decision without adequate planning for a follow-on system. The committee directed the service to submit a report about an MQ-9 follow-on program to congressional defense committees before the fiscal year 2022 budget request.

“The report shall detail the desired features of such a system, the cost and timeline required to achieve development and fielding, proposed measures to ensure full and open competition, and an explanation of how such a system would fulfill the goals of the National Defense Strategy,” the bill said.

Roper noted that the Air Force will need to convince the Hill about the usefulness of a new platform.

“Building a utility player that can meet multiple mission demands is not something that our acquisition system has historically been good at,” he said. “We’ve got to get good quickly to convince Congress that this is a good pivot, and I look forward to having those discussions.”

Finnegan noted that lawmakers’ reluctance to shut down the MQ-9 production line could be a hurdle for the MQ-Next program.

“If there’s one thing Congress doesn’t like, it’s shutting down production lines. And trying to kill a program is extremely difficult,” he said. “We’re already seeing that.”

Meanwhile, in July the Trump administration announced that it was loosening some UAS export rules associated with the Missile Technology Control Regime, which could have impacts on both the Reaper and the MQ-Next programs. The adjustment would affect “Category 1” systems that have a maximum airspeed of less than 800 kilometers per hour.

The new policy is expected to increase trade opportunities for U.S. companies, according to analysts.

For General Atomics, the loosening of rules could drum up new business abroad for the MQ-9 but there are still some hurdles, Dickerson said.

How the MTCR changes will affect sales of a future MQ-Next platform is still up in the air, he noted.

“It depends on the type of system they select,” he said. “The U.S. will not want to sell this system to everyone.”