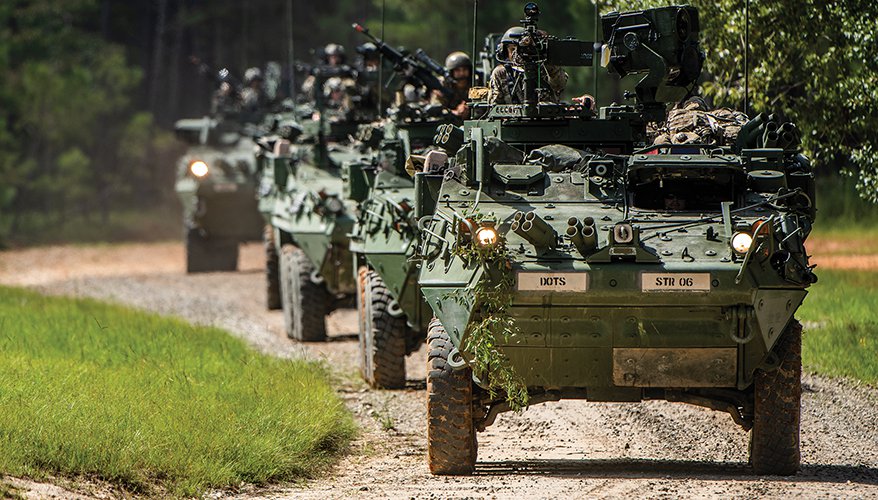 Army photo by Patrick A. Albright

Once identified by Army planners as an “interim armored vehicle” and later a “medium armored vehicle” capability, the transformative vision behind the Stryker Family of Vehicles has proven itself in global operations over nearly three decades.

The latest milestone occurred in June when the Army began fielding the third generation of Stryker vehicle platforms at Fort Carson, Colorado.

“The Stryker program is healthy,” offers Col. William Venable, Army project manager for the Stryker Brigade Combat Team. “It’s a good time to be in the Stryker business. Stryker is one of the key platforms that are part of the Army’s overall modernization strategy and, as such, we’ve had several key decisions in the past that are modernizing our various platform capabilities and examining modernizing future capabilities.”

The first generation of Strykers fielded to the U.S. Army were a “flat bottom” design. Based on combat experiences and other lessons learned, the hull was modified to a “Double-V Hull” configuration with the second generation DVH Strykers beginning to enter Army inventories around 2009.

The third-generation systems reflected in the Fort Carson milestone fielding event noted above are designated as DVHA1.

“The DVHA1 offers substantial improvements in mobility, power and network interoperability,” Venable explained. “It has got a larger horsepower engine and improvements in suspension and larger tires, giving it greater ground mobility. It has got a much larger alternator for power generation. And it’s the first vehicle that has a built-in and integrated vehicle network that will make us fully compatible with the Army’s future Integrated Tactical Network.”

Asked about the status of the ongoing fielding of the initial DVHA1 vehicles to 2nd Brigade, 4th Infantry Division, he continued, “I have to say that the [office of the assistant secretary of the Army for acquisition, logistics and technology] chain of command, our industry partners, General Dynamics Land Systems, and others, as well as our team, did an incredible job starting off that fielding with 2-4 Infantry at Fort Carson, right on time. And that was in the middle of the pandemic. But they deployed a workforce there, kept them safe, and got all the vehicles delivered.”

As of early September, he estimated that approximately half of the brigade’s new DVHA1 platforms had been fielded to the unit.

In addition to fielding within the teams, Venable noted that the Army currently has several hundred Stryker-based NBC Reconnaissance Vehicles fielded to non-Stryker brigades.

One element within the teams that could soon change involves the Mobile Gun System.

“That particular system is a story unto its own in terms of its development and fielding history,” Venable asserted. “And there is an upcoming decision in November to determine the future of that particular MGS on flat bottom vehicles.”

While one decision option could integrate the gun onto a DVHA1 chassis, Venable acknowledged that “the greater community of purpose is re-examining the requirement to try to better understand what we were trying to solve with that particular vehicle. … There’s quite a lot of conversation with various courses of action going around.”

He pointed to ongoing Stryker lethality upgrade activities as potentially providing “overlapping capabilities against the original set of requirements for” the Mobile Gun Systems, adding, “So it’s possible that in that re-examination, the Army could select another type of capability besides the direct fire 105mm cannon.”

One of the initial lethality upgrade activities that has taken place within the Stryker Family of Vehicles focused on the Army’s 2nd Cavalry Regiment, which submitted an operational need statement in March 2015 calling for the modification of 83 Infantry Carrier Vehicles into a “Dragoon” configuration that included the installation of a 30x173mm XM813 cannon in a Kongsberg MCT-30 turret. (See story on page 30)

After studying initial lessons learned with the Dragoons, the Army sought to expand Stryker lethality across a greater percentage of the fleet. One result was the February 2019 release of a request for information to determine the industry capabilities to produce and integrate a medium caliber weapon system, using an XM813, onto a Stryker DVHA1.

Subsequent industry responses and early programmatic milestones led to the May 2019 award of multiple design integration study contracts for the Stryker Medium Caliber Weapon System lethality program, with the Army currently authorized to procure the upgrade for three of its combat teams.

Six teams initially were awarded development contracts under phase 1, with reports that some of the competitors subsequently decided to leave the program effort.

Venable said that while he was prohibited from disclosing the number of competitors that actually entered the source selection phase of the effort, “It is a healthy competition and I’m very happy with it.”

Current schedules reflect continued testing to inform source selection through the end of 2020, followed by a few months of evaluation prior to contract award in late March or early April 2021.

Acknowledging that the original Dragoon program upgrades were accomplished at Anniston Army Depot, Alabama, Venable said that the specific location for this next effort remains to be determined.

However, the program represents just one element of a broader set of enhanced lethality capabilities.

“We also are upgrading the anti-tank guided missile system, the TOW missile system, and we’re putting the Javelin missile ‘under armor’ with our ‘CROWS-J’ update,” Venable explained. Under the Common Remote Weapons Station-Javelin, or CROWS-J, effort the Army is updating the Remote Weapon Station to a CROWS system, he said. Some of those will be able to fire the Javelin.

Reiterating that it was the combination of ongoing lethality upgrades that could significantly impact the future 105mm MGS decision noted above, he observed that both the anti-tank guided missile system and CROWS-J recently entered important test phases.

The anti-tank guided missile system has entered ongoing preparations, training and fielding for its operational test and evaluation out at Yakima Training Center in Washington state. And CROWS-J has reentered developmental testing for a follow-on operational test, probably sometime early next year. The service anticipates that the first unit equipped for all the Stryker lethality upgrades will be 1-2 Infantry in fiscal year 2022, he said.

While the chem-bio platforms are the only Stryker-based systems currently fielded outside of the combat teams, Venable acknowledged that one future vision could expand the platform in non-Stryker units.

“The Army is looking across the variants in a similar fashion to the way we are actioning the three weapon systems,” he said. “For example, in partnership with our network modernization [program managers] and our nuclear, biological and chemical PMs, we are taking mission equipment packages, and we can integrate those onto future updates to the base platform. So the DVHA1 forms the basis for a number of both current and future capabilities.”

Venable was also anxious to discuss the Stryker program for network modernization.

“It works in much the same way as aligning the lethal capabilities, command capabilities, sensor capabilities and so forth that we’re already working on,” he offered. “This is an effort that we anticipate we’ll get started in FY ’21 to integrate the Army’s future tactical data networks into the program. And it will result in tactical data at the right place at the right time to the right leader on the ground at the very tactical edge.”

In parallel with their own future integration planning, the Stryker platform has appeared in several developments and testing by other Army organizations.

One of these developments was the creation of six Interim Maneuver Short-Range Air Defense system platforms now entering soldier evaluations.

Noting that the IM-SHORAD platforms were created under the Army’s Program Executive Office for Missiles and Space and not PM Stryker, Venable added, “The Maneuver Short-Range Air Defense program will be on a Stryker DVHA1 that will be fielding at echelons above brigade and task organized to brigade combat teams as required.”

He continued: “There are other capabilities, such as command post, that will come online in the future. That’s another that will use the DVHA1 platform as a basis for providing those capabilities to brigade, division and corps command elements, some of which will be outside of” a combat team.

In addition to uses like IM-SHORAD, Stryker platforms have also been tied to a number of recent experiments, such as the range of potential enhancements for Stryker Reconnaissance Vehicles explored during the Army’s Joint Warfighting Assessment 2019 at Yakima Training Center.

Asked for clarification on the robotic Dragoon, Keith Briggs, branch chief of robotic combat platform integration for the cross-functional team, offered that the Stryker’s XM813 cannon fired “standard training rounds” from the Kongsberg MCT-30 turret during the demo.

QinetiQ North America served as the prime, utilizing hardware from previous robotic programs including the route clearance interrogation system. Kongsberg was a subcontractor on the contract and provided the wireless fire control, he said.

While PM Stryker provided the vehicle, they were not in charge of testing.

“We have a number of developmental programs for things like high-energy lasers and robotics that are not part of our base program,” Venable acknowledged. Other organizations, such as the Army Rapid Capabilities and Critical Technologies Office and some of the laboratories are working on those projects, he added.

In his own future vision, Venable offered his view that the DVHA1 platform “forms the basis of next generation combat capability for Stryker formations for the next 30 years.”

At that point, what was once called an “interim armored vehicle” will be finishing its sixth decade of service.

“Stryker is going to be a key combat force in the U.S. Army for quite some time to come,” Venable summarized. “It’s the ‘Swiss Army Knife’ of combat vehicles, with a number of current and future mission equipment packages that enable expanded capabilities on an austere battlefield.”