The Next Chapter of the Predator’s Story 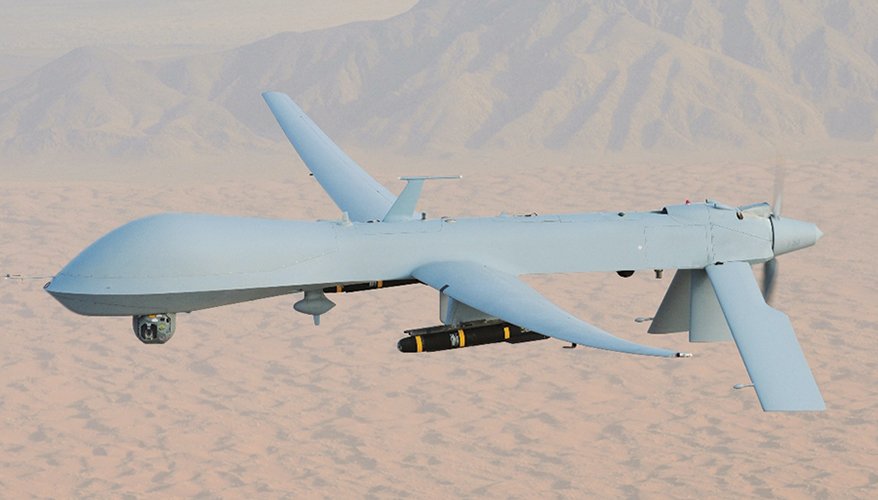 Since humankind occupied caves, the evolution of weapons has followed a predictable path.

Namely, warriors want to do as much damage to opponents as possible, while exposing themselves to as little danger as possible.

That’s why the weapon of choice for several millennia was the spear, not the sword. Better to jab someone from farther away than up close.

Modern warfare brought us guns, long-range cannons and high-flying bombers to expand the distance between combatants.

Safer, but not totally safe. Defenses evolved as well and no airplane or artillery battery is completely out of an opponent’s reach.

Was the attachment of a Hellfire missile to a Predator unmanned aerial vehicle the end state of this evolution?

Putting aside strategic weapons attached to intercontinental ballistic missiles, tactically speaking, has the aggressor in a battle been any more protected than the operators of the Air Force’s armed medium-endurance, long range drone?

The pilot and the trigger puller are literally a half-world away from danger.

This month National Defense for the first time on its cover features the Air Force’s Reaper, the follow-on to the Predator.

Unmanned aerial vehicles have been featured on the front of the magazine before, but not the Predator or Reaper, or their Army, Coast Guard or foreign market variants manufactured by General Atomics Aeronautical Systems. What an oversight.

The so-called Global War on Terrorism — still ongoing no matter what the Pentagon says about a renewed focus on great power competition — is when armed drones came of age. And perhaps no technology will be more closely associated with the nearly two-decade conflict.

Unmanned airplanes weren’t new on 9/11. Remote-controlled aircraft have existed since almost the dawn of aviation. The Predator A model first saw action in the skies over Kosovo as an intelligence, surveillance and reconnaissance aircraft.

A few short weeks after U.S forces entered Afghanistan in 2001 the still experimental aircraft were rushed to the field. Soon thereafter, Hellfire missiles were attached to their wings.

Pilots and sensor operators could sit in an air conditioned room in Nevada and fly the drones in Afghanistan thanks to the third element needed for the weapon systems to succeed: robust satellite communication links.

The rapid evolution of Predator-class drones was abetted by permissive environments. There were no opposing air forces or sophisticated anti-aircraft weapons to shoot them down in Afghanistan, and later in nations such as Iraq and Somalia.

The Predator emerged as a Swiss army knife of aviation. It could be used in search-and-rescue missions, communications relay, ISR and attack mode.
It’s interesting to look back at some of the first post-9/11 National Defense articles written about the Predator.

Some commenters lamented that the still experimental aircraft was being rushed to the field. True. Early models crashed a lot. They weren’t hardened for electronic warfare. The Air Force had a hard time finding and training pilots. But necessity is the mother of invention and the war demanded that the military stop experimenting with medium-sized drones and send them into battle zones. One wonders if they would still be experimenting if 9/11 hadn’t happened.

One analyst predicted that the Air Force wouldn’t find any operations-and-maintenance cost savings with unmanned aircraft — a one-time selling point for the technology.

That would turn out to be true. It took a lot of personnel to keep the drones in the air, there was the aforementioned attrition, and the military didn’t have the satellite capacity to support remote operations. It had to pay astronomical sums to commercial satellite operators to deliver video around the world in seconds.

Controversy dogged the Predator — and later its follow-on the MQ-9A Reaper — as those who opposed the wars stated that drone strikes killed noncombatants, including children. The number of actual terrorists killed versus noncombatant bystanders is still hotly debated. The Trump administration has reversed earlier policy and declared these statistics unreleasable to the public. Any number — whether it is official or gathered by a nongovernmental organization — has to be taken with a grain of salt as independent verification is difficult in these remote war zones.

Yet history has shown time and again that people don’t like getting bombed. It doesn’t win hearts and minds and there is a chance it creates a next generation of terrorists.

It was also revealed that the Central Intelligence Agency operated its own armed Predators in countries where the United States is not at war and with pilots who were civilians or contractors, and therefore outside the military chain of command.

The Predator is at the end of the day a weapon of war. It has saved U.S. warfighters’ lives in close-air support roles and cost some in one friendly fire incident.
The Air Force is now preparing to develop a next-generation medium-sized unmanned aerial vehicle.

For those who cover military business and technology, there are many interesting questions.

Will the incumbent General Atomics be able to hold on to the contract, or will a better drone built by a competitor emerge?

Can the Air Force field it in a timely manner and cut O&M costs? Will it continue to be a Swiss army knife for counterterrorism, or designed for survivability to go up against more robust air defenses? Are there new sensors and munitions that can reduce collateral damage?

Re: The Next Chapter of the Predator’s Story

The Predator with its two Hellfire missiles as standard armament has given way to the MQ-9 Reaper since the Reaper carries more than two hardpoints.

If the Predators are to be decommissioned by the USAF, give them to the Coast Guard, Border Patrol, USAF ICBM silos’ defense, US Navy Base Security, Highway Patrols, FBI HRT, Wildfire agencies, overseas US Army Base defense, or other government agencies that require a drone with long endurance and loiter times, and not limited by two weapons pylons for war. Those two weapons' pylons could house communications, snooping sensors, perhaps water drop tanks for wildfires, or additional ISR sensors. Police agencies won't need helicopters if they can have a Predator overhead with FLIR to track high-speed car chases, especially down in Southern California.

The aging Predators can be refurbished, repurposed, and reused in government. I agree that two weapons hardpoints is too limited in combat compared to the four Reaper hardpoints that can have double weapon mounts on each Reaper hardpoint (or eight Hellfires compared to just two on the Predator). Predators repurposed and reused do not have to go to the Boneyard...use them for CONUS or security purposes.