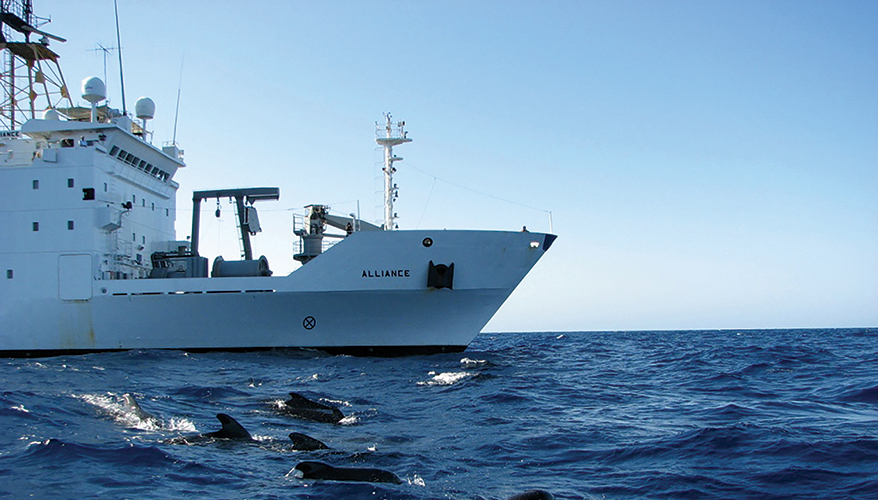 LA SPEZIA, Italy — Over the past 60 years, NATO has employed various coastal and ocean-going vessels for research, experimentation and testing of concepts and equipment on the high seas.

Today those ships are the Coastal Research Vessel Leonardo and NATO Research Vessel Alliance, operated by the NATO Centre for Maritime Research and Experimentation, or CMRE, in La Spezia, Italy, and crewed by the Italian Navy.

“As you can imagine, taking science to sea is really hard and it’s really expensive. Not many nations can do that,” said CMRE Director Catherine Warner. “When we go out on Alliance with whatever mission packages or trials we’re going to do, we will have several different nations participating.”

Andrea Iacono, CMRE’s ship manager in the maritime operations department, said Alliance and Leonardo are complementary. “There are things that the Leonardo can’t do in the open sea because it’s a relatively small ship,” she said. “And there are experiments in waters near the coast that only Leonardo can do because Alliance is too large.”

Iacono said the Alliance used to sail in the High North during the Cold War. “Then the geopolitical situation changed, and we were more focused on the shallow waters and in the Med. Now we are back in the high latitudes.”

Alliance is classified as “Global-Class Ice C,” that means that she can sail in a region of thin ice during good weather, but she is not an icebreaker. “We recently completed a winterization to comply with the International Maritime Operation Polar Code,” Iacono said. “Now we go to the Arctic at least once a year.”

Alliance was designed and built during the Cold War. Since the vessel entered service in 1988 the type of at-sea research it conducts has evolved. The vessel was built to be acoustically quiet — one of the quietest ships in the world. This was to enable research into submarine detection using passive sonar, performed by towing miles of hydrophone arrays. Today Alliance is a critical platform for demonstrating submarine detection using unmanned systems.

Both ships have received periodic modernizations. Alliance was recently upgraded to provide the most modern laboratories for scientists, but at 34 years old, the vessel is getting toward retirement age.

But NATO is already looking ahead to the future.

“We need a new capability to carry out the acquisition of data and conduct science at sea. However, there are a number of options to getting the capability we need,” said Rear Adm. Rene Tas of the Royal Netherlands Navy, assistant chief of staff for capability development at NATO’s Allied Command Transformation in Norfolk, Virginia. “We start with the capability requirements — ‘What does it need to do?’ And then we can look at alternatives — ‘How to do it?’ We will do the analysis, and the best alternative will be presented to the nations, with the recommendation to proceed with the procurement.”

Royal Danish Army Brig. Gen. Poul Primdahl, assistant chief of staff for ACT’s requirements division, said: “We don’t know yet whether it’s a one-to-one replacement for each ship, or some other alternative. It might not necessarily be a ship, or owned by NATO. We are in the beginning of the process now, but we need to keep as wide a view as possible.

“The important thing is to have the capacity to conduct maritime science and technology,” he said.

As attractive as CMRE’s ships are to researchers, Warner said the knowledge and skills of the staff are an even more valuable resource.

“There’s no way CMRE could afford to buy another ship just like Alliance,” she said. “However, the crux of what this organization is all about is the people that are in it and the knowledge that they have.”

“Looking more broadly at the problem, I think you could summarize the whole discussion in saying we need CMRE to keep the maritime edge so that we don’t have to fight the next war because adversaries know they will lose it,” Tas said. “It’s as simple as that.”