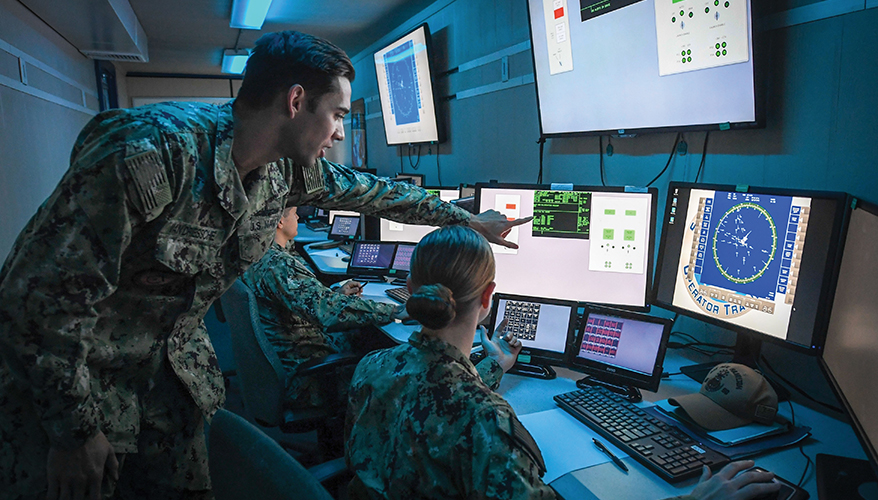 Sailors use the Navy’s virtual combat curriculum aboard the USS Paul Hamilton inside a portable simulator.

The Navy and Marine Corps are revamping how they train personnel as they work to mitigate the effects of the ongoing COVID-19 pandemic.

The virus has revealed areas within the Navy where new training methods may be necessary, said James Geurts, assistant secretary of the service for research, development and acquisition.

“Our ships and our deployed assets were not as … self-sufficient as they needed to be,” he said. “We did a lot of in-person training.”

Traditionally, if maintenance or technical support were needed aboard a ship the service would fly technicians anywhere in the world, Geurts said during the National Training and Simulation Association’s Training & Simulation Industry Symposium, which was held virtually this year because of the pandemic. NTSA is an affiliate of the National Defense Industrial Association.

“We’re in a period where … to get a tech on a ship, it could be a 14-day quarantine period to get to the ship and 14 days after you get to the ship to do a one-hour maintenance job,” he said.

In this crisis that is not an avenue that the service can pursue, he said. “It’s completely impractical.”

The Navy has had to quickly reevaluate its approach and is now leveraging training and simulation technology to conduct rapid tele-training, enable faster maintenance support as well as video teleconferencing to connect faraway technicians to ships to help debug issues remotely with various tools, Geurts said.

The Navy needs to leverage artificial intelligence and other technologies to simplify how to train, use and maintain its complex systems, he said.

Issues brought to light because of the pandemic could be present in a future conflict, and the current situation allows the Navy to root out and mitigate issues now, he noted.

“If we’re in a fight, we’re not going to have the luxury of getting a helicopter and flying a bunch of folks around to a ship,” Geurts said. “There may be times when we have to do it, but [let’s] use these technologies to … train the crew better.”

The service has continued the mission essential basic training of new sailors throughout the crisis. It is on track to meet the Navy’s accession goal of 40,800 for fiscal year 2020, he said.

To make the best use of that time, the service has been conducting virtual training with recruits, he said.

“We do ‘sailorization,’ we do Navy core values, we do what we call Warrior Toughness training and we’ve been using a distributed learning environment to do that,” he said.

“Think iPads in the rooms, where we can push the lessons to the recruits and really maximize the use of that time.”

The service has been conducting what it calls the Marines Awaiting Training program, where Marines that are waiting to arrive at their military occupational specialty school can still receive instruction, he said during a briefing with reporters in July.

“We deliver them something that gets them a head start, gets them rolling with regards to what is required of them to learn,” he said. “COVID has pushed us to do a great deal more with trying to get the distance learning piece, computer-based training ... and getting that type of thing out there.”

More broadly, the pandemic has spotlighted a need for more simulators in the Marine Corps, Mullen said.

“What we would like to be able to do is have large-scale exercises with people plugging into an exercise virtually or live from multiple locations,” he said. Even if COVID-19 was not an issue, virtual training can be beneficial because there are things that cannot always be done in a live environment, he noted.

“We have to find a way to simulate that,” he said.

Naval Air Warfare Center Training Systems Division, which is based in Orlando, Florida, has been working to readjust in light of the pandemic, said Capt. Tim Hill, the center’s commanding officer.

“Every facet of this community has continued to innovate in order to keep moving forward in the face of the restrictions all around us,” he said during remarks at the TSIS symposium. At the time of the event, the organization had been operating for three months at a maximum telework posture known as the distributed workforce.

The organization has had to fight through barriers to keep contracts and programs moving forward, he noted. Despite challenges, the command reached $1 billion in obligations earlier than any year in recent history.

“Similarly, we have worked with our teams who are embedded at the fleet sites to accomplish cybersecurity tasks and upgrades — tasks that would normally be performed by traveling personnel — so that the fleet can keep training.”

“This year I will report that we stabilized at those levels and have continued to have strong demand for our training systems and human performance expertise,” he said.

The command’s focus areas have largely remained steady and include expanded fleet capabilities such as delivering integrated warfighting capabilities, networked training opportunities, and live, virtual and constructive training solutions, according to his presentation slides. Additionally, it is furthering career-long learning objectives such as implementing intelligent tutoring and artificial intelligence across training areas and developing and embedding assessment and data analysis tools.
Cybersecurity is another area of importance, Hill noted.

“No warrior is proficient without understanding the cyber environment in which they operate, and their training systems are often a treasure trove of information about our warfighting capabilities,” he said. “We have several continuing initiatives to operate our training systems and train our warriors in today’s cyber-contested environment.”

Two new areas of focus include improved data-driven decision-making and optimized processes to speed up delivery of products to the fleet.

“Data-driven decision-making is about ensuring that we are diligent about capturing, reviewing and acting upon the metrics that characterize our performance for our program sponsors and the fleet,” he said. “We’ve always had metrics that we analyze routinely, but we’ve ... undertaken a review to ensure that we have the right metrics from the right authoritative data sources, and that we have transparent collective knowledge of our performance across the command.”

As for optimizing processes, Hill said the command has discussed for several years the imperative to reduce its acquisition and technology insertion cycle time so the service can maintain its edge over adversaries.

The command must “act broadly to ensure that we are harnessing innovation and reducing process churn in order to deliver as quickly as we possibly can,” he said. “We are only at the beginning of that endeavor, but I believe that there is a huge potential for that as we move out.”

Geurts noted that the Navy needs to reevaluate its business, technical and programmatic architectures to better account for training equipment.

“As we aim to be much more dynamic, get our iteration speed up, iteration costs down to be able to rapidly insert capabilities in the field, we need to have the training systems that are as equally as agile,” he said.

The service needs to get away from purpose-built, complex capital investments and large training systems and instead be nimbler in its ability to deliver training tools in different forms, factors and features, he said.

Before coming to the Navy, Geurts was the head of Special Operations Command’s acquisition office. SOCOM is known throughout the military for its ability to procure new technology quickly.

“We had full-up trainers on the aviation side, all the way to desktop trainers and procedure trainers that were fairly simplistic,” he said. “We could port to any device. … We’ve got to continue to kind of have that mindset where we can be agile and not have to make everything a custom-built, long lifecycle” system.

That will require the Navy to have the right technical architectures to enable that kind of future, he said. It needs to have the appropriate training approach that allows it to be as dynamic in training as it wants to be in operations.

During the symposium, Geurts told participants that he is pleased by the training innovation ecosystem that has been created in the Orlando area. The confab was originally set to take place in Orlando, where a number of training and simulation companies are based.

“I want to tap into it,” he said. “We’ve got to take that same mindset and be able to operate at the network speed with all the attributes that you guys have shown me over the years of having industry and academia and government folks … and operators all kind of in the big mosh pit.”

The Navy should take the same approach and leverage the technology development that is occurring in Orlando, he said. It is trying to do so through the standing up of a

“NavalX Tech Bridge” in the region. The service first began the effort — which has seen numerous bridges established across the country — last year as a way to enhance collaboration between Naval labs, industry, academia and other military branches.

“Part of what we’re trying to do in the Tech Bridge area is leverage the great talent and enterprise down there to make that more available to the rest of the Navy more easily,” he said. The service wants to close the gap between an operator who has a problem or an idea, and the companies or individuals that have a product that can solve it and the acquisition officials who will field it, he said.

“That way we can operate kind of at network speed, not at kind of a person-by-person speed,” Geurts said.