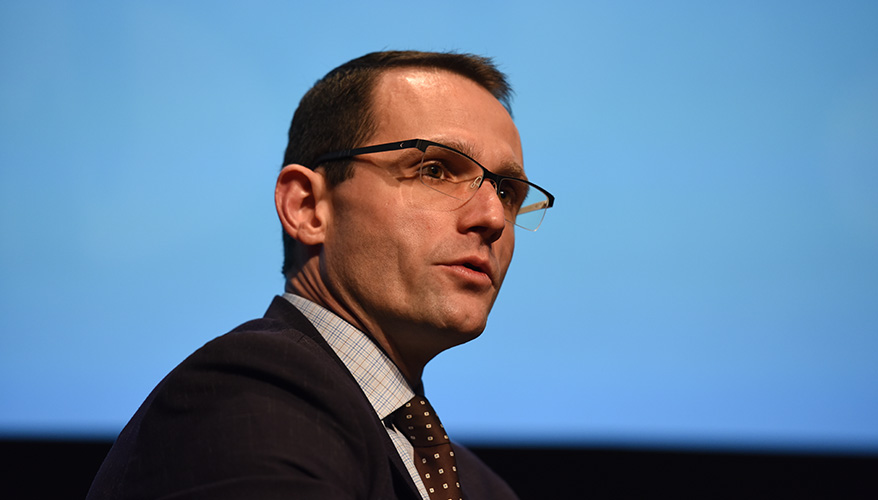 The Air Force is expected to release new information in the coming weeks to showcase the viability of its new "Digital Century Series" concept for building future aircraft, according to the service's top weapons buyer.

The initiative, spearheaded by Assistant Secretary of the Air Force for Acquisition, Technology and Logistics Will Roper, focuses on techniques like digital engineering, open systems architecture and advanced software development methods as a means of accelerating future aircraft development. The new paradigm, if adopted, could potentially enable the service to buy smaller quantities of aircraft at any given time while holding more frequent industry competitions to get the latest and greatest  technologies. The goal is to shorten the modernization cycle for new platforms, Roper has said.

Roper recently conducted a full review with the team working on the acquisition plan for the concept, he told reporters July 14 during a teleconference. The service is approximately three weeks out from having a business case to prove whether the strategy is viable.

“We brought in some independent experts to help check our assumptions, check our map," he said. “We've done the best job we can with our own data, comparing and contrasting.”

Roper said he has been impressed with the initial feedback, and that many of the service's original assumptions have been validated

In recent decades, the Air Force has purchased large numbers of major platforms over an extended period of time from the same vendor, raising the stakes for each industry competition. The Digital Century Series could upend that model.

“It's a completely outside-the-box-idea in this century, but not too uncommon when the Air Force was first created [in the mid-20th century] that you could have continual competition for small lots of airplanes,” he said.

Roper acknowledged that today’s systems are much more complex than those of the mid-20th century.

Roper expressed concern that digital engineering could be reduced to a “buzzword” at the Pentagon or conflated with current systems design practices.

“Almost any program can say they're digitally engineering if they're using a computer anywhere in their design,” he noted. “But that is very different than the full digital thread that we are bringing into next-generation air dominance and is a foundational part of the Digital Century Series acquisition plan.”

The digital thread concept would utilize simulators in a similar way that the service uses flight simulators to keep pilots proficient, he said. Under the new model, simulations would be used in the designing and manufacturing phase of building an aircraft.

“Once that design and assembly simulator is so high fidelity that it's nearly one-to-one with the real world, then you start retiring real-world risk. You start gleaning out parts of the process that are either expensive or force you to go to a large production line with a mass purchase,” he said. “What you're left with is as simple of an airplane to assemble as possible, which opens up the aperture for smaller lots, which we currently don't have in major programs.”

Officials are aiming to keep sustainment costs low, which is one of the traditional benefits of economies of scale. If the service begins purchasing smaller lots of new aircraft, requiring commonality among components will have to be part of industry competitions, he said.

“We also know that there will be parts of the system that we will want to ensure are common between different vendors" such as landing gear, he said. "We wouldn't want to have those be mixed across the fleet."

Requiring commonality among components and support equipment would enable them to transition into multiple potential platforms, he noted.

The new concept would get the Air Force out of the winner-take-all model for major programs, which has shrunk the industrial base, he said.

“The windfall of getting it right is huge,” he said. “It's really important that we find a new model where there are no big winners and no big losers, but continual competition."

No - Just tell him the problem. You know what Henry Ford said. "If I had asked people what they wanted, they would have said faster horses." Musk is already doing his part on many fronts. Take the StarShip prototype. If 100 tons to orbit or moving men and material around the world in 30 minutes isn't enough then perhaps developing more dense and longer lasting batteries would be helpful. Wouldn't nearly silent armor and transport with a very low heat signature be transformational? Or maybe a 30k satellite, fault tolerant, high bandwidth, communication system that could track hypersonic weapons could be useful. Moving fuel into Iraq was counted in bodies, not dollars. High density, transportable, and safe ,power systems would be nice as well. We'll want to charge all that kit as well as power. But that's likely to be nuclear. Not really Elon's thing.

For starters, give Elon Much (1) F-22 and its' plans and turn him loose! You'll have excellent F-22's faster and cheaper than the Lockheed's and Boring's of the world. Look at what he has achieved with cars and rockets! He has killed the US auto comoanies regaring EV's and Boeing with rockets and crews to the ISS.