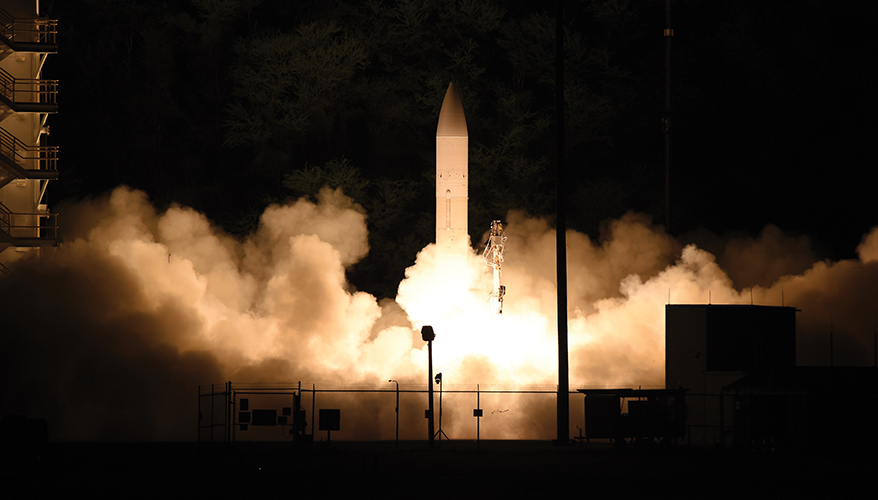 HONOLULU, Hawaii — The Defense Department is shaking up its list of research-and-development priorities as the Pentagon builds new roadmaps for pursuing future capabilities.

When Undersecretary of Defense for Research and Engineering Mike Griffin first came into office in 2017, hypersonic weapons were his top focus area. But not anymore.

“We’ve made a lot of progress in hypersonics,” said Mark Lewis, director of defense research and engineering for modernization. “We love them all the same, but our No. 1 priority, frankly, right now is microelectronics.”

The primary aim of the effort is to ensure that the United States and its allies have access to state-of-the-art capabilities, he noted during remarks at the Pacific Operational Science and Technology Conference in Honolulu, Hawaii, hosted by the National Defense Industrial Association.

The Pentagon in the past has relied on trusted foundries to ensure the supply and security of critical microelectronic parts for U.S. military systems. The Trusted Foundry Program is managed by the Defense Microelectronics Activity. Department rules state that for applicable systems, integrated circuit-related products and services must be procured from an accredited trusted supplier when they are custom-designed, custom-manufactured, or tailored for a specific military end use.

“I would argue that’s been a failed model, and a model that frankly hasn’t delivered what we need for the very simple reason that it’s hard for us in DoD to make an adequate business case to industry,” Lewis said.

The Pentagon accounts for only about 2 percent of the world’s microelectronics consumption, he noted.

“We’re not driving the market in any meaningful way,” he said. “Even worse, when you go to a trusted foundry you almost automatically limit the generation of technology that we’re using. Right now we are two generations behind in microelectronics.”

The R&E office wants to go in a different direction.

“We want to move away from trusted foundries and instead move towards technologies that allow us to operate and develop trusted components in zero-trust environments. In other words, we want to be able to develop a component in a foundry that we maybe aren’t so sure about, but we know that when that part is produced, that part is something that we can have absolutely 100 percent confidence in,” he explained. “Our partners within our DoD laboratories have made some tremendous strides enabling those capabilities.”
Lewis told National Defense that his assistant director for microelectronics, Nicole Petta, is putting together a roadmap for achieving this vision by 2023.

“We need to move quickly on this,” he said. “We’re working pretty actively. We’re looking within a very short time span and we want to be able to access state-of-the-art” technology.

“What worries me the most is that we support U.S. industry, that we don’t shoot U.S. industry in the foot and we don’t put such restrictions on them that they can’t sell things and they go out of business,” he said.

Interagency discussions are being held about the best way to protect critical technologies without stifling microelectronics companies. “It’s a very challenging balance,” he said. “We don’t want to give away the farm.”

The government and industry need to work together to find common sense solutions, he noted.

Has hypersonics fallen to No. 2 on the R&D priorities list? Nope. That spot now belongs to 5G communications, according to Lewis.

The term 5G refers to the oncoming fifth generation of wireless networks and technologies that will yield a major improvement in data speed, volume and latency. They are expected to be up to 20 times as fast as 4G networks, according to a Defense Innovation Board study published last year titled, “The 5G Ecosystem: Risks & Opportunities for DoD.”

“5G has the ability to enhance DoD decision-making and strategic capabilities from the enterprise network to the tactical edge of the battlefield,” the report said. “5G will increase DoD’s ability to link multiple systems into a broader network while sharing information in real-time, improving communication across services, geographies and domains.”

The military wants to be able to use 5G to operate in any environment, including hostile ones. A number of modernization projects are underway, Lewis noted.

“There I would argue that many of our challenges are as political as they are technological,” Lewis said. “Industry would like pieces of our spectrum that we’re a bit reluctant to give up. So that is an ongoing discussion.”

Over the objections of the Defense Department, the Federal Communications Commission in April approved private company Ligado’s application to deploy a 5G network that would use the L-band spectrum, which some believe could interfere with the military’s GPS capabilities. Pentagon officials expect continued pressure from commercial industry to open up more of the spectrum.

Additionally, there is concern in the United States about security risks posed by NATO allies allowing Chinese telecomm giant Huawei to help build their 5G networks, which remains a point of contention.

Meanwhile, hypersonic weapons — which are expected to be highly maneuverable, fly at speeds greater than Mach 5 and overmatch enemy defensive systems — are now the No. 3 priority, Lewis said.

“Hypersonics doesn’t represent a single capability,” he noted. “It’s not a single weapon. … It’s a range of capabilities.”

The Pentagon is working on land-, sea- and air-launched platforms, to include rocket-launched boost glide systems and air-breathing cruise missiles.

It requested $3.2 billion for hypersonics in fiscal year 2021. However, the R&E office wants more funding in the coming years to accelerate its plans.

“We’re keeping the exact dollar numbers under wraps, but I can tell you it is a really, really big number,” Lewis said. “We will be plussing up our hypersonic efforts.”

“We’re not interested in prototype programs that terminate at onesies and twosies,” Lewis said. “You want weapons at scale. And by scale, we mean hundreds of systems.

Eventually, down the line, you need thousands.”

Walt Rutledge, special assistant for hypersonics, said the Pentagon plans to conduct dozens of flight tests over the next four years. The R&E office has developed a national hypersonics road map to guide investments throughout the department, and ensure that the services and other defense agencies coordinate efforts. For example, in March the Army and Navy jointly tested hypersonic glide body technology, which was hailed as a major milestone for developing a new family of high-speed weapons.

The common hypersonic glide body, or C-HGB, system will include a conventional warhead, guidance system, cabling and thermal protection shield. Both the Army and Navy will use the equipment, while developing individual weapon systems tailored for launch from ships or ground-based platforms, according to a Pentagon press release.

“If we want to launch a lot of things off of airplanes, they almost certainly have to be powered by air-breathing engines,” he said.

Rutledge said cruise missiles may turn out to be the most cost-effective hypersonic weapon, and there could end up being ground-launched and sea-launched variants.

“We’re just now beginning to think about how your reusable systems would really fit into the long-term hypersonic roadmap,” he said. Basic research is already underway.

“DARPA and others are doing a hypersonic project such as turbine-based, combined-cycle research and other activities like that, to look at how we might roll reusable systems into our future portfolio.”

The roadmap also includes efforts aimed at defeating enemy hypersonics, which are being led by the Missile Defense Agency. However, that initiative is not as mature as the offensive programs, Rutledge noted.

Meanwhile, the Pentagon is looking for more assistance from industry.

“Where large industry can help us out is … work with the government to incorporate those technologies into systems,” Rutledge said. “Bring the system engineering, bring the integrated weapon system design … and actually produce weapons systems in large scale.”

The department and its industry partners need to move beyond prototyping and deliver platforms that can achieve early operational capability, he added.

Great progress has been made over the last few years in key areas such as thermal protection systems, navigation guidance and control, and air-breathing engine development, according to Rutledge. Terminal sensing and terminal guidance remain a challenge.

“Especially for boost glide systems or perhaps even for cruise missiles when you’re still coming in at hypersonic speeds, the ability to have antennas and antenna windows that function and sensors that function on board are still very difficult,” he said.

“The faster you go, the longer range your seeker has to operate at in order to be able to see the target and do the discrimination or guidance it needs to do,” he explained. “That means you need to have a larger seeker with more aperture in order to have the resolution at that increased range. That makes it harder to integrate onto the platform and make it hypersonic in the first place.”

Rutledge said traditional ways of doing terminal sensing and engagement might not be the best approach for these types of weapons. “I think there’s more innovative ways to think about doing that. That’s where we need some innovation in industry.”

Lewis has a team of assistant directors, each one of whom is charged with charting a roadmap in their respective technology areas.

“We don’t have an exact target date, but we’re going to make those roadmaps available across the Department of Defense,” he said. “Eventually, we do plan to make those available to not only our industrial partners but our international allies as well.”

These roadmaps will evolve over time, he noted.