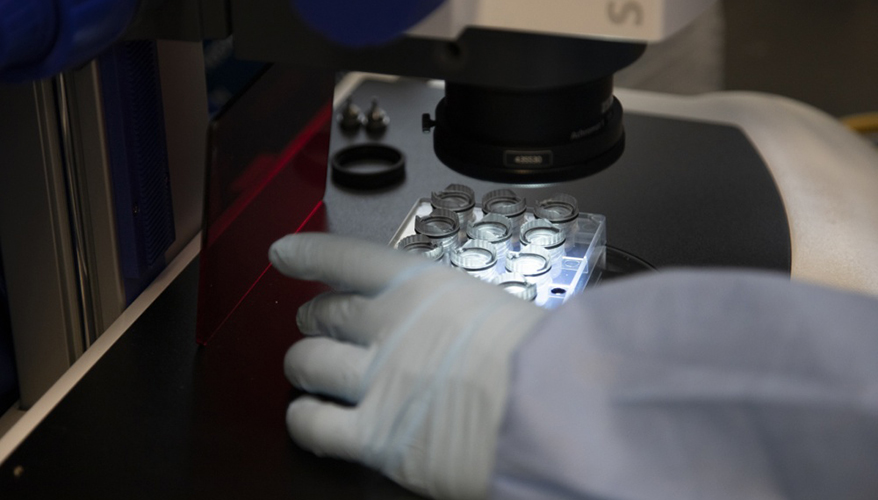 Researchers with the Emerging Infectious Disease branch at the Walter Reed Army Institute of Research, conduct studies in order to find a solution for the Coronavirus, March 3, 2020.

Army researchers have identified a leading vaccine candidate for combating the novel coronavirus and is moving it to the next level of research, the service announced June 11.

The ongoing COVID-19 pandemic has killed more than 100,000 Americans and spread across the globe. The Defense Department has suffered more than 11,000 total cases among troops, civilians, contractors and military families, and 36 deaths, according to Thomas McCaffery, assistant secretary of defense for health affairs.

Army scientists at Walter Reed Army Institute of Research,  of the Army Futures Command’s Medical Research and Development Command, are playing a major role in the U.S. pursuit of vaccines and therapeutic treatments for the virus.

“USAMRDC is moving at unprecedented speeds in the effort to prevent, detect and treat COVID-19,” Brig. Gen. Michael Talley, commanding general of USAMRDC and Fort Detrick, said in a press release. “With the recent selection of this vaccine candidate, we believe we are one step closer to that goal.”

The leading candidate is called Spike Ferritin Nanoparticle, or SpFN, and is slated to enter first-in-human testing later this year.

“The vaccine is unique due to its ferritin nanoparticle platform that has been engineered to present specific pieces of the coronavirus spike protein (the part of the virus that attaches to the lungs) to the immune system,” the news release said.

It is paired with a proprietary adjuvant developed by Walter Reed Army Institute of Research scientists known as the Army Liposome Formulation, or ALF, to further boost the immune response. The adjuvant has generated “strong immune responses” in preclinical studies, the release said.

Two backup vaccine candidates are also moving to the next level of research.

The three potential vaccines were selected from more than two dozen prototypes based on their elicitation of the most promising antibody response in preclinical studies. McCaffery told reporters during a teleconference that the Army is still looking at five or six vaccine candidates, including the leading one that was just announced.

McCaffery said he is spending 80 to 90 percent of his time dealing with issues associated with the military health system’s response to the pandemic.

For Defense Department medical researchers and developers, the focus is “COVID all day, every day,” he said.

Army scientists are supporting an interagency effort known as Operation Warp Speed, with the goal of achieving an effective COVID-19 vaccine by the end of the year. The Defense Department is communicating with the Department of Health and Human Services and other agencies to keep them abreast of what military researchers are doing, the progress being made, different vaccine candidates and the expected outcomes, McCaffery noted.

“They have that data and information to come to their conclusions about which candidates to target … [and] what the appropriate goals are,” he said.

However, some in the public health community have said the aim to have a vaccine ready to go by the end of this year is unrealistic.

When asked, McCaffery declined to say what he thought the odds were that the goal could be achieved. The Pentagon is prepared if a vaccine is not available and the pandemic drags on, he noted.

“The military is always planning for the worst case scenario,” he said. “And so while we are hunkered down and focused on as early as possible getting vaccines and therapeutics available for our active duty [forces], … we don't know if that's going to go” as well as people hope.

The Defense Department has a comprehensive framework in place for coronavirus-related personnel health and force protection guidance — including following CDC recommendations, travel restrictions and limiting access to bases — in the event that the pandemic becomes “a new normal,” McCaffery said.

COVID-19 has roiled the Pentagon and the industrial base. Testing and exercises have been postponed, contractors have been forced to temporarily close up shop and impose other disruptive safety measures, and military forces such as the crew of the USS Theodore Roosevelt aircraft carrier have been hindered in performing their missions.

McCaffery said it is yet to be determined if Defense Department personnel would be given priority for receiving vaccines once they are available, given their importance to national security.

“DoD would need to work very much hand-in-hand with the all-of-government effort on vaccines to make sure … what we need to meet mission [requirements] we have available to us,” he said.

However, national demand will be taken into account, he said. “That obviously will be an issue. I can't tell you right now how that's gonna play out" in terms of who receives the vaccine first.