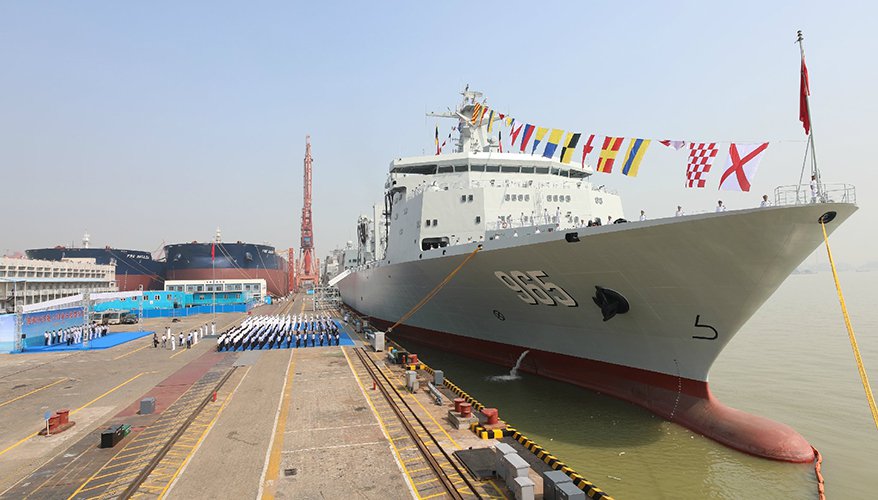 In protracted warfare, logistics and sustainment capabilities are as important as force composition, something China will struggle to mitigate.

Currently the Chinese Navy conducts maritime operations with the help of commercial replenishment ships and ports. While an effective solution in peacetime, civilian logistics and sustainment practices are untenable in combat operations. In pursuit of a truly modern navy, China requires: additional combat capable replenishment ships, such as the Type 901; basing access in critical regions; and securing prepositioned stockpiles like fuel, munitions, and repair parts in countries like the Seychelles and Pakistan.

China’s envisioned blue water navy involves carrier strike groups operating beyond the Second Island Chain into the Pacific and the Indian Ocean. Currently, its maritime deployments consist of small flotillas supported by the Type 903 replenishment ship. According to a report prepared for the U.S.-China Economic and Security Review Commission, the People’s Liberation Army Navy anti-piracy deployments to the Gulf of Aden reveal that the Type 903 replenishment ship can only support two-to-three ships for approximately two weeks at a time before requiring a resupply, seriously hampering China’s near-term expansion goals.

While the Type 903 may be suitable for shorter deployments, like those to the Gulf of Aden, larger and more demanding carrier strike groups necessitate additional fuel — a capability currently lacking in China’s fleet. As such, it is anticipated the Type 901 combat replenishment ship will be the vessel attached to carrier strike groups — with nearly double the fuel capacity as the Type 903. (See Table 1)

If carrier strike group deployments resemble those of the past, the Type 901 will have to support double the amount of ships — or an estimated five to six ships — than the Type 903 supported in the Gulf and Aden.

In addition, the Type 901 will be responsible for providing fuel for flight operations while at sea. Despite possessing twice the fuel capacity, absent any ports or prepositioned stockpiles abroad, the Type 901 will struggle to maintain carrier strike group operations over extended periods of time, especially in combat operations.

According to the Defense Department’s 2018 annual report to Congress on the nation’s military and security developments, “China’s expanding international economic interests create an increased demand for the PLA to operate in more distant maritime environments to protect Chinese citizens, investments, and critical” sea lines of communication.

In addressing these issues, the Chinese navy will likely rely on a mixture of commercial ports for fuel and exclusive logistics facilities for mission critical supplies like munitions and repair parts. It currently relies on access to commercial ports for fuel in 14 countries, including South Africa, Greece, and Spain. While these commercial ports are helpful for replenishment in peacetime, the China will require access to fuel and other supplies from secured prepositioned stockpiles — like its only overseas port in Djibouti, Africa.

As China’s strategic initiatives like its Belt and Road Initiative lead the navy into contested regions, like the Arabian Sea or the Mediterranean, it will require safe and reliable access to critical supplies to potentially support combat operations in the future. In filling this gap, the PLAN may search to lease ports in Pakistan or the Seychelle Islands as logical locations for their iron mountains.

As a near-peer competitor, China’s movement on any of these three areas—investment in replenishment ships, establishing port footholds around the globe, or standing up their own iron mountains — are key indicators to gauge Beijing’s capabilities to support its modernizing navy. Just as China has leveraged the tyranny of distance against the United States to bolster force posture in the Indo-Pacific, so too should the United States bolster its force posture elsewhere in the world and continually develop its relationships with allies and partners alike, thereby reducing potential Chinese footholds in the future.

Will Mackenzie is a research associate for the defense program at the Center for a New American Security.

Re: COMMENTARY: It’s the Logistics, China

I am leaning towards disagreeing here, but not a total disagreement.

The Chinese will use every ship in their inventory from ferries to fishing boats to civilian ships to cargo carriers to haul logistics to its warships. National Defense is thinking that just because the PLAN lacks the military logistics ships that the US Navy uses, the PLAN is at a disadvantage. Not true and no so in China's Policy of "All-out war." Chinese COSCO cargo containers sail all the seas delivering cargo and packages to International ports and COSCO supports Beijing's Security Interests.

The PLAN Militia and special forces in its fishing boats will pirate, harass, and intimidate foreign nations and shipping with Type 95s, AK-47s, RPGs, and Type 69s. The PLA has been known for its infantry wave attacks and I don't see any difference here, combined with the PLA and PLANMC special forces.

The logistics of Chinese eating just a bowl of rice (and fishing for fish for it) is something the Western author fails to understand. As the Vietnam US Navy SEALs learned, it is darn near difficult to destroy rice. If in the ocean, fine, rice can be thrown overboard and sink. If on land, scatter rice and it can be swept up and washed again. Bury it and it can be dug up and washed. SEALs didn't have the time to burn rice. Rice fuels Asian soldiers and Asian soldiers move their feet so that is the logistical fuel of the PLA, PLAN, and PLANMC as described in the history of the Korean and Vietnam Wars where the PLA intervened. If all else fails, rice is the fuel of the Chinese military and the Type 95 (AK-47) and Type 69 (RPG) has proven deadly to Western Forces. NATO needs to consider all this.


Krashnovians at 9:09 PM
Re: COMMENTARY: It’s the Logistics, China

The article is correct, but neglects the side with the largest logistics shortfalls and greatest vulnerability

Logistics is critical to becoming a global sea and maritime power. The ability to conduct Replenishment-At-Sea (RAS) operations via ship-to-ship or aircraft-to-ship a vital part not only projecting regional power but global power. Replenishment in the air is accomplished via in-flight refueling, a capability, like RAS, our peer-competitor lags behind compared the United States and her allies. Naval and air operations cannot be sustained not only in peacetime but wartime absent a highly proficient logistical capability. The US has significant experience in this regard both in peace and war (World War Two, Cold War, and Post Cold War). A country cannot become a world military power without it.