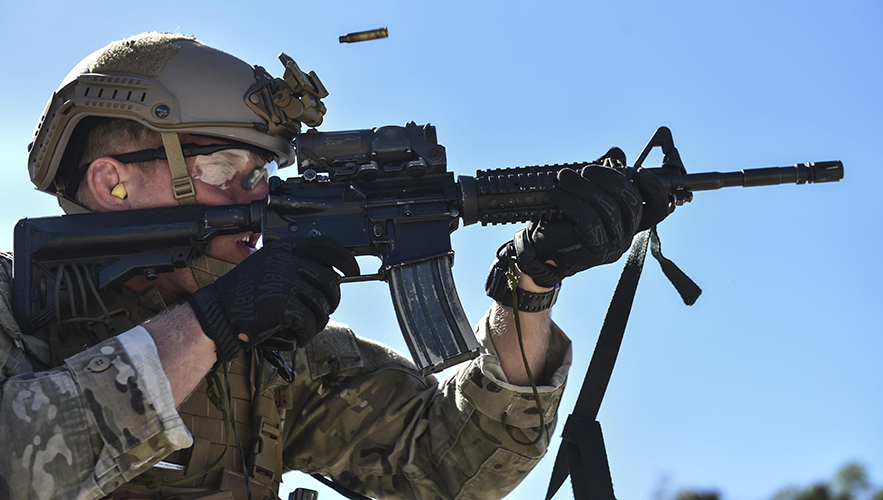 Special Operations Command has its eye on the Army’s next-generation squad weapon, an acquisition official said May 13.

“As the Army moves forward, we are absolutely cheerleaders for that effort," he said during the virtual Special Operations Forces Industry Conference, or vSOFIC, which is managed by the National Defense Industrial Association. "Our partnership with PEO soldier out of the Army … is absolutely strong."

The service’s next-generation squad weapon program has been one of the Army’s most high-profile soldier lethality efforts. Besides new weapons, the program also includes the development of a new 6.8 mm round that is expected to be more lethal than the current 5.56 mm NATO ammunition.

In August 2019, the Army awarded other transaction authority agreements to Sig Sauer, General Dynamics Ordnance and Tactical Systems and Textron Systems, which are all providing prototypes for soldier evaluation.

Delivery of weapons and ammo for formal test and evaluation is slated for December of this year.

Noting that 70 percent of Special Operations Command’s deployed forces are part of the Army component, Babbitt said the command has participated in multiple soldier touchpoints to provide input regarding the weapon and the accompanying 6.8 mm ammo.

“That certainly is a great capability that we see coming forward,” he said.

The command is also looking for lighter ammo that would reduce overall cartridge weight by 20 to 30 percent compared to the current brass rounds, Babbitt noted. According to his presentation slides, the command plans to release a request for proposals for 7.62 mm lightweight cased linked ammunition in the fourth quarter of this fiscal year, and award a contract in fiscal year 2021.

“We have a number of efforts getting after lightweight ammunition,” he said. Potential materials for future cases include polymer or stainless steel. However, “there’s a number of different approaches that vendors should take into this,” he added.

SOCOM is looking for lighter casing for many of its bullets.

“After .50 caliber, .338 is probably the next easiest simply because the larger the caliber, the larger the weight savings that you get ... and the easier it is to produce and to get reliable casing," Babbitt said. the command is interested in that technology for "all of our different calibers," he added.

SOCOM is also working with the military services on this effort, he noted. The Marine Corps is taking the lead on adopting a polymer case for the .50 caliber rounds.

“All of us are coming together to shift to polymer rounds just because of the weight savings,” Babbitt said. The military wants "polymer cases for our rounds and also polymer links or stainless steel or alloy or something like that to get away from the heavy brass," he added.