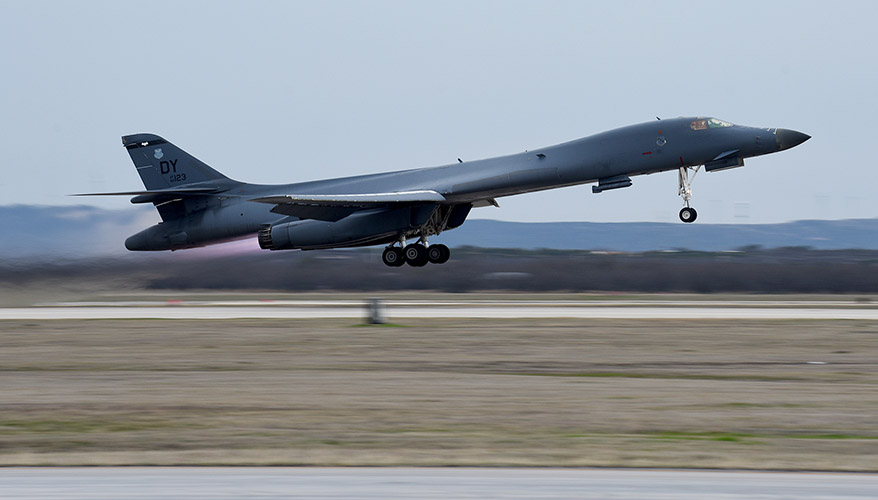 A B-1B Lancer takes off from Dyess Air Force Base, Texas.

The Air Force wants “just north” of 220 long-range bombers in its inventory by 2040, a service official said April 9.

Previously, the service said it wanted 175 aircraft in the current fleet, but “that was a programmatically derived approach,” Gen. Timothy Ray, head of Air Force Global Strike Command, told reporters during a call with reporters.

“There are multiple ways to get to that particular path,” he said. "For where we are, we think the longer-range capabilities with longer-range cruise missiles is where we want to go."

The Air Force has been looking to improve its fleet by purchasing the upcoming B-21 Raider and modernizing the Boeing B-52 Stratofortress.

To reach 220, the service will continue focusing on adding capacity to the B-52 and sustaining the B-1 Lancer. However, the Air Force is still examining how many B-21s and B-52s will make up the final number, he noted. Officials have said over the course of the development program that the Air Force intends to build 100 B-21s.

“I have to set the conditions over the next couple of years and even my replacement will have to work through … the considerable chore to set those conditions,” he said. “I believe we’re probably four or five [years] away from being able to pop what that plan will look like specifically.”

The B-1 bomber may also be used to advance the service’s hypersonic weapons efforts, he noted.

Ray told Air Force Magazine this month that officials may use the platform to carry the future Air-launched Rapid Response Weapon. Earlier this year, the service chose to move forward with ARRW instead of the hypersonic conventional strike weapon.

“I see there an opportunity to take on that hypersonic mission faster for us inside the bomber fleet,” he said.

Meanwhile, the schedule for the B-21 Raider is still up in the air. Randall Walden, director and program executive officer for the Air Force’s Rapid Capabilities Office, said last year the service is not likely to achieve its original goal of reaching first flight in 2021. Ray declined to comment on whether or not COVID-19 challenges could bring schedule changes and delays.

“Anything I tell you today may not be a valid point two weeks from now,” he said. “We’re going to go through arguably the toughest several weeks in our nation’s history since the second World War."

"We’re flying a little less, but we’re flying what we need,” he added.