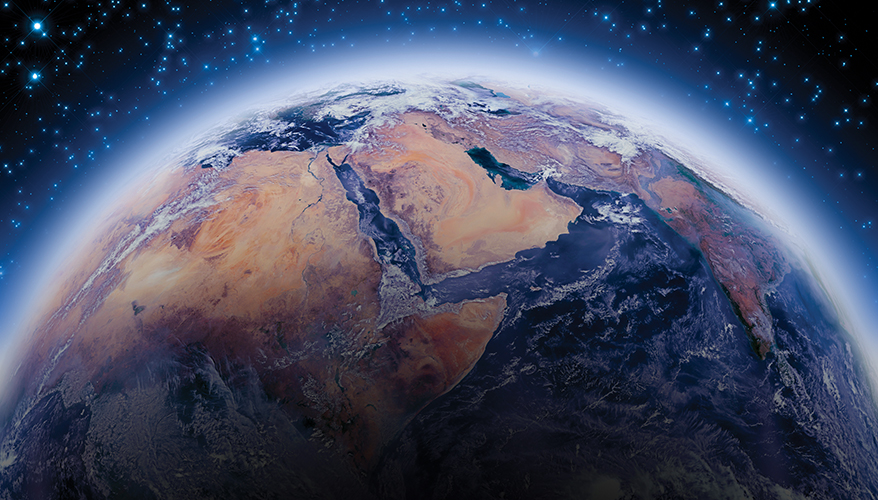 At the biennial Dubai Air Show in November, a group of officials from across the Arabian Peninsula spoke on a panel to discuss ways in which space capabilities are being developed in the Middle East.

In recent years, the United Arab Emirates has taken steps such as establishing the UAE Space Agency in 2014. The Arab Space Coordination Group was created as an offshoot of the agency in March 2019, establishing a partnership between a number of Arab nations, including the United Arab Emirates, Jordan, Bahrain, Algeria, Saudi Arabia, Sudan, Lebanon, Kuwait, Morocco and Egypt, according to Emirates News Agency, the UAE’s official media outlet.

Additional countries are showing interest in joining the organization as well, Mohammed Nasser Al Ahbabi, director general of the UAE Space Agency, said at the air show. International cooperation will be key to pursuing future space projects, he noted.

“UAE and the Arab countries are all complementary and they all serve each other, and therefore the UAEs’ initiatives are [also] the Arab world’s initiatives,” he said.

Now, the group is looking to expand its work and will soon establish a legal framework and outline its objectives, he noted.

A new satellite will be developed at the National Space Science and Technology Center at the United Arab Emirates University in Al Ain over three years, Emirates News Agency reported. The organization was launched with the initial goal of creating a spacecraft that could monitor environmental and climate change. The project is sufficiently funded, Ahbabi said.

Member nations have already met with engineers to discuss the project and draft their plans, he noted.

“We are looking into collaboration and cooperation opportunities,” he said. “This project will give us confidence and prove to us that there is nothing impossible.”

The satellite will be dubbed “813,” representing the year in which the House of Wisdom in Baghdad was established under the reign of Al-Ma’mun, the seventh Abbasid caliph, Ahbabi said, noting that officials chose to stay away from catchy names.

“The wisdom house was a house … for translators to come and translate books of science,” he said. “What we are seeking today is to have a satellite that will … provide us with all the data that will benefit us best.”

The spacecraft will take about three years to develop and have a polar orbit 600 kilometers above the Earth, according to the news report. The system will have a five-year lifespan with a ground station in the UAE and receiving stations in multiple Middle Eastern countries.

To prepare for the project, Bahrain is developing a lab for analyzing statistics and data received from the satellite, said Mohamed Al Aseeri, chief executive officer for the Bahrain National Space Science Agency. The spacecraft will be able to collect information such as levels of greenhouse gases, pollution and dust.

“We will send it to our lab to analyze it,” he said. “The project is a smart project. It came at the right time for all the Arab countries. It will contribute to give us a leap. It keeps up with the changes in the marketplace.”

However, countries in the region are also setting their sights on bigger plans to develop a Middle East-wide space agency. Europe and Africa already have their own, and “we are next,” Ahbabi said.

“We [are] still at the beginning, compared to our ambitions,” he noted. “We haven’t started yet.” The development of a satellite “is a strategic message being sent to the Arab world that, hopefully, one day we will have our own space agency.”

To support these initiatives, Middle Eastern countries are heavily investing in their educational systems to create a workforce with the capability to build satellite technologies, noted Awni Mohammed Al Khasawneh, director general of the Royal Jordanian Geographic Center. This will be essential for the development of the UAE Space Agency, and the center is working with local universities to foster capabilities, he noted.

“Our philosophy as a regional office is to coordinate and sign … bilateral agreements between the geographic center and some of the domestic universities,” he said.

Additionally, Bahrain is training a “space team” focused on teaching younger generations about these technologies, Aseeri said. The program kicked off in 2018 and is focused on training a group of applicants that will contribute to the nation’s goal of launching its first domestically built satellite in coordination with the UAE Space Agency. Bahrain announced in July 2018 that 15 companies agreed to fund the satellite construction and help train the space team.

Khalifa University is the first headquarters of the group, and participating students are in their second semester of school, Aseeri said.

The team’s current focus is to build the satellite, but “our ambition in Bahrain is beyond that,” he said.

Meanwhile, Oman is working on establishing its own space agency, said Saoud Al Shoaili, director general for the Oman ministry of technology and communications. The country has relied on satellites as far back as the late 1970s for television broadcasting, but it is looking to expand its capabilities, he noted. This will require Oman to have its own domestic satellite technology, he said.

Oman already has cooperative agreements regarding space activities, he noted. To further establish working relationships on an international level, Oman’s ministry of technology and communications plans to open an administrative department focused on satellites.

Establishing new satellite projects is pricey, Shoaili noted, and “there is no point in conducting any space activity without having a cooperation agreement with others.” The process for building and launching the spacecraft may require multiple locations and greater know-how, he said.

“Indeed, the project at the end will be handsomely expensive, so we need to invest in knowledge,” he said. “I think in the Arab world this is what we are lacking. We are lacking knowledge.”

Oman has already had strong coordination with other Arab countries on telecommunications work, he noted, and hopes to apply lessons learned to future initiatives.

“We have achieved many objectives,” he said. “If we take this same approach and we apply it to the UAE’s initiative as the Arab group and we exert efforts, [we will] stand together to serve one purpose — which is exploring space. We will do that in time.”

Naser Al Hammadi, head of international organizations and relations at the UAE Space Agency, said the Arab countries need to integrate their work on space activities.

To reach out to the rest of the world, Arab countries must participate more in international conferences that pertain to space policies and legislation. Participation has been weak so far, he said.

“We need to link bridges and work with others,” he said. “This is one of the strategic goals that we are trying to achieve so there are agreements and [memorandums of understanding], there are certain meetings held with international bodies regarding how the Arab countries could benefit from the international space agencies and expertise.”

Additionally, a scientific space committee in Jordan is putting together a plan to advance diplomacy and policy in relation to space initiatives, Khasawneh noted. The group hopes to explore how legal procedures and legislation will impact efforts in space technologies.

Developing these capabilities across the Middle East will necessitate tighter coordination among Arab countries, Khasawneh noted. Leaders also recognize that sustaining these technologies will require continuous cooperation in the region, he said.

The development of the Arab Space Coordination Group will make this collaboration easier. The aim is to create “very sophisticated programs and initiatives,” Al Hammadi noted.

“We cannot progress without cooperating with each other,” he said. “Through our domestic, regional and national collaborations, we will achieve our objectives fast enough.”