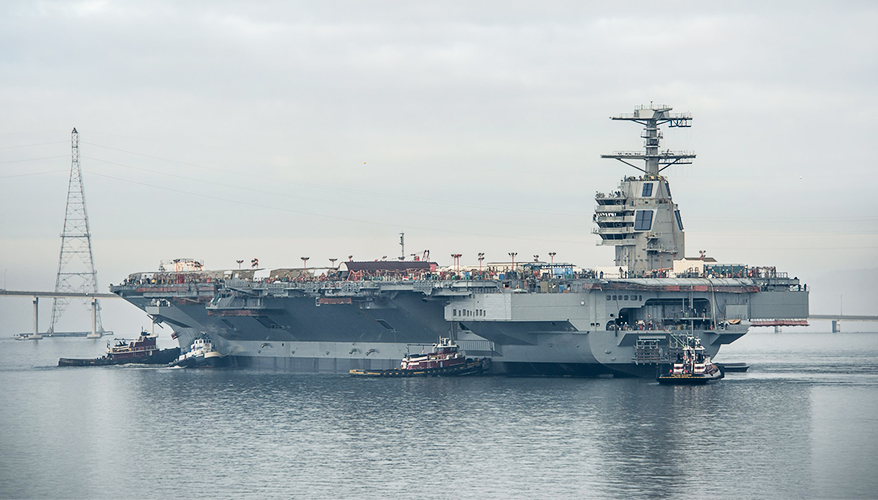 The Navy’s Gerald R. Ford-class aircraft carrier is continuing to face challenges as the lead ship moves into post-delivery test and trials. Designed to replace the service’s current Nimitz-class ships, the new platform has faced a litany of issues that have delayed the program since the USS Gerald Ford, CVN-78, was ordered in fiscal year 2008. The carrier uses the same form as the Nimitz-class for the hull but incorporates new systems so it can generate more aircraft sorties per day with a smaller crew. The first four ships in the class include the Ford, John F. Kennedy (CVN-79), Enterprise (CVN-80) and Doris Miller (CVN-81).

Robert Behler, the Pentagon’s director of operational test and evaluation, said in his fiscal year 2019 annual report that the carriers are continuing to experience problems with systems such as the catapults, arresting gear, weapons elevators and radar. Newport News Shipbuilding, a division of Huntington Ingalls Industries, is the prime contractor for the program.

“Reliability of these critical subsystems poses the most significant risk to the CVN-78 [initial operational test and evaluation] timeline,” Behler said in the report.

The Navy’s schedule for the program is “aggressive” and continues to slip, the report stated. Planned ship availability was extended, pushing initial operational testing to fiscal year 2022 and first deployment to fiscal year 2023.

In July 2018, the ship entered post-shakedown availability after eight independent steaming events at sea. The service needed additional time to work on repairs, leading it to extend the phase by three months to October 2019.

William Couch, a spokesperson for Naval Sea Systems Command, said the ship “continues to progress in a series of rigorous test events to demonstrate the effectiveness of the ship’s combat system in self-defense.”

The carrier is slated to finish ship self-defense testing in 2023.

“To date, the Navy has conducted more test events on USS Gerald R. Ford than on any previous aircraft carrier,” he said in an emailed statement. “Compared to Nimitz-class ships, USS Gerald R. Ford is equipped with significant updates to its integrated combat system.”

During post-delivery test and trials, the service is certifying fuel systems, conducting aircraft compatibility testing, exercising the flight deck and testing the on-board combat systems, he said. Combat system ship qualification trials are scheduled for 2021 and additional developmental and operational evaluations will continue over the next 15 months.

So far, the service has conducted one of the four planned self-defense ship operational tests, according to the DOT&E report.

“If the Navy does not conduct all of the remaining events, testing will not be adequate to assess the operational effectiveness of the CVN-78 combat system,” it said.

As the Navy works to fix issues outlined by Behler, General Atomics Electromagnetic Systems Group is working on the ship’s advanced arresting gear. In October, high-cycle testing was conducted on a system that is identical to the one on the carrier, according to a company news release.

“Arresting aircraft at a high rate over a sustained period on the same wire is an aggressive test and shows the ability of the system to withstand extreme conditions,” Scott Forney, president of GA-EMS, said in the January announcement. “The Ford has the capability for an even higher operational tempo than demonstrated at the test site.”

The system has completed over 5,000 arrestments at Joint Base McGuire-Dix-Lakehurst, New Jersey, and 747 arrestments with CVN-78 during initial sea trials.

Behler’s report also put particular focus on the SLQ-32(V)6 shipboard electronic warfare system, the SPY-3 multi-function radar and the cooperative engagement capability. During a developmental test, the radar and cooperative engagement capability “failed to maintain detectionsand tracks for one of the threat surrogates in the multi-target raid,” while the SLQ-32(V)6 showed poor performance in developmental testing.

“These deficiencies and limitations reduce the overall self-defense capability of the ship,” the report said.

Additionally, the weapons elevators are continuing to present problems. In January 2019, former Navy Secretary Richard Spencer announced that he had promised President Donald Trump his resignation if the elevators were not completed by the time post-shakedown availability maintenance work was completed. Spencer was forced to resign in November due to an unrelated matter.

Now, the service predicts that it will have the elevators done before the end of 2021, Capt. Ron Rutan, CVN-78 class program manager, said in January at the Surface Navy Association’s annual symposium in Arlington, Virginia. The service has installed all 11 elevators and certified four. Spencer had predicted that the systems would all be ready before the carrier reaches initial operating capability.

“We’ve done 5,000 cycles with no issues,” Rutan said. “It’s been a challenge getting these things through, but we get it done and we get it done right.”

Rutan expressed confidence that the Navy will be able to get all elevators completed in accordance with the new timeline.

“I believe we’re going to get done before May of next year,” he said. “I think we’ll be able to get it accelerated from there ... but there’s a lot of risk.”

The service needs to continue working on the electronic surveillance system as well, the DOT&E report said.

“In developmental testing on [a self-defense test ship], the SLQ-32(V)6 electronic surveillance system demonstrated poor performance that prompted the Navy to delay additional operational tests until those problems could be corrected,” the report stated.

Behler included multiple recommendations for fixing these issues. For instance, the Navy should fund the remaining self-defense test ship events, which are the tests that helped unearth issues with the systems. Additionally, the service should implement required software updates.

“As applicable, the Navy should utilize the lessons learned from CVN-78 to inform design modifications for CVN-79 and future carriers,” Behler said.

Service leadership is pushing forward to solve these problems. In January, Acting Navy Secretary Thomas Modly held a “Make Ford Ready” leadership summit to discuss plans for the aircraft carrier outlined in a December memo. Service leaders briefed about 50 stakeholders on the ship’s progress, according to a news release.

Modly plans to receive a monthly status update on the work from the chief of naval operations and the assistant secretary of the Navy for research, development and acquisition.

“My expectation is that we will work with diligence and speed to accelerate each deadline if possible,” Modly said in the memo. “The Ford is just the first ship of this new class. It must set the standard for those that will follow.”

Rutan said the carrier’s problems are not unusual. Since CVN-78 was commissioned in 2017, it has completed 747 aircraft launches and 747 recoveries, he noted.

“If you don’t have any problems in your program, you’re not taking on enough risk,” he said. “We pushed the envelope and we’ve done a very good job doing so.”

Moving forward, Rutan said he expected there to be more cooperation among those working on the ship.

“We’re more aligned collectively and we know the pathway we’re going,” he said. “The attention is there. The priorities are there. All is outlined there in the secretary’s” memo.

Throughout the ship’s development, lawmakers have been watching for cost overruns. In a February report titled, “Navy Ford (CVN-78) Class Aircraft Carrier Program: Background and Issues for Congress,” the Congressional Research Service noted that estimated procurement costs of CVN-78, CVN-79 and CVN-80 have grown by 24.7 percent, 23.2 percent and 15.1 percent, respectively, since the fiscal year 2008 budget request was submitted. Some of the main sources of risk include the electromagnetic launch system, the advanced arresting gear and the dual-band radar. To lower costs, the Navy opted to award Newport News Shipbuilding a two-carrier contract last year. The decision is expected to save the service about $4 billion, according to presentation slides from Capt. Philip Malone, future aircraft carriers program manager, at the Surface Navy Association conference.

The contract “further improves on CVN-79 efforts to frontload as much work as possible to the earliest phases of construction, where work is both predictable and more cost efficient,” the slides said.

Moving forward, the service plans on using these issues to learn about the maintenance process for the ship, said Capt. Charles Ehnes, the Navy’s in-service aircraft carrier program manager. It does not plan on having a separate program office for Ford-class carrier maintenance.

There are “going to be a lot of lessons learned as you proceed forward,” he said. “We have what we think are the correct engineered periodicities of various pieces of equipment.” However, “things will evolve over time,” he added.

It's confusing, all the conflicting information out there regarding the Ford class (CVN-78). In one report I read that the Arresting system is now fully functional and then there's this story. In another story I read the Elevators now work as designed. The sobering knowledge that construction started twelve years ago and that the Navy hopes to have the ship "ready" by 2023 puts a damper on all of the excitement.

Brian Foley at 3:59 AM
Re: Navy Still Struggling with Ford Aircraft Carrier

“If you don’t have any problems in your program, you’re not taking on enough risk,” he said. “We pushed the envelope and we’ve done a very good job doing so.” ==================================== In fact, they've outdone themselves to the point of compromising the usefulness of the ship itself. The single-point-of-failure problem with EMALS is/will-not-be-resolved, which will render the ship unable to launch aircraft in the event of the loss of even one catapult (due to maintenance, battle damage, or accident), while the cost of the program continues to increase. There are also concerns that the ship will not have the number of berths required, as the crewing model remains incomplete at best, and the savings on reductions of crew size unknown. None of this counts the other issues listed in the article, or in DOT&E's reports. There are so many problems, that there is now far more interest in building more LHA-6 sized carriers at a fraction of the cost, to reduce risk, get better coverage, and better distribute assets, than ever before.

PolicyWonk at 11:46 AM
Re: Navy Still Struggling with Ford Aircraft Carrier

The damn thing will be decommissioned by the time the testing is complete.