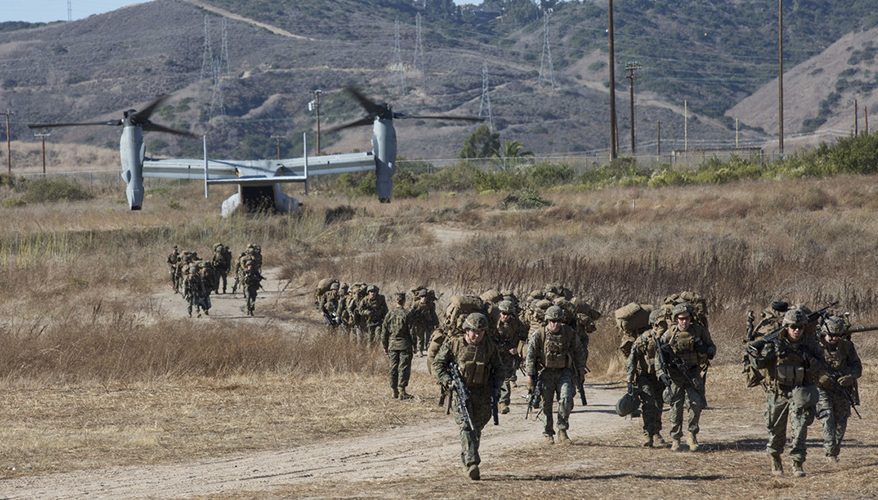 The Trump administration’s fiscal year 2021 budget proposal would cut Marine Corps funding by $1.4 billion and reduce the size of the active duty force, according to budget documents released February 10.

“The institutional changes and divestment decision are based on a long-term view and singular focus on where we want the Marine Corps to be in the next five to 15 years,” the budget documents said.

The request would fund a force of 184,100 Marines, a decrease of approximately 2,300 enlisted active-duty Marines relative to this year.

The cuts to personnel will come from “headquarter reductions — so they look for excess capacity — not operational units, per se,” Deputy Assistant Secretary of the Navy for Budget Rear Adm. Randy B. Crites said during a press briefing at the Pentagon.

However, its research, development, test and evaluation funding would see a slight bump. The administration requested $2.7 billion for RDT&E in 2021, $93 million more than what was requested in 2020.

Tom Spoehr, director of the Center for National Defense at the Heritage Foundation, said that decision appeared to be part of a trend across all of the services.

“The big takeaway from me is that almost across the board, it seems like the procurement accounts took a hit in order for most of the services to protect their [research, development, test and evaluation] accounts,” Spoehr said. “That's pretty similar to what happened in the Marine Corps.”

The fiscal blueprint includes a request for $2.9 billion for procurement — $40 million less than the previous year’s enacted amount.

The service is asking for $382 million to procure 752 joint light tactical vehicles, which is 512 fewer vehicles than in 2020.

The request also calls for buying five more Marine One presidential helicopter replacements, or VH-92As, for $610 million. The aircraft, which was designed to replace the aging helicopter fleet of Sikorsky VH-3D Sea Kings and VH-60N White Hawks, is scheduled to reach initial operational capability in fiscal year 2021. The award for five more aircraft is scheduled for the second quarter of 2021, according to budget documents.

The budget calls for seven CH-53K King Stallions at a cost of more than $1 billion. The platform is a Sikorsky-made helicopter that is the Defense Department's only “ship-board compatible” heavy-lift cargo helicopter, according to budget documents. The CH-53K’s are a replacement for the CH-53E, which the service has been operating since the early 1980s. The service procured six CH-53Ks in 2020.

The request would also fund the first full-rate production lot of 72 amphibious combat vehicles — 16 more than in fiscal year 2020 — at a total procurement cost of $479 million. The platforms are eight-wheeled, ocean-capable systems meant to transport Marines from sea to shore and then operate on land.

"That's useful as they try and kind of ramp up that program in a constrained environment," Spoehr said.

Last year, the service requested to purchase MQ-9 Reaper drones for the first time. It was authorized to buy two. However, the 2021 budget request does not include the platform.

The fiscal proposal would also buy fewer F-35 joint strike fighters. The service flies the B variant of the aircraft, which has short takeoff and vertical landing capabilities. The request is for 10 of the Lockheed Martin-build platforms, six less than the previous year, according to budget documents.

The Department of the Navy, which includes the Marine Corps, is requesting $207 billion in total for 2021.