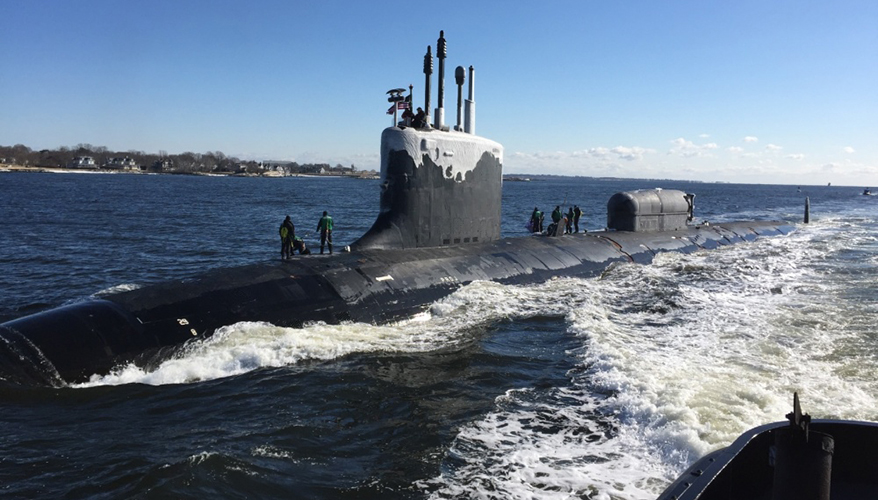 The Navy is proposing cutting back its shipbuilding accounts by $4 billion, according to President Donald Trump’s budget request for fiscal year 2021 that was released Feb. 10.

The Department of the Navy — which includes the Navy and the Marine Corps — requested a total budget of $207.1 billion for fiscal year 2021, which represents a decrease of $2.9 billion from fiscal year 2020. That total is inclusive of base funding overseas contingency operations funding and emergency funding. However, the Navy noted that isolating for the one-time enacted increase of $4.8 billion in fiscal year 2020 for natural disasters, there is an increase of $1.9 billion between the two years.

Overall, the new fiscal blueprint for the Pentagon writ-large calls for $705.4 billion in Pentagon spending. That represents just an $800 million increase over the enacted 2020 level excluding natural disaster relief and emergency funding, according to budget documents.

This budget delivers “capable capacity within the constraints of our budget top line,” said Deputy Assistant Secretary of the Navy for Budget Rear Adm. Randy B. Crites.

The service is moving from 293 battle force ships today to 306 by the end of fiscal year 2021, he said during a briefing with reporters at the Pentagon.

“This budget adapts the force to reflect key changes in the security environment,” he said. Crites pointed to adversaries such as China, Russia, North Korea and Iran as maritime threats it must counter.

However, the department’s overall procurement account decreased by 8.3 percent in order to fund increases in operation and maintenance (3.8 percent), military personnel (6.4 percent) and research-and-development (5.1 percent) accounts, according to the budget document.

“This budget request will deliver a larger more ready and more lethal force in FY 2021 as compared to the force we have today — but it will take significant topline increase for any significant accelerated growth,” the budget document said.

Shipbuilding took a hit, with a funding decreasing from $24 billion to $20 billion between fiscal years 2020 and 2021, according to the document.

The budget cut one of two Virginia-class submarines and reduced its total ship purchase from 55 to 44, according to budget documents.

Bryan Clark, a senior fellow at the Center for Strategic and Budgetary Studies, a Washington, D.C.-based think tank, said the proposal to cut funding to shipbuilding wasn’t a surprise. “Operations and maintenance costs for the Navy has increased faster than anybody had projected,” he said in an interview. To balance that, cuts will need to be made to both shipbuilding and aviation coffers, he said.

“If the budget's flat and your operations and maintenance is going up and your R&D is ... going up as well then something's got to give,” he said.

However, Clark was surprised to see a submarine on the chopping block. “The Navy makes the point a lot of times about how it's the sort of key capability to go up against anti-access powers like the Chinese and important to deal with the ... Russian submarine threat, which we perceive as kind of being one of Russia's main tools for deterrence and for aggression,” he said.

In light of that, it seems as if a submarine is the last platform the service would cut, he said. However, the Navy may believe that the submarine industrial base can handle the loss of one Virginia-class boat given there are other high-profile priorities coming down the pipeline including the Columbia-class ballistic missile submarine.

“They probably felt like reducing by one submarine is something that that industrial base can absorb probably without as much of an impact on workforce, … [as opposed to] if they took that out of a surface ship construction where you would have to take out two destroyers to really get the same kind of cost benefit,” Clark said.

In its most recent force structure assessment from 2016, the Navy indicated that it was moving toward a 355-ship Navy. Vice Adm. Ron Boxall, director of force structure, resources and assessment for the Joint Staff, said the service is still committed to that number.

“355 is the law,” he said. However, “you have to kind of slow down your rate of acquisition programs to balance the budget.”

The service is facing a flat budget, which means that tough choices had to be made, he added.

Acting Under Secretary of Defense Comptroller Elaine McCusker noted that the Navy is working to balance procurement funding with other accounts like operation and maintenance to ensure the force is not hollow.

“We're very focused on getting our current fleet to sea,” she said.

With the next iteration of the Navy’s force structure assessment due out in the spring following several delays, it is likely that the Navy will tweak it to include more unmanned platforms, Clark noted.

A 355-ship Navy is “probably not going to be the requirement that comes out of the Navy force structure analysis — and this budget doesn't take you closer to it anyway,” he said.

Instead, the 2021 budget request focuses more on new technologies that will one day enable unmanned systems to take the place of manned platforms, he added.

“This budget kind of represents a down payment on that rebalanced future fleet instead of kind of sustaining the old model,” he said. “It's this transitional budget, and as a result, it doesn't really tend to be closer to this old requirement of 355 manned ships. It takes you closer to whatever that new requirement is, which is probably a mix of manned and unmanned vessels.”

Crites noted that while the force structure assessment will not likely change anything in the 2021 budget in the near term, it could over the future years defense program. “It absolutely could … change that,” he said.

Meanwhile, the Navy requested a 5 percent increase to its research-and-development coffers for 2021. That will “promote increased lethality and better capability through innovation,” Navy budget documents said.

That will include funding for its Columbia-class sub development and shipbuilding efforts such as the Gerald R. Ford-class aircraft carrier, guided missile frigate and future large surface combatant vessel. Additionally, it funds robotic platforms including the large unmanned surface vessels, which will ultimately serve as a sensor and shooter platform, budget documents said. The service plans to procure 10 over the future years defense program. However, that will transition to the shipbuilding account in 2023. Further, there are also plans to procure six extra-large unmanned undersea vessels, where the service is focusing on payload integration.

Putting more funding toward research and development is an important move, Clark said.

“There are a lot of new enabling technologies that are needed for this fleet rebalance the Navy is looking to pursue, and that R&D increase was going to be essential to that,” he said. These technologies include unmanned systems, hypersonic weapons, high-powered microwaves and directed energy platforms.

For example, in 2021 the service requested $1 billion toward its conventional prompt strike effort. The “program develops warfighting capability to enable precise and timely strike capability in contested environments across surface and sub-surface platforms,” budget documents said. The missile will be comprised of a common hypersonic glide body and a 34.5 inch two-stage booster, the document said. The service is planning for initial operational capability in fiscal year 2028 in which the missile will be fielded on a Virginia-class submarine with the Virginia Payload Module.

The service’s R&D budget request includes $397 million for the Columbia-class submarine to support propulsion plant and nuclear technology development, common missile compartment design and prototyping, and platform development and vendor qualification for technologies such as the propulsor, strategic weapons system and maneuvering and ship control. However, 2021 R&D funding for Columbia decreased over 2020 as the platform transitions from component development to shipbuilding construction funded detailed design and construction efforts.

Meanwhile, to fund increases in the O&M, research and development and military personnel accounts, there were also cuts to the aviation budget which went from $19.7 billion to $17.2 billion, a 12.7 percent drop.

Clark noted that this was to be expected because the service is nearing the end of its planned buy of P-8 Poseidon maritime patrol aircraft.

Overall, the service is planning to procure total 121 aircraft in fiscal year 2021 and 537 aircraft over the future years defense program. Key investments include the final 24 F-18 Super Hornets in 2021 and production of the F-35C joint strike fighter.

When it comes to maintenance, the Navy is planning to boost its funding by 2 percent, Crites said. “We’re committed to better predictability and maintenance of our ships,” he said. “This is an all hands-on deck effort as we look at analytics to close our performance gaps.”

Predictable and stable funding is crucial to incentivize private shipyard performance and growth, he added.

Additionally, the budget calls for an increase in military personnel for the Navy, with a request for $34.3 billion. That will fund an end strength of 347,800 personnel and continues the service’s focus on recruiting, developing, retaining and promoting sailors. That number is 7,300 more personnel than in fiscal year 2020.

Well that will surely help them reach the 355-ship goal. Jesus.

sferrin at 8:43 AM
Re: BUDGET 2021: Navy Proposes Slashing Shipbuilding Budget by $4 Billion