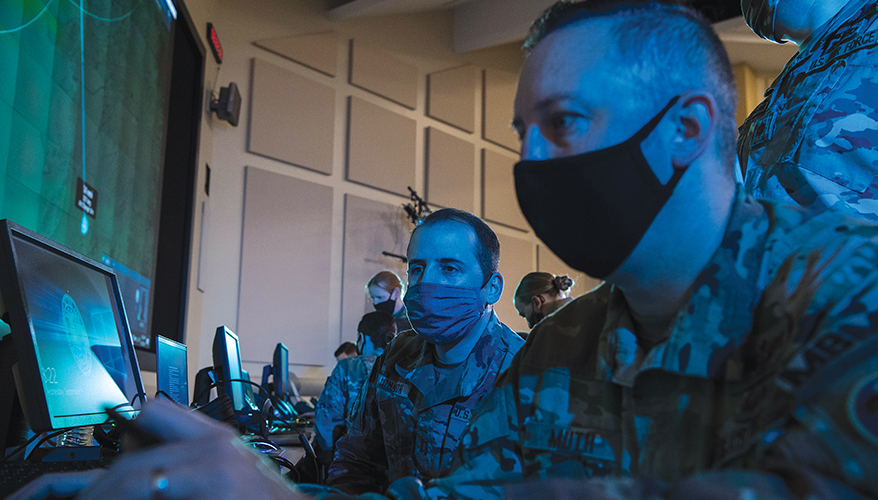 The Defense Department is making progress developing a vast network of internet of things that will connect the services’ platforms, but the initiative still faces some hurdles.

Joint all-domain command and control, or JADC2, is envisioned as a way to better link the armed forces’ sensors and shooters on the battlefield. The Air Force has taken the lead on the effort through the development of its Advanced Battle Management System, or ABMS, and has already held high-profile “on-ramp” exercises this year where it has worked alongside industry to test numerous technologies.

A key part of joint all-domain command and control will be “the structure of the data, publishing it so it’s available and then making it so that you can subscribe to it and you can pull that data and … build your own common operational picture any way you want,” he said.

The services must make information available via resilient networks and then control who can have access to it, Brown said during the National Defense Industrial Association’s virtual JADC2 & All Domain Warfare Symposium, which was held in partnership with Texas A&M University in October.

That kind of rapid information sharing and connectivity is already happening in the commercial world every day, he said.

“One of my own means of accessing data is via my phone,” Brown said. “I have the ESPN app. … I can swipe the options to track my favorite team, like the Cowboys. The app will send me alerts about injury updates, changes in the roster or even scores in real time.”

ESPN publishes information about all the NFL teams and many other sports via the company’s app, he noted. But Brown only signs up to receive the updates that matter most to him.

“We have to do the same thing with all the data we leverage as a military,” he said. “The services and partners [should] publish data to the central network so the joint force and our allies can subscribe to the data and they can use it.”

That will require the services to trust one another’s validation of an application, program or tool, he noted.

The Air Force is working alongside the Army as it pursues combined JADC2 and recently entered into a memorandum of understanding to “build the interconnected digital infrastructure needed to allow our services to bring each of our capabilities to the flight and still connect to one another,” Brown said.

In an interview with National Defense, Chief of Staff of the Army Gen. James McConville said combined JADC2 pivots the services toward transformational change. The military recently began using a modified acronym, CJADC2.

“We’ve added a ‘C’ … because we recognize the importance of working with our allies and partners, whether it’s in a competition phase [with potential adversaries] or it’s in the conflict phase,” he said. “We want to make sure they’re included, and they want to be included.

“This is going to set the stage for how we’re going to compete, deter and — if required — fight for maybe the next 40 years,” he added. “This is extremely important and I’m very appreciative of the Air Force working closely with us.”

The Army is pursuing JADC2 through its Project Convergence initiative which is being billed as a “campaign of learning,” according to the Congressional Research Service. It is designed around five key elements including command and control, information, weapons systems, soldiers and terrain.

Army Futures Command plans to run the project on an annual cycle, the report said. A recent exercise took place at Yuma Proving Ground, Arizona, in August and September which involved 500 personnel. The event — known as PC20 — focused on key objectives including: change how the Army fights by shaping how it organizes for combat; highlight ways to optimize operational processes; evolve how the Army visualizes, describes, decides and acts on enemy threats; and build soldier and leader trust in emergent technologies, according to CRS.

“PC20 concentrated on what the Army calls the ‘close fight’ by integrating new enabling technologies at the lowest operational level so that tactical networks could facilitate faster decisions,” the report said.

“The results were remarkable,” Army Secretary Ryan McCarthy said during a speech at the Association of the United States Army’s annual conference in October.

Additional Project Convergence events are planned. Draft objectives for the 2021 exercise include demonstrating a cloud-based network delivering the right data to the right place at the right time, and interoperability across Army and other services’ systems to enable joint all-domain operations, according to CRS.

While there is broad support for JADC2, there are both policy and technical challenges ahead of it, said Space Force Lt. Gen. B. Chance Saltzman, deputy chief of space operations, cyber and nuclear.

Saltzman, who was a key part of the Air Force’s multi-domain command-and-control concept, or MDC2, which eventually became joint all-domain command and control, said the military is on the right track.

“Things like the accessibility of data, things like resilient self-healing networks — these are foundational principles, foundational capabilities and I see those in the ABMS on-ramps,” he said during an online event hosted by the Mitchell Institute for Aerospace Studies. “I see the emphasis being placed on those in future iterations for how ABMS and other JADC2 work is done.”

Saltzman said he’s pleased that the MDC2 team was able to set a foundation of principles that are now being applied tangibly as the services start to develop systems and bring them online.

“What doesn’t make me as happy is how long it takes,” he added. “This is just the nature sometimes I think of a large organization trying to synchronize across multiple fronts, multiple services, multiple budget drills, multiple acquisition projects. … There has to be a level of patience.”

There is a desire to craft common data standards and common data protocols as well as ease integration and lower thresholds so smaller companies can engage with the Defense Department, he noted.

“Those things are hard at first, but as you start to lock those into places you start to build momentum and can go faster,” he said. “That’s what I see in terms of big trending, and now we just got to keep the pressure on.”

But JADC2 is not an easy endeavor, he noted. Sharing information across multiple security layers, harvesting data and then turning it into accessible, discoverable and transportable information is a challenge, he said.

While technically feasible, “we’re struggling to implement [the concept] because of the way we built our data structures, our pipes, etc., inside the Department of Defense,” Saltzman said. “Our links and nodes structure is not really built for cloud-based structures and moving data around like that. We still like direct feeds. We like firewalls.”

There has to be a redesign of how the Pentagon manages its data as well as policy changes to manage security and configuration control, he added.

“You can’t just say, ‘Hey, if Bank of America can move data around … globally, why can’t the Department of Defense?’” he said. “It’s just really not too fair of an analogy when you talk about … adversaries, when you talk about disadvantaged users that are in very austere places without a comm infrastructure to support them, relying on [radio frequency] transmissions and the data throughput that those offer.”

There are also policy considerations which include getting all the services on board, he said.

The Defense Department is already thinking hard about how it can reform its information management policies. To further its digital modernization effort, the Pentagon released a new data strategy in October which laid out numerous guiding principles, goals and objectives as the military works to become a data-centric organization.

In a foreword to the document, Deputy Secretary of Defense David Norquist said improved data management will enhance the Pentagon’s ability to fight and win wars in an era of great power competition with China and Russia.

The success of the department’s digital modernization effort — which includes everything from artificial intelligence to 5G communications — depends on a secure and robust information infrastructure, he said.

Meanwhile, although only the Army and Air Force signed the combined JADC2 memorandum of understanding, Spirk said that does not mean the other services are not interested.

“I have not seen a reluctance in any of the services to not share their data,” he said, noting that he has multiple daily engagements with all of the military departments, chief data officers, senior leaders throughout the joint staff and the combatant commands. “There’s a broad willingness and demand” for more data sharing.

Spirk said the fruits of those discussions and work should be more visible over the next year.

Additionally, he noted that JADC2 isn’t limited to just the U.S. military. The Defense Department recently hosted a call with members of the

“Five Eyes” alliance — which is made up of the United States, the United Kingdom, Australia, Canada and New Zealand — where the concept was discussed.

“All of them were talking about where they are in the development of their chief data officer journeys and how important it would be for that collaboration up front, so that we can set some data commandments, and also build ... some security frameworks,” he said. ND