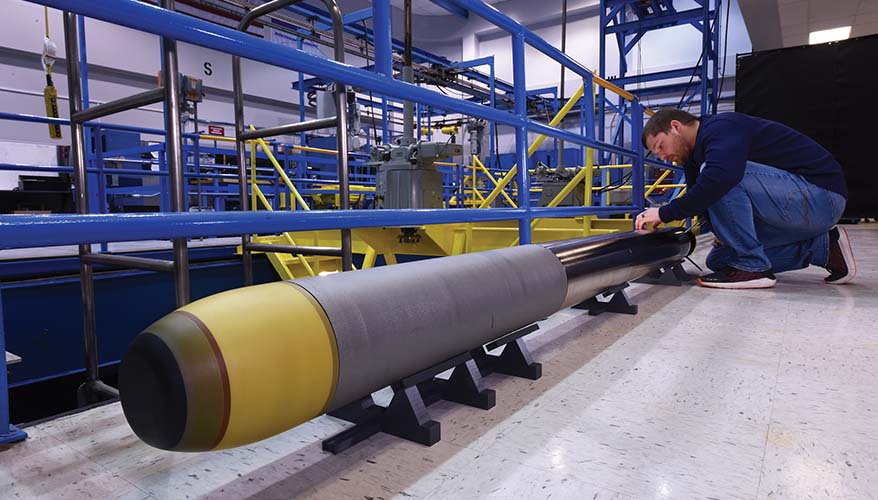 The Navy in January is expected to release a request for proposals to field its first completely new torpedo since the 1990s.

Northrop Grumman has announced its intention to enter the compact rapid attack weapon program, which will seek to find a manufacturer for the prototype of a lightweight torpedo developed at Pennsylvania State University’s Applied Research Laboratory.

“This is a really interesting weapon and with advanced electronics and advanced computing, it’s going to make it extremely effective,” said Dave Allan, director of business development at Northrop Grumman Mission Systems.

Operators will be able to instantly load software into the weapon, giving it defensive or offensive capabilities shortly before being fired, he said.

The compact rapid attack weapon (CRAW) is the offensive version of the torpedo and the countermeasure anti-torpedo (CAT) is the defensive version.

A previous iteration of the Penn State-designed torpedo was fielded as a defensive weapon intended to take out incoming torpedoes fired at aircraft carriers. That program has since been canceled, although the system remains on a small number of carriers, said David Portner, program manager for the very lightweight torpedo at Northrop Grumman.

The submarine community expressed an interest in the technology because of its size and weight, he said. Northrop Grumman has invested internal research-and-development funding to improve the design.

“The nice thing about it is it’s about one-third the size of the existing Mark 54 [lightweight] torpedo,” he said. That weighs about 600 pounds.

“The submarine force recognized that having this very capable torpedo on a submarine would allow them to increase the weapons load without impacting the size of the torpedo room, because this weapon will fit into the six-inch launcher devices,” Portner said.

Meanwhile, Navy aviators see the potential of having a lightweight, quickly configurable torpedo for its anti-submarine warfare aircraft.

“The Naval air community is very interested in this because its lighter weight will allow their current ASW platforms to carry more of the units without impacting their range or endurance,” Portner said.

Beyond that, it would also be a potential munition for the service’s envisioned fleets of unmanned surface or underwater vehicles, Portner said.

“Those vehicles are typically limited in power and capacity, so a smaller, lighter weight torpedo could be employed more easily into those platforms,” he added.

The Navy is using an other transaction authority agreement to compete the program, which will seek to transition the Penn State prototypes to large-scale manufacturing.

The transition design period will take about three years meaning production could begin around 2024, Portner predicted. –

Re: Navy to Field First New Torpedo in Decades

Will it require a sabot to be used in current submarine tubes?

Jim Oss at 10:56 AM
Re: Navy to Field First New Torpedo in Decades

Available for Ukraine's use in the Black sea vs Russian ships?

Jme at 8:53 PM
Re: Navy to Field First New Torpedo in Decades

There are more targets than the are torpedos in US subs and most of these targets don't need a 1000lb warhead. If many VLWT could be packed into a single 21" than the USN will finally have a weapon to target small PLA Navy ships like cutters, corvettes, missile boats, auxiliaries and trawlers. The VLWT would serve the same purpose as the WWII deck gun.

John Stuart at 1:40 PM
Re: Navy to Field First New Torpedo in Decades

Can it be wire guided? Will it have the same speed and range of the Mark 54? It seems to me that it might not be able to carry a warhead that packs the same explosive force as the Mark 54. Being smaller, I doubt it would be able to carry enough fuel to do the same job as the Mark 54. And finally, what was the matter with the existing torpedo that the Navy felt it needed to be replaced? Or is this one of those “change for changes sake?” Which I despise. A suggestion: A better idea, if you want to replace the Mark 54 for better performance, would be to develop a rocket propelled torpedo that once launched like any other torpedo, would ignite its rocket motor. It would have the same target seeking ability but have vastly higher speed and thus no target could outrun it nor evade it.

Larry Ray at 2:04 AM
Re: Navy to Field First New Torpedo in Decades


Lynn Davis TMC SS at 12:29 AM
Re: Navy to Field First New Torpedo in Decades

Marc Tomiuk at 3:43 AM
Re: Navy to Field First New Torpedo in Decades

Richard at 5:15 AM
Re: Navy to Field First New Torpedo in Decades

Richard at 5:18 AM
Re: Navy to Field First New Torpedo in Decades