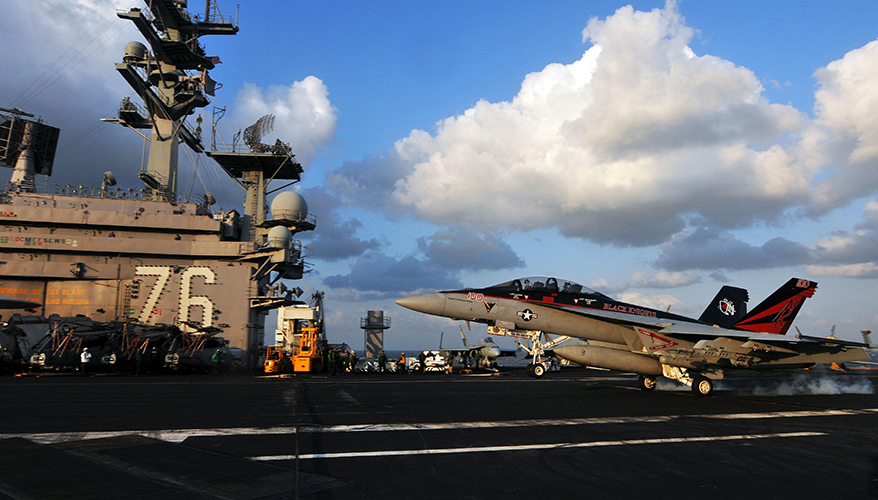 The Defense Department will soon release a new guide to help engineers and the acquisition community as they pursue new capabilities for the military.

The initiative comes as the Pentagon is trying to implement the 2018 National Defense Strategy and engage in great power competition with China and Russia.

“The department has been really sorting through how do we get more intelligent and mindful about the things that we're investing in and how all of those things play together to accomplish the missions that we're going to need them to be accomplishing,” said Sandy Magnus, deputy director for engineering in the office of the undersecretary of defense for research and engineering.

That’s where mission engineering comes in, she said in a Nov. 3 interview with National Defense.

While systems engineering involves using analytics and quantitative investigations to understand how systems work and how to build them, mission engineering takes that concept to another level to examine “systems of systems,” she explained.

“Now we're trying to take that same paradigm, if you will, and apply it to missions and break down the missions into piece parts, understand how the systems of systems have to work together, and then try and take that information about the relationship between those piece parts and understand those rig issues so we know we're investing in the right things,” she said.

Mission engineering is a complement to systems engineering, not a substitute, she noted.

Mission engineering isn’t new to the Defense Department or industry, Magnus said, but a better common understanding is needed.

“What the department is really trying to do now is to take this method and sort of create a discipline around it that’s standardized across the department, so that when we now talk about mission engineering, we're all on the same page,” she said. “That's really what the guide is all about.”

After taking her post at the Pentagon, Magnus realized not everyone was using terminology in the same way, for example.

Earlier this year, the Pentagon created a working group of officials from across the services to get after the problem. The group, which has been at work for six months, has come up with about 75 definitions of key terms that will be part of the guide, she said.

The document is expected to be released by the end of November.

While the new guide was primarily created for engineers, it could also aid the acquisition community.

For example, mission engineering studies could help acquisition officials understand how their “chain of widgets” can be put in sync as they manage their portfolios, Magnus said.

“If for some reason one of the widgets — one of the systems in the system of systems — can't really be realized the way it needs to, you can immediately understand the impact on the whole mission and adjust the other pieces of the system accordingly,” she said. “It's a very powerful tool.”

The studies could also help operators grasp how the various systems being delivered to them can best be employed to achieve their missions, and aid strategists and policymakers in understanding how the broader ecosystem of capabilities “plays together,” she added.

The guide will be released at a time when the military services are pursuing a new joint all-domain command and control, or JADC2, initiative to link their various sensors and shooters in preparation for a potential high-end fight against advanced adversaries. Mission engineering could be an important tool in this effort, Magnus said.

“You can look at something like JADC2 and your brain just blows up because it's so complicated,” she said.

JADC2 is about having the ability to do command and control and move data across the operating environment where it needs to go, she explained.

“Those are all elements that have to be solved across any particular mission space to make JADC2 work," Magnus said. "If I was going to design a mission engineering study around JADC2, what I would do is I would break it down into a very simple problem first in order to get to the whole."

For example, analysts could look at how an aircraft carrier would operate alongside other assets.

“You've got the carrier, you've got the airplanes, you've got what other ships are in the battle group. You might have some other comm assets in the scenario flying overhead. So there's your physical platforms," she said. "Now you think about what kind of a battle might ensue. And now you can start playing with an analysis on what kind of data needs to move, where, when, with what feed. And … at the end of that study, you've slowly defined a little piece of JADC2 for a specific scenario."

That mission engineering effort could yield important information for defense officials trying to design systems-of-systems architectures, including the most effective means and processes of transmitting data.

“It feeds right into what capabilities you need to build and what requirements your systems have to meet," she said.

While the guide is primarily intended to get defense officials on the same page, it could also enable a “more coherent conversation” across the Pentagon and industrial base workforces about mission engineering, Magnus said.

Additionally, it could help contractors, including nontraditional partners, pitch their products to the Pentagon, she added. “If it's something that they're using as a tool to explain to the DoD why their particular technology can be brought to bear to satisfy mission needs, it gives them a vocabulary to match the vocabulary that the DoD is using.”