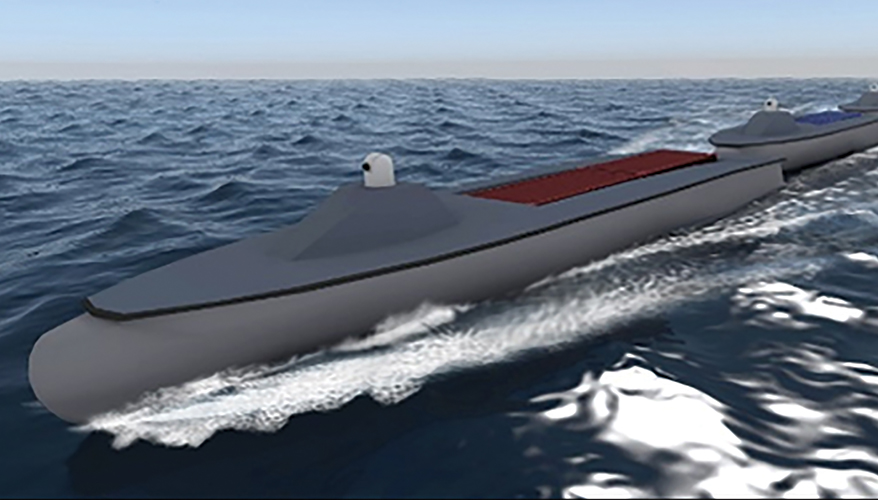 In September, Applied Physical Sciences Corp., Gibbs & Cox Maritime Solutions and Mar Technologies were chosen for the program, which will include two 18-month phases.

The contract awards’ total potential values were $31.2 million, $30.4 million and $28.5 million, respectively. Through the effort, DARPA wants “to provide some operational flexibility for medium-sized unmanned surface vessels,” said Andrew Nuss, a program manager within the agency’s tactical technology office. Each company is “developing a unique approach to be able to address the goals of the Sea Train program.”

Unmanned surface vessels are generally limited in operational range, typically 3,500 to 4,000 nautical miles, he said in an interview. However, DARPA hopes to extend that to about 14,000 nautical miles under the Sea Train program.

“It’s sort of a vicious cycle at that point, where you’re constantly chasing efficiencies and whatnot,” he said. However, a Sea Train platform — which is expected to be 40 meters long and carry a 35-ton payload — could give an operational commander “the flexibility to deploy these highly capable medium-sized unmanned surface vessels from many different locations without having to rely on … refueling operations.”

DARPA plans to extend the range of USVs more efficiently by creating a “train” in which four autonomous vessels are physically connected until they reach their destination.

The platforms would then detach, conduct their individual operations and then reconnect before returning to their starting point, Nuss said. Unmanned boats must overcome resistance and friction from waves as they move, but attaching the platforms may help increase their efficiency and allow them to travel longer distances, he said.

“By physically connecting multiple vessels together, and extending the length of that interconnected system, we could move — in our case — four vessels with ... approximately the same efficiency of a single vessel,” Nuss said.

The medium-sized platforms were picked for proof of concept, but the idea could be applied to smaller vessels or manned systems as well, he noted.