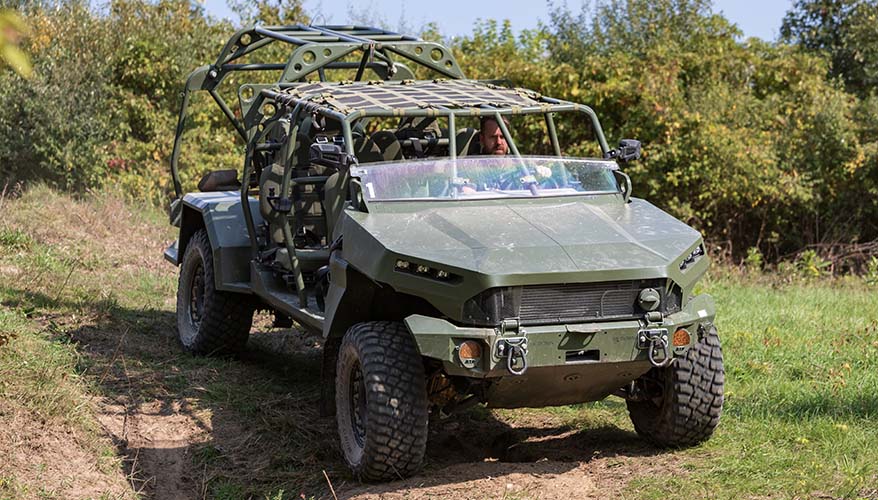 The Army received the first batch of its new Infantry Squad Vehicles on Oct. 27 from GM Defense just 120 days after awarding the company a contract for the capability.

The firm was awarded a $214.3 million deal for the program in June.

The initial delivery of four vehicles comes as part of the Army’s effort to fast-track the acquisition of an all-terrain, highly transportable platform intended to provide ground mobility capabilities for infantry brigade combat teams.

The “ISV is a light and agile all-terrain troop carrier which is intended to transport a nine-soldier infantry squad moving throughout the battlefield,” GM Defense President David Albritton said during a delivery ceremony at General Motors' Milford Proving Ground in Michigan

The company's offering is based off the Chevrolet Colorado ZR2 midsize truck and leverages 90 percent proven commercial-off-the-shelf parts. It can be sling-loaded from an Army UH-60 Black Hawk helicopter and fit inside a CH-47 Chinook aircraft for transportability.

In 2019, the Army selected GM Defense, an Oshkosh Defense-Flyer Defense team and an SAIC-Polaris partnership to build two prototypes each for the ISV program. Each team was awarded a $1 million other transaction authority agreement to build the vehicles. OTA agreements enable the Defense Department to cut through some of the bureaucratic red tape associated with the Pentagon’s traditional acquisition system and facilitate rapid prototyping.

GM Defense won the down-select and will manufacture 649 ISVs. The company will support the production of up to 2,065 vehicles with additional authorization over eight years.

The first 27 trucks will be built at the Milford Proving Ground in Michigan. Production will later move to a facility GM Defense is standing up in Concord, North Carolina.

Moving forward, the company is interested in competing for a number of military programs including a future joint light tactical vehicle contract, Albritton said. Oshkosh Defense is the current manufacturer of the JLTV.

GM Defense is also interesting in using its capabilities for other applications including a potential new propulsion system for the Navy’s unmanned underwater vehicles, Albritton noted.

“There is a wide variety of things that we can look at across the wide capabilities of GM and apply them in different contexts," he said. “We're looking widely at those opportunities.”

The company returned to the defense market in 2017 after a long hiatus that began when a previous iteration of GM Defense was sold to General Dynamics in 2003. The ISV program is the first major military award for the contractor since the subsidiary was reestablished by its parent company.

Editor's note: This story has been updated to reflect that the new ISVs will be built in Concord, North Carolina. GM Defense officials previously misidentified the location.

Great news for the US Army Airborne and Light Infantry!

Public commentators, however, do have some valid reservations. Some commentators state that since HMMWVs don't drive outside Garrisons, how then will the ISVs survive against hostile fire? Another commentated said that dust, dirt, and debris will fly into the faces of the seated soldiers unless they wear maxillofacial coverings similar to helicopter pilots or the ISVs have rubber mudflaps installed.

Since the ISVs are airdropped, I suppose the ISV is better than a HMMWV. I would recommend that the US Army adopt the German Wiesel 2 AFVs or Israeli Mantis 4x4 for C4ISR, SHORADS, mortar, Radar, and ATGM, giving the Light Infantry and Airborne an unarmored ISV, a lightly armored AFV against 7.62mm AP rounds and with greater supporting firepower, and better armored LAV-25s proof against 14.5mm AP and armed with 25mm cannons until the 105mm MPFs land and assist. The US Army has tested the Wiesel 1, and shied away from it as being too light or cramped or unarmored. The Wiesel 2 will be better, and really, something needs to fire-support the ISVs as they zoom across. The lightly armored Wiesel or Mantis would be ideal.