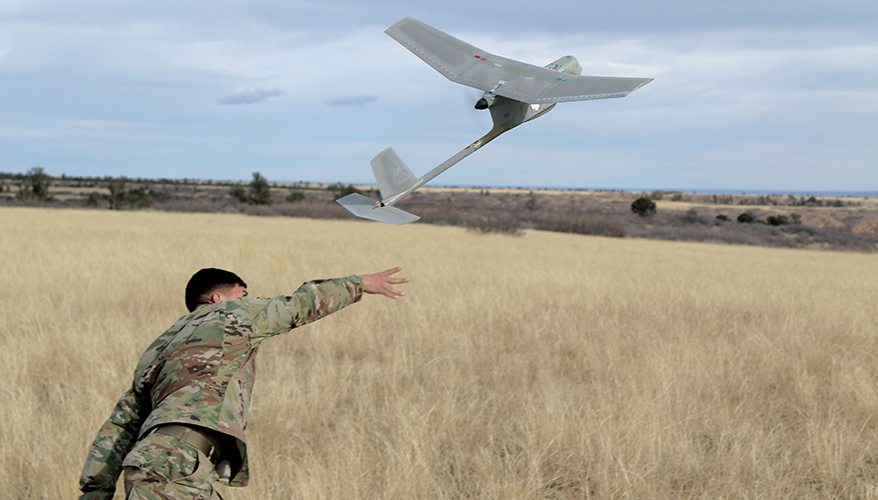 To stay ahead of near-peer competitors, the Defense Department is advancing the development of a variety of robotic systems and boosting their autonomous capabilities by leveraging artificial intelligence.

“We believe that we have adversaries who are rapidly building up their forces … and are definitely applying AI to their operations,” said Nand Mulchandani, chief technology officer at the Pentagon’s Joint Artificial Intelligence Center.

Artificial intelligence can aid the military in reducing costs, enhancing operational efficiency, improving healthcare outcomes for soldiers and enabling new weapons systems, he said in an interview with National Defense.

AI is usually at the top of the list for military leaders and lawmakers when they speak about defense technology modernization priorities, he noted.

The work the command is doing in AI will also benefit the joint force as a whole as its systems “flow” to the other services, Babbitt said during a panel at the Special Operations/Low-Intensity Conflict conference, which was hosted by the National Defense Industrial Association. The event was held virtually this year due to the COVID-19 pandemic.

“We’re working toward building tactical partners that can mitigate the danger to our operators and handle a lot of the tactical load,” he said. “As we work with industry to solve these ... problems, the solutions that we come up with can immediately transition out to the big services.”

The command is using autonomous systems in areas where it cannot necessarily operate manned platforms, he said. “We’ve got loitering missiles, precision strike systems that are helping us to identify targets and strike them themselves when an aircraft can’t necessarily be present.”

The command is working to expand autonomy specifically on its unmanned aerial systems that perform intelligence, surveillance and reconnaissance missions, Babbitt said.

Flight-enabled behaviors such as a drone’s ability to autonomously dodge obstacles are “absolutely critical,” he said.

“We have to move beyond those baby steps to full autonomy, to where the operator doesn’t have to enable the drone. Instead, we need to get to the point where the drone acts as a tactical partner with the operator, much like another operator would,” he said. “We need partnering drones to enable tactics, techniques and procedures that allow us to move faster in tactical situations by seeing more.”

Unmanned systems of the future will need to be outfitted with autonomous technology that can provide video, other imagery and increased tactical understanding of objects through recognition and classification with the ability to locate targets when needed, Babbitt said.

“A big delay in any tactical operation is trying to get an understanding of the situation and all of the threats within that situation,” he said. “We need drones that turn standoffs into victories faster, and we also need independent drones that enable broad situational awareness over a larger tactical or urban area.”

Meanwhile, in the land domain, testing is underway for one of the Army’s high-profile autonomous robotics programs. Next-generation combat vehicles are the Army’s No. 2 modernization priority, second only to long-range precision fires.

The service deemed its first experiment incorporating heavy robotic combat vehicles into its units a success in August despite not all of the technology functioning as planned. It is planning to create a family of robotic vehicles that will include heavy, medium and light variants.

The five-week training event, which began in July and wrapped up in August, was part of the Army’s multi-year plan to experiment with unmanned combat vehicles as it moves toward establishing a program of record. The service views robotic systems as tools to keep soldiers out of harm’s way and free up manpower for other tasks.

To reduce the cognitive burden on soldiers, the service is looking for a level of autonomy that gives the vehicles the ability to perform routine tasks.

However, the current limitations of AI have presented a new set of hurdles to overcome, such as their inability to recognize depth, said Army Maj. Cory Wallace, robotic combat vehicle lead for the next-generation combat vehicle cross-functional team.

When a robot “looks at a puddle, it doesn’t know if it’s the Mariana Trench or if it’s two inches deep,” Wallace said during a press briefing. “It’s something that we as human beings can contextualize but a robot has a hard time doing it.”

While sensors can detect solid obstacles, they have a long way to go before they’re able to determine depth of “negative obstacles,” such as pools of water and ditches, said Jeffrey Langhout, director for Army Combat Capabilities Development Command’s Ground Vehicle Systems Center.

Although the technology has challenges to overcome, robots will eventually have a strong presence on the battlefield, Brig. Gen. Richard “Ross” Coffman, director of Army Futures Command’s next-generation combat vehicle cross-functional team, predicted.

As the Army works on its ground-based robotic capabilities, the Navy is testing a new integration lab to boost autonomous systems. The sea service has been hard at work over the past years building a new family of unmanned surface and underwater vehicles through a variety of prototyping efforts, Capt. Pete Small, program manager for unmanned maritime systems, said during the Association for Unmanned Vehicle Systems International’s Unmanned Systems conference in September.

The Rapid Integration Autonomy Lab, or RAIL, is envisioned as a place where the Navy can bring in and test new autonomous capabilities for its robotic vehicles. “Our Rapid Autonomy Integration Lab concept is really the playground where all the autonomy capabilities and sensors and payloads come together, both to be integrated … [and] to test them from a cybersecurity perspective and test them from an effectiveness perspective,” Small said.

Meanwhile, the Navy is making strides within its unmanned portfolio.

The Navy — working in cooperation with the office of the secretary of defense and the Strategic Capabilities Office — has Overlord prototypes.

“Our two Overlord vessels have executed a range of autonomous transits and development vignettes,” he said. “We have integrated autonomy software, automation systems and perception systems and tested them in increasingly complex increments and vignettes since 2018.”

Testing so far has shown the platforms have the ability to perform safe, autonomous navigation in accordance with the Convention on the International Regulations for Preventing Collisions at Sea, also known as COLREGS, at varying speeds and sea states, he said.

“We are pushing the duration of transits increasingly longer, and we will soon be working up to 30 days,” he said. “Multi-day autonomous transits have occurred in low- and high-traffic density environments.”

The vessels have already had interactions with commercial fishing fleets, cargo vessels and recreational craft, he said.

Both Overload platforms are slated to conduct extensive testing and experimentation in fiscal year 2021, he said. The tests will include increasingly longer transits with more complex autonomous behaviors. The Sea Hunter USV system will also be undergoing numerous fleet exercises and tactical training events in 2021.

Leidos developed the first Sea Hunter under the Defense Advanced Research Projects Agency. It was christened in 2016 as part of the agency’s anti-submarine warfare continuous trail unmanned vessel program.

The Sea Hunter II is currently under construction at a plant in Gulfport, Mississippi. Leidos has created a “hub” for unmanned surface vessel development in the region, with testing and integration in Long Beach, Mississippi — just a few miles from the Gulfport plant — to produce robotic ships, Dan Brintzinghoffer, vice president of maritime business development at Leidos, said in an interview.

The Navy will use Sea Hunter and Overlord systems to exercise “control of multiple USVs, test command-and-control, perform as part of surface action groups and train Navy sailors on these platforms, all while developing and refining the fleet-led concept of operations and concept of employment,” Moton said.

As the services move forward with AI technology testing and integration, the issue of permissions and authorities with regard to autonomous systems will also need to be addressed, said Brian Losey, a general partner at Shield AI, an artificial intelligence company.

“One of the key things to remember is the permissions and authorities that humans give machines — and that trust envelope — will be driven by that group that has the most advanced AI technology, the most proven technology,” he said during the SO/LIC conference. “If the U.S is in the lead with respect to implementing its AI, it could be more conservative in rendering its permissions and authorities.”

The United States can’t afford to fall behind in the AI race, Losey said.

“This is why we talk so clearly ... with respect to the need to move quicker, take advantage of the available envelope, prototype and field rapidly,” he said.
­