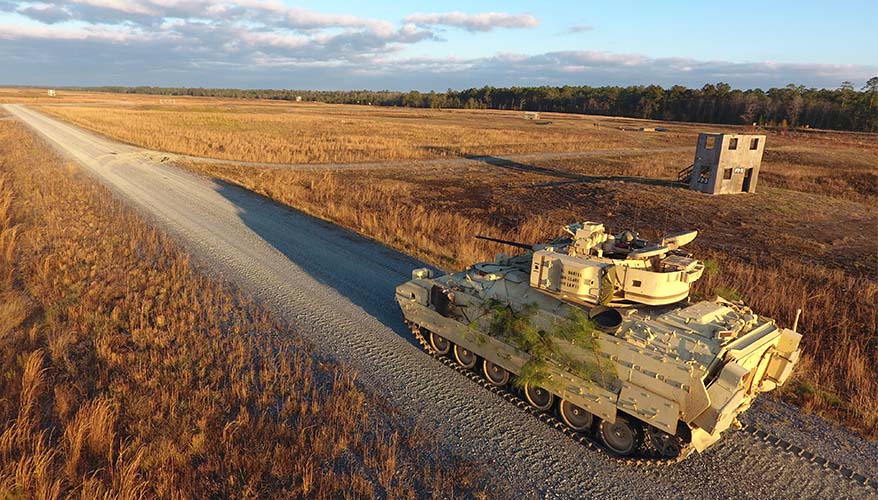 The Army’s future optionally manned fighting vehicles may have the ability to recognize potential targets, according to a service official.

This capability gained more exposure during the service’s recent technology demonstration dubbed Project Convergence. During the event, which wrapped up in September, the Army explored the idea of using artificial intelligence to analyze information gathered from sensors so soldiers could make a decision on whether or not to attack a potential target.

Brig. Gen. Richard Coffman, director of the next-generation combat vehicle cross-functional team at Army Futures Command, said he expects companies to also prioritize this feature in their design submissions in the later stage of the optionally manned fighting vehicle, or OMFV, competition. The platform is intended to replace the Bradley.

“We believe that we will see from industry aided target recognition, that we will see open systems architecture,” he said during an interview Oct. 21. “Those items will inform the OMFV characteristics going forward in the second [request for proposals]."

In July, the Army released a draft RFP. The service plans to release a final RFP in December and then downselect to five companies, Coffman said. Another RFP for more detailed designs and prototypes will be released in the third quarter of 2022. Three companies will be picked to continue in the competition before the service chooses a final winner. A milestone C decision is slated for the first quarter of 2027, and first-unit equipped is scheduled for 2028.

However, the Army is shying away from laying out concrete requirements for industry at this time, he noted. In January, the service cancelled its solicitation for the middle tier acquisition rapid prototyping phase of the program, choosing instead to revamp its acquisition strategy and restart.

“In the first effort for OMFV — before the solicitation was cancelled — we had very specific requirements that we asked from industry,” Coffman said. “What changed in the second iteration is we're starting very broad. We're not assuming that we're omnipotent at the beginning of a very long program.”

Instead, officials have outlined nine characteristics for the vehicle design, which include survivability, mobility, growth, lethality, weight, logistics, transportability, manning and training. This opens the door for contractors to bring forward a variety of designs, Coffman noted.

“Those nine characteristics have been given the industry so that they can provide us innovative and transformational ideas,” he said. “The way we define ‘transformational’ is either something that looks like ... an infantry fighting vehicle, but equipped with technology that allows us to fight collaboratively and faster than we ever have before — or another approach could be that industry delivers a solution to moving infantry men and women on the battlefield in a totally different manner.”

Based on industry feedback, the service plans to reduce the level of detail required from contractors at the beginning of the competition, he noted. The service received over 500 comments following the release of the draft RFP, Coffman said.

“One of their comments was, ‘we recommend that the government only ask for the information that it needs to make a decision on the rough digital design,’” he said. “Industry’s message to us was that we had asked for too much detail. We had asked for quite a bit of detail that we probably didn’t need.”

Defense companies also expressed concerns regarding the government’s choice to enter its own design for the competition, he noted. The Army later backed away from that idea.

“There were a lot of concerns about the government competing for the OMFV program,” Coffman said. “With that feedback from industry and consultation, Army senior leaders made the decision for the government not to compete.”