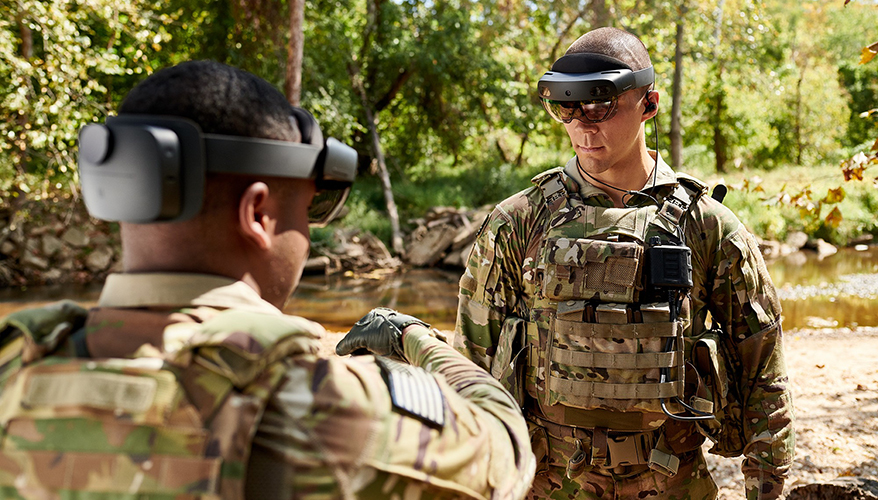 The Army has rapidly developed a next-generation night vision goggle that is being called "transformational."

“In less than two years, we were able to take a great idea from concept to prototype,” Army Chief of Staff Gen. James McConville said Oct. 14. “We combined the efforts of our traditional night-vision goggle partners with nontraditional partners — like computer experts and gamers — to design a transformational platform for our warfighters.”

What started off as a system to improve soldiers’ night vision has become a totally new capability, he said during a speech at the Association of the United States Army’s annual conference, which was held virtually this year due to the COVID-19 pandemic.

The integrated visual augmentation system, or IVAS, is a mixed-reality, heads-up display that overlaps simulated imagery with the real world, according to the Army. It is part of the service’s soldier lethality modernization priority. Soldier lethality is one of six top modernization efforts the Army has underway, including long-range precision fires, next-generation combat vehicles, future vertical lift, the network and air-and-missile defense. The priorities are being spearheaded by Army Futures Command which is based in Austin, Texas.

“It will change how soldiers plan, rehearse and execute operations,” he said.

For mission planning, IVAS can provide technology such as room mapping where soldiers can chart the terrain around them and build tactical plans, he said. For rehearsing operations, the goggles can provide a virtual reality training space that replicates the operational environment.

“Soldiers will conduct rehearsals where, through IVAS, they will see, move and operate,” he said.

And finally, troops will wear the goggles as they execute operations, giving them access to new capabilities, he said.

The platform “can be augmented with tools like real-time video feeds from drones,” he said.

“IVAS will also link the scope of the soldier's weapon and allow them to shoot around corners or over obstacles while staying behind cover,” he said.

McConville expects troops will employ IVAS creatively. “Who knows what else our soldiers can do with this platform in the future?” he said.

The Army is proceeding with the technology via a middle-tier acquisition, rapid prototyping effort, according to the office of the director operational test and evaluation. In 2018, the service awarded Microsoft an other transaction authority agreement for the effort. The program has featured a two-year prototyping period with four capability sets that include software sprints and hardware builds.

In the Army’s fiscal year 2021 budget request, it asked Congress for more than 40,000 IVA systems. However, Congress has yet to pass a full year appropriations bill.

Earlier this year, the Army employed IVAS to better detect symptoms of COVID-19, such as fevers, using thermal sensors, according to the service. 1st Battalion, 29th Infantry Regiment soldiers were screened with the device for fevers at Fort Benning, Georgia.

Army Exploring New Tech to Charge Up Troops on the Go