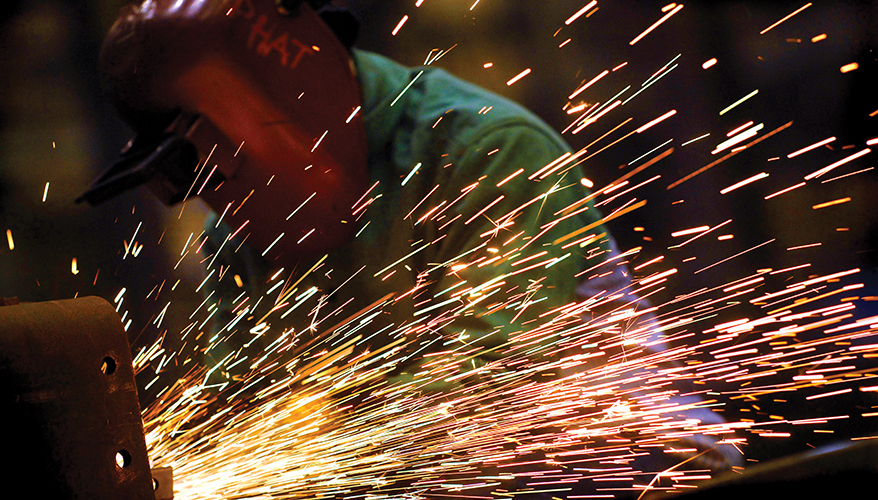 The Executive Order 13806 report on production risks to critical defense industrial supply chains in 2018 starkly framed the health of the U.S. defense industrial base as key to the readiness of the nation’s armed forces to confront near-term threats and their ability to compete long-term against strategic adversaries.

Despite its high-resolution snapshot of the sector’s “unprecedented set of challenges,” the report does not provide the public and the defense policy community an unclassified summary measurement of the health and readiness of the defense industrial base or a simple way of tracking that over time.

To fill this gap, the National Defense Industrial Association, partnering with data science company Govini, has piloted what it plans as an annual project called “Vital Signs.”

The subtitle of the report is “The Health and Readiness of the Defense Industrial Base.” The assessment focuses on standardizing and integrating analyses of different elements of the sector and the business environment shaping its performance.

This year’s mediocre “C” grade reflects a business environment characterized by highly contrasting areas of concern and confidence. Deteriorating conditions in 2020 for industrial security and for the availability and cost of skilled labor and materials emerge from this analysis as areas of clear concern. Favorable conditions for competition in the defense contracting market, and rising demand for defense goods and services reflect recent year-over-year growth in the defense budget.

This first of an expected annual study contributes to the debate about national defense acquisition strategy by offering a common set of indicators — vital signs — of what some have called America’s “sixth service,” the industrial partners providing our warfighters their capability advantages.

To do this assessment, we conducted a months-long study of data from eight different dimensions shaping the performance capabilities of defense contractors including: market competition; cost and availability of skilled labor and critical materials; demand for defense goods and services; investment and productivity in the U.S. national innovation system; threats to industrial security; supply chain performance; political and regulatory activity; and industrial surge capacity.

We analyzed over 40 longitudinal statistical indicators, converting each into an index score on a scale of 0 (bad) to 100 (excellent). We did this over a three-year running average to control for data spikes such as last year’s government shutdown.  Last, we aggregated the individual indicator scores into scores for each dimension, and into an overall composite score for the defense industrial base with 2020 scoring at 77, a passing C grade but with a worrying downward trend.

The indicators of global information security threats were already failing in 2017 and went even lower in 2019. This score incorporates the rising annual average number of new cyber vulnerabilities documented by MITRE Corp., which almost doubled between 2016 and 2018 when compared to 2014-2016. The score also incorporates MITRE’s annual average of the threat severity of new cyber vulnerabilities, which improved slightly for 2016-2018 but remains high. In contrast, intellectual property rights threats scored 100 out of 100 for 2019, the result of new FBI investigations into IP rights violations, which have been steadily declining since peaking in 2011.

Defense industry production inputs also scored poorly in 2019, down from a barely passing 70 in 2017. Major production inputs include skilled labor, intermediate goods and services, and raw materials used to manufacture or develop end-products and services for Defense Department consumption. Relatively low 2019 index scores for defense industry workforce size helped drive the low score for this dimension. The estimate of the size of the defense industry workforce, currently about 1.1 million, falls substantially below its mid-1980s peak size of 3.2 million.

The state of defense contracting competition and the state of demand for military goods and services offer the industrial base a favorable outlook. An analysis of the top 100 publicly traded Pentagon contractors shows competition conditions in the defense industrial base earned a composite index score of 96 for 2019. Several high-scoring indicators drove the strength of market competition conditions, including the availability of cash assets, the low level of market concentration of total contract award dollars, the relatively low share of total contract award dollars received by foreign contractors, and the high level of capital expenditures. Last, the defense industrial base earned a solid score of 88 for profitability for 2019, based on index scores for average return on sales and the average return on assets.

Acquisition expenditures grew in all categories, rising by 11 percent for aircraft, ships and land vehicles, by 33 percent for electronic and communication equipment, 35 percent for weapons and ammunition, 39 percent for sustainment, and 23 percent for knowledge-based services.

Foreign military sales in aircraft, ships and land vehicles also grew by 113 percent between 2016 and 2018, and related services grew by 100 percent.

Conditions in the other dimensions of the defense industrial base conform to the pattern of moderate but declining health and readiness. For example, innovation conditions received a score of 74 for 2019, declining two points from its 2018 score. Accordingly, the U.S. share of global patent applications, a measure of innovation competitiveness, received an index score of 69 for 2019, a 4-point drop from the 2018 score. Similarly, the share of global research and development comprised by U.S. R&D expenditures saw its index score decrease between 2018 and 2019 from 75 to 74.

Political and regulatory conditions earned an overall index score of 79 for 2019, dropping precipitously by 13 points from a 2017 index score of 92. Congressional defense budgeting process indicators helped drive this decline, as their composite index score decreased from 90 for 2017 to 77 for 2019.

Congressional interest in major defense acquisition programs decreased over this same period, as mentions of acquisitions in congressional hearings decreased from 86 in fiscal year 2016 to 18 in fiscal year 2018, echoed in an index score drop from 97 in 2017 to 54 in 2019. Regulatory conditions also eroded between 2018 and 2019, as the index score for our “red tape ratio” of non-restrictive rules to new restrictive rules decreased by 18 points from 100 to 82.

The capacity of the defense industrial base to grow its output and to fulfill a surge in military demand stands as a key test of industrial base health and readiness. Productive capacity earned an index score of 77 for 2019, a 9-point increase above the 2017 index score. Gains in output efficiency and stability in capacity utilization contributed to this rising trend.

Presently, 27.3 percent of critical defense supplier industries (3 of 11) would likely experience shortages in the event of a surge in demand for combat-essential defense programs equivalent to the Carter-Reagan buildup of the late-1970s through the mid-1980s.

The overall defense industrial base health score of 77 suggests satisfactory capabilities to meet current mission requirements, but the fast-moving era of great power competition requires better — the delivery of extraordinary capabilities to maintain and extend eroding capability advantages over our competitors.

Further, the vulnerabilities shown in this study — industrial security and production inputs to include workforce — indicate a need for urgent attention and action. Thankfully, the areas of confidence this study highlights should confirm that the fundamentals of America’s defense industry remain a sound foundation on which to build.  The full Vital Signs report will be available Feb. 5 at NDIA.org/vitalsigns.

Part 4: Industrial Base Could Struggle to Surge Production in Wartime