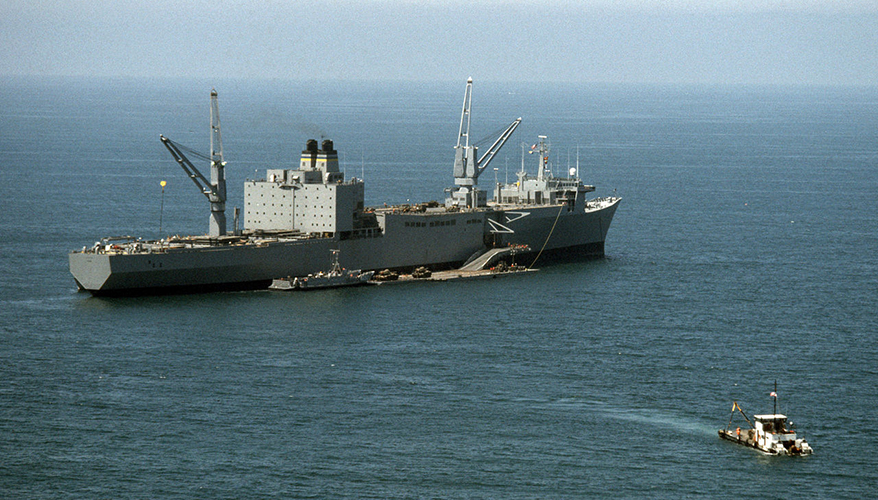 In the wake of a recent readiness test that yielded troubling results, officials in charge of managing the nation’s strategic sealift assets are rethinking how they invest in recapitalization efforts.

In September, the Maritime Administration and Military Sealift Command performed a “turbo activation” to test the readiness of the Ready Reserve Force fleet and other military sealift assets to mobilize quickly for a major contingency, Maritime Administration Director Mark Buzby said Jan. 16 at the Surface Navy Association’s annual conference in Arlington, Virginia.

It was the largest exercise of its kind, he noted. Thirty-nine ships out of a total fleet of 61 vessels were called to mobilize, he said.

Only 64 percent were ready for tasking, and only about 40 percent of the fleet was prepared to conduct operations at the level they were expected to, he said.

That’s a major problem because the military’s sealift capabilities would be critical in the event of a great power war, he noted.

“This is how we move our forces from [the continental United States] to anywhere else in the world,” he explained. “We can stuff some of it in the back of a C-17 [aircraft] but not a whole lot. … If you're going to take real combat power someplace, it's got to be in a ship and it's primarily going to be these ships” performing that task.

The results from last year’s stress test have caused officials to reconsider how they might go about recapitalizing and sustaining the sealift fleet, he said.

“It's driving our thinking as to, is this a workable, sustainable model for the future?” he said.

“We're looking at, maybe it makes more sense rather than invest all our money on the back end and trying to keep ships going and modifying them, … we [instead] partner with commercial operators to build new ships on the front end,” he said.

“We [could] make some investments in military utility on the front end, build that in in the beginning much like China is doing with their merchant marines, and those commercial operators operate those ships for 10, 15, 20 years — whatever is economically viable — and then they roll to us” when the commercial firms no longer want them, he explained.

Those up front investments would aid the commercial shipbuilding industry, he noted.

“We're giving … new ships to commercial operators, and we know we're going to get a ship that we can use on the other end,” he said. “That may be a more viable model in the future.”

Discussions about potentially pursuing this strategy are still in the early stages, he said.

The Maritime Administration’s force is in need of recapitalization, with an average age of 45 years, he noted. They also have outdated technology. Twenty-seven of the 46 ships in the Ready Reserve Force — more than half — are steam powered.

“I have the largest group of steamships in the world right now that I'm not real proud of,” he said. “It's increasingly difficult to find the people that know how to operate these ships.”

For now, the plan for bolstering the aging fleet is three-pronged and includes service-life extensions, purchasing used commercial ships on the open market and building new vessels.

Twenty-six of the ships currently in the fleet will receive service-life extensions to enable them to reach 60 years, Buzby said. Funding for purchasing a small number of used vessels is targeted for fiscal years 2021 and 2022.

“We're trying to accelerate that going on the open market,” he said. “We're probably going to be buying a ship that's in the 18 to 22-year [old] range, which would be a brand new ship to me” relative to the ones currently in the fleet, he said. “We're working with the Navy on that.”

The Maritime Administration is part of the Department of Transportation, and it will have to compete with the Navy’s high-priority modernization programs to get the resources it needs to acquire new-build ships from the industrial base, he noted.

Buzby sounded a note of pessimism in this regard.

“I have no illusions, and not high expectations on this,” he said. “I’m a realist.”