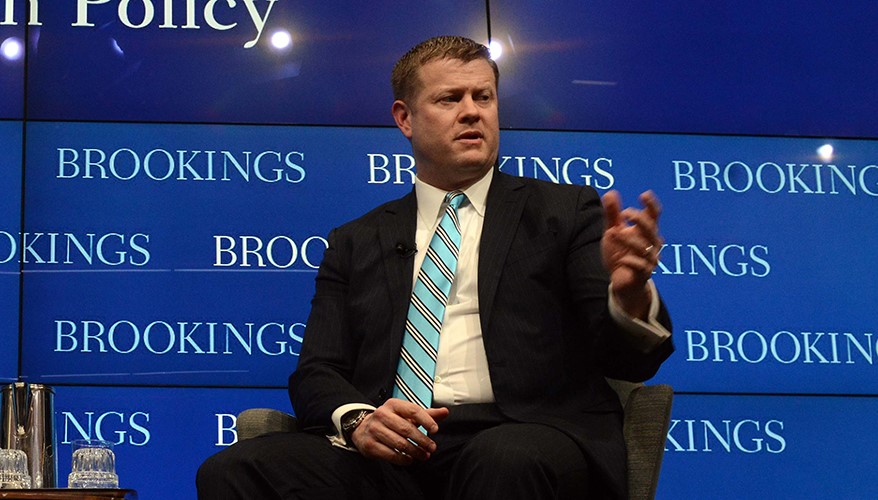 Defense contractors need to invest some of their own money to make sure they are ready to produce hypersonic and counter-hypersonic systems in large quantities when the technology matures, Army Secretary Ryan McCarthy said Jan. 10.

Hypersonic missiles — and the means to defend against them — are the Pentagon’s No. 1 research-and-development priority. It has been pumping large sums of money into a variety of efforts.

The Army is teaming with the other services to advance the technology, with the hopes of fielding systems in the early- to mid-2020s.

“We have a joint partnership across the entire Department of Defense between the Navy, Air Force and Missile Defense Agency” for R&D, McCarthy said during remarks at the Brookings Institution in Washington, D.C. “We're investing billions of dollars across this future years defense plan … [and] looking at even increasing the profile over the next couple budgets.”

However, missile manufacturers and other suppliers need to do more to boost their manufacturing capability, McCarthy said.

“What we need to see is industry step up,” he said. “They've got to come forward and … first and foremost, invest the time to work with our national lab network to understand how we've come forward with these technologies. But they're going to have to make investments to be able to produce these at scale.”

Hypersonic weapons — which will travel at speeds of Mach 5 or faster — will be challenging for missile defenses because of their quickness and enhanced maneuverability. McCarthy said they are a game-changing capability with offensive and defensive implications for the world’s militaries.

The United States could deploy these systems in the Indo-Pacific region to deter China and more effectively wage war in the event of a conflict, he noted. The Senkaku or Ryukyu Islands or the South China Sea are potential areas where they could be based.

“Because of the extraordinary speed and lethality of that capability, … from an offensive standpoint it creates dilemmas that would disrupt any [adversary’s] decision cycle,” he said.

Great power competitors China and Russia are developing their own hypersonic missiles. To defend against such weapons, advanced interceptors and other hardware aren’t the only critical tools, McCarthy noted. Robust sensing and command-and-control technologies are also essential.

“Just how fast can you find [the enemy missile] and then cue something to kill it?” he said.

Artificial intelligence will likely play a role in counter-hypersonic systems because the operational timelines will be so short, he said.

“The dilemma is that if you don't have … artificial intelligence-like capabilities, because of the speed at which the munition can travel you can't find it, sense it or shoot it because it will be there within a couple of minutes,” McCarthy said. “This is an extraordinary capability that a lot of countries are investing enormous national resources against, and it's going to change warfare.”

Re: Army Pushing Industry to Invest in Hypersonics Manufacturing Capabilities

There is a huge disconnect here. MGM-166 LOSAT / CKEM is already a Mach 6.5 + compact Hypersonic missile developed in the 1990s-2000s, meaning the U.S. Army had a miniature Hypersonic missile out to five miles for decades. So...both anti-tank programs were cancelled...so....what is the argument about "Reinventing the Wheel" again when LOSAT / CKEM should be brought down from the shelf, dusted off, and reused as an anti-missile missile? The logic here is flawed.

As for Hypersonic missile defense, that's been covered many times over the decades and poor decisions, no decisions, politics, or lack of funding produced nothing. The 747 Airborne Laser was cancelled and chopped up. Instead of mothballing it and gutting it for the highly toxic chemical stew containers inside, the 747 was actually demolished. One needs a laser against cruise missiles and Hypersonics and the speed of light is the best defense. The 747 ABL could be reborn, but that requires constructing an entirely new 747 and the 747 line is now discontinued.

The other defense of using IDF's "Arrow" missiles were tested and never bought. The "Arrow" has a speed of Mach 9 and ranges from 25 to an unprecedented 620 miles! The latest "Arrows" have even better performance! THAAD-Extended Range has three times the performance envelope of THAAD. Therefore, some of this article's news is half-true or "Political Pork" because prototypes for Hypersonic Defense already existed and were tested and never purchased decades ago.


Locam at 2:08 PM
Re: Army Pushing Industry to Invest in Hypersonics Manufacturing Capabilities

What is being discussed are hypersonics that go nearly 1000 to several 1000 miles so a 5 mile range anti-tank missile isn't applicable not matter what its speed is; hence the discussion of why industry needs to get more involved. As for the 747 airborne laser, where do you put it and how long does it take to take-off and get into position to fire at something coming in at Mach 5+ and isn't trackable after launch again? This is about detection and right now the incoming hypersonic warhead is undetectable and when it is detectable you've seconds to react. Arrow, Patriot, and THAAD can't track these for their missiles to respond and related time of flight means by the time someone finally detects the incoming warhead and pushes "fire" the warhead has already hit the target. Claiming pork or half-truths or "we had defenses decades ago (against what I might ask since until recently/this decade there weren't any hypersonic threat outside ICBMs)" is a cop out.