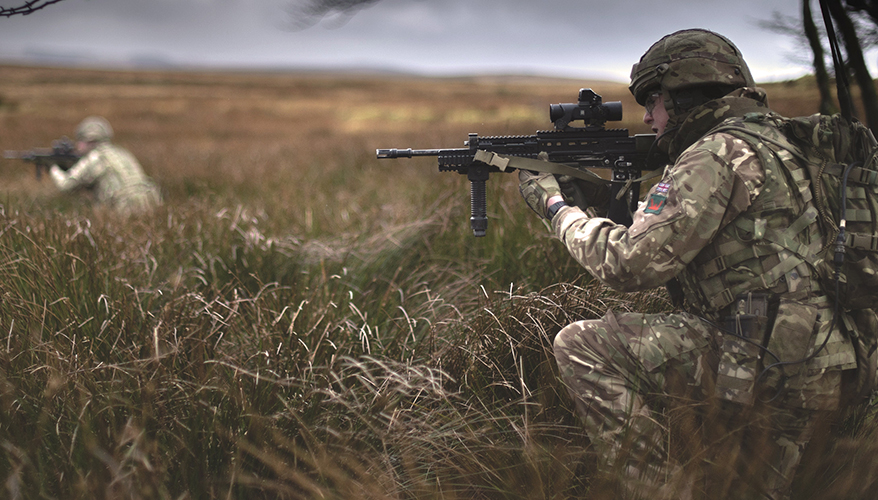 LONDON — Like the United States, the United Kingdom is now focused on competing with advanced adversaries, the island nation's deputy chief of defence staff for military capability said Sept. 9.

“Gen. Mattis said last year [that] the world is awash in change, defined by increasing global volatility and uncertainty, with great power competition between nations becoming a reality once again,” Knighton noted. Mattis also “said that our competitive edge is eroding in every domain — land, sea, space and cyberspace — and it is continuing to erode.”

The United Kingdom agrees with that assessment, Knighton said during DSEI’s strategic conference.

Mobilization, modernization and transformation within the U.K. military are key elements of the nation's response to these growing threats, he said.

“The importance of operational tempo and the need to be able to react quickly are … leading us and our NATO allies to refocus on traditional issues of resilience, readiness, availability and sustainability,” he said. “This is at the heart of the U.K. mobilization plans.”

The armed forces must also modernize, he said. “We need to deliver new and different capabilities that will help us to overcome” challenges.

In particular, the United Kingdom must be able to operate in contested environments, Knighton noted.

“Improving our lethality and survivability will be key in enabling us to project power and to deter and threaten our adversaries,” he said.

The halls of DSEI — which feature more than 1,600 exhibitors — are filled with such technologies, including novel weapons such as swarms of drones, he noted. “These are going to be critical parts of our inventory in the future."

However, success won’t be just about having the best weapons, he noted. The military must have the ability to make faster and better decisions be leveraging data and information, he said.

Knighton noted that other nations, such as Russia, are already making large investments in artificial intelligence technology, adding that Russian President Vladimir Putin has said that the country that leads in AI will become the ruler of the world.

The United Kingdom wants to innovate faster, but recognizes that while technology breakthroughs previously took place in defense research organizations, they are now coming from the private sector, Knighton said.

“A combination of these factors is driving a requirement to adapt much faster than we’ve been used to over the last few decades,” he said. “Our ability to innovate — which we define as our ability to generate ideas and put them rapidly into practice — will be an essential part of this response.”

Knighton noted, however, that tapping into innovation won't be easy as some might think. “Too often I think we seem to [try to] sprinkle innovation magic to solve difficult” problems, he said. “Doing innovation effectively, at scale in a complex bureaucracy with long and well-established cultures … is hard.”

The U.K. Ministry of Defence has challenged itself to do better.

“Buying a few commercially available bits of kit to special forces soldiers is not ambitious enough, but it is a start," he said.

Since 2016, the defense ministry has invested more than 65 million pounds in over 600 initiatives to tap into innovation. Like the Pentagon, it is trying to attract nontraditional suppliers, he noted. These organizations, along with larger companies and academia are key to a vibrant and broad ecosystem that lays the groundwork for technological success, he said. However, the ministry knows it must do more to appeal to smaller firms.

“It can be difficult to deal with defence, particularly for small- or medium-sized enterprises,” he said. “Our processes can be slow, risk averse and full of boiler plate solutions.”

Knighton noted that the government understands the problem and is working to transform its acquisition practices.