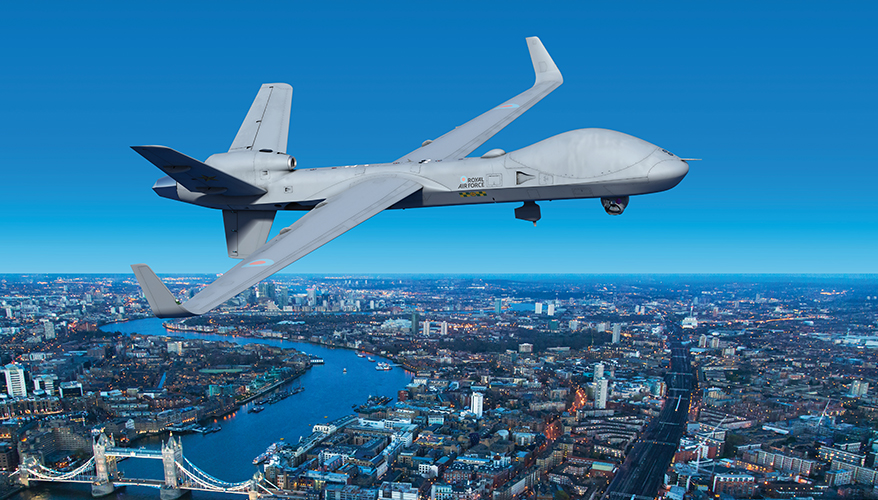 LONDON — The United Kingdom’s Royal Air Force is interested in a maritime version of its upcoming Protector medium altitude, long-endurance unmanned aircraft, the chief of the service said Sept. 11.

The RAF is in the process of certifying a version of General Atomics Aeronautical Systems Inc.’s MQ-9B SkyGuardian drone it is calling the Protector RG Mk1. The company announced a direct commercial sale contract to the Ministry of Defence here at the Defence and Security Equipment International conference to complete the testing and evaluation phase that will ensure the aircraft can fly in civil airspace.

Air Chief Marshal Sir Stephen Hillier said the contract was worth 100 million pounds and that “it is a key milestone towards the delivery of this important next-generation capability.”

“Protector exemplifies the benefits that military-industry partnering can bring. Through the embedding of experienced RAF operators in the program, we are helping bring a world-leading capability to life. It will provide the RAF with a remotely piloted air system — equipped with British-designed and built weapons – that can operate worldwide for up to 40 hours,” he said in a keynote speech.

“And even better I am pleased to confirm that we are already talking with international partners about how we develop capability even further including in the maritime domain,” he added.

The contract includes X-band satellite communication system verification, training material development and logistics planning, a GA-ASI statement said. Delivery of the aircraft is set to start in the early 2020s. Meanwhile, the RAF is using two company-owned MQ-9Bs and a cockpit as testbeds. The contract will include integrating an onboard detect-and-avoid system, Due Regard air-to-air radar and processor, the statement added.

“The testing and evaluation phase of the Protector program is an important element that ensures the safe delivery of this next-generation capability,” RAF Group Capt. Lyndon Jones, Protector program director, said in the statement.

Current plans call for the United kingdom to purchase 20 Protectors and to outfit them with Brimstone missiles.