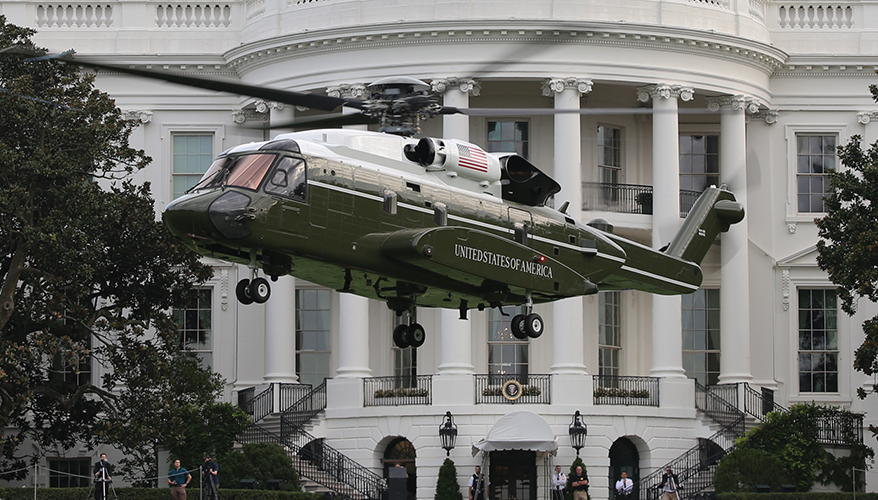 The Marine One presidential helicopter replacement flew into the public eye after making its public debut at this year’s Fourth of July celebration in Washington, D.C.

Based on Sikorsky’s commercial S-92A Federal Aviation Administration-certified helicopter, the VH-92A is a dual-piloted twin-engine aircraft slated for initial operational capability next year.

It is designed to replace the aging helicopter fleet of Sikorsky VH-3D Sea Kings and VH-60N White Hawks that have been supporting the president since the 1970s and 1980s.

“The VH-92A aircraft will increase performance and payload over the VH-3D and VH-60N,” Col. Eric Ropella, the Marine Corps VH-92A program manager, said in an email.

“It will provide enhanced crew coordination systems and communications capabilities and will have improved maintainability and reliability that will reduce operating and lifecycle costs over the current fleet.”

Sikorsky, which is owned by Lockheed Martin, was first awarded a $1.24 billion fixed-price incentive engineering and manufacturing development contract in 2014 for two test aircraft and four production aircraft after a high-profile and costly cancelation of a previous attempt to replace the aircraft in 2009. In June this year, the company was awarded a $542 million contract to build six helicopters for Lot 1 low-rate initial production, according to a Navy news release.

“Optimizing commercial practices, the VH-92A will provide safe, reliable and timely transportation with mission-critical communications that will support the security of our nation,” James Geurts, assistant secretary of the Navy for research, development and acquisition, said in the release. “I am proud of the combined government and contractor team who has worked so hard to transition this program into initial production and did so at over $1 billion less than the program’s cost baseline.”

The government began pursuing a Marine One replacement — which was deemed the VH-71 — when a mission needs statement was approved in 1999. A contract was awarded to a Lockheed Martin-led consortium that included AgustaWestland and Bell Helicopter. However, that program was canceled in 2009 due to schedule delays, performance issues and increased cost estimates.

The VH-71 cost estimates increased from $6.5 billion in 2005 to $13 billion in 2009, according to the Government Accountability Office.

In 2009, then-President Barack Obama labeled the replacement effort as a program that had “gone amok,” arguing that the current fleet of helicopters “seems perfectly adequate,” the New York Times reported. At a White House meeting, the late Sen. John McCain, R-Ariz., highlighted the program as an example of military overspending.

The “helicopter is now going to cost as much as Air Force One,” McCain said, according to a Congressional Research Service report titled, “VH-71/VXX Presidential Helicopter Program: Background and Issues for Congress.”

“I don’t think that there’s any more graphic demonstration of how good ideas have cost taxpayers an enormous amount of money,” McCain said.

In 2012, the Navy kicked off a new replacement program after completing an analysis of alternatives based on new requirements and acquisition approaches.

The Navy is acquiring 23 VH-92As. Initial operational test and evaluation is slated for mid-2020 and initial operational capability is scheduled for late 2020. The helicopter took its first flight in 2017, according to Lockheed Martin.

“If they’re entering production and the program is on time and on schedule, then that’s a really good sign,” he said. “Typically where you see the delays is when they come up with the prototypes and they start doing testing and they begin to identify deficiencies. … We’re not seeing that in this program right now,” he added.

The program office is working to improve the aircraft’s landing zone suitability, an issue that was outlined in the GAO’s 2018 report on the program, “VH-92A Program is Stable and Making Progress While Facing Challenges.”

“The lawn is a highly visible, size-constrained landing zone where damage to the White House grounds needs to be minimized,” the report stated. “There is a possibility of increased cost and schedule delays if the program has to retrofit produced aircraft.”

A September 2018 test left the White House South Lawn grass discolored after multiple landings and takeoffs, according to Ropella. The aircraft did not experience this problem during additional test and training events in March and June, he noted.

The GAO noted the lawn damage issue in its recent report, “Presidential Helicopter: Program Continues to Make Development Progress While Addressing Challenges,” stating that the “program has still not fully met this requirement and its assessment of this risk has increased since our last report.”

Sikorsky expects to have a solution for this requirement by November 2020, the report said, quoting program officials.

“If you were to land any heavy helicopter with two engines in that class on a lawn like the White House’s, yeah, there are going to be issues,” he said.

Royce said the aircraft has a very unique set of mission requirements.

“I’ve never heard of it before being a factor in the development of programs that they had to land on grass without damaging the grass at all,” he said.

To fix the issue, the Navy is working with Sikorsky to determine if it needs to pursue materiel or non-materiel solutions to prevent further discoloring of the lawn, Ropella said.

If a materiel solution is needed, “the government program office, along with external stakeholders, will determine the appropriate solution and the incorporation schedule,” he said.

Additionally, GAO noted that the helicopter’s mission communications system, which is a subsystem for on- and off-board communications, is unable to connect to secure networks due to security protocol changes. The service plans to have this resolved by January 2020 in time to incorporate changes into the four production systems under the development contract, the report stated.

Ropella said the communications system is on track to support initial operational test and evaluation.

The GAO also noted the cost estimate for the program decreased from $5.18 billion to $4.95 billion for 23 helicopters since April 2014.

“The cost decrease is due to stable baseline requirements, a low number of design changes, continuous adaption of schedule efficiencies, and streamlined processes and reviews,” Ropella said.

Dave Banquer, director of the VH-92A program at Sikorsky, said in a statement that the aircraft is on track to meet all required milestones on or ahead of schedule. Four of the aircraft have been transferred into government testing at Naval Air Station Patuxent River, Maryland, he said.

“The men and women of Sikorsky treasure our legacy of building and providing helicopter transportation for every president and commander-in-chief since Dwight D. Eisenhower,” he said. “We are proud to continue that legacy with the VH-92A helicopter.”

GAO said the program has delayed some milestones, such as the low-rate production decision, but has remained within its approved schedule.

“Although this remains within the approved schedule, the program will have less time than planned between the end of development testing and start of operational assessment,” the report said.

These delays were due to shortages of parts, small design changes and airworthiness certification of unique parts, Ropella said.

“The prime contractor and the government program office were able to mitigate these delays which has led to the last two aircraft being provided ahead of contractual dates,” he said.

Aboulafia said the service seems to have learned a lot since the last iteration.

“They’re keeping this to far more of an off-the-shelf product with all of … the add-ons necessary for the mission,” he said. “But they’ve conscientiously avoided making serious design changes that affect the architecture of the helicopter. That’s good.”

For the VH-92A, the Navy switched acquisition strategies by modifying an in-production aircraft, GAO noted. The service focused on incorporating “an executive cabin interior and unique mission equipment such as communications and mission systems, and limiting modifications to the aircraft to avoid a costly airworthiness recertification.”

Pilots are preparing to operate the new aircraft using a flight training device at Marine Corps Base Quantico, Virginia. The flight simulator has been in use since November 2018 and will be modified to remain as representative of the aircraft as possible, Ropella said.

The device “is not only being used to train new VH-92A pilots, but was also instrumental in allowing VH-92A operational test pilots to rehearse flights that were conducted during the [pre-Milestone C] operational assessment,” he said.

Additionally, the service has set future requirements for the aircraft, he noted. These include installing a fifth display in the cockpit and a modified forward airstair door. Airstairs are the outside steps that allow passengers to enter the aircraft. Ropella said these will provide an improved view of individuals entering and exiting the aircraft, reduce pilot workload and improve situational awareness for the pilots.

These features are slated to be incorporated into the low-rate initial production Lot 1 aircraft after initial operational capability is achieved, he said.

Re: Marine One Replacement Preps for Initial Operational Capability

If one looks at the original green S-92M mockup, it has large side windows. The S-92M's fuselage is 40% composite, offering some kinetic bulletproofing. What the author envisioned was making the S-92M into some sort of USSOCOM AC-130 "Spooky" gunship with fixed side-firing guns and cannons and drop tubes for UAVs and Griffin ATGMs that can be reloaded inside. Now with a DoD Program of Record, a S-92M "Spooky" might give Special Forces a gunship with a greater strike range, speed, loiter time, and performance than the TF-160 AH-6Ms.